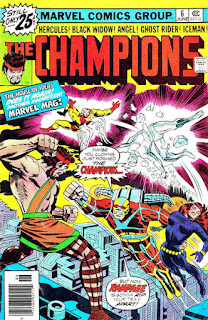 In a Nutshell
The Champions name a team leader as they continue their fight with Rampage!

Plot
With Rampage threatening Angel, the Champions feign retreat, but loop back around and turn the tide, driving Rampage off. Hiding on a rooftop, Rampage changes into normal clothes, then slips past the Champions amongst other escaping bystanders. As the wounded Ivan is put in an ambulance, Angel declares that the team needs a leader, and nominates Black Widow; the group then heads to the hospital with Ivan. Later, seeing news footage of Rampage's attack on TV, his former lawyer recognizes him, and calls the police. At his company office building, Rampage decides to dismantle his suit before he's caught, but just then, the police arrive, prompting him to blast out of the building using an experimental jet pack. Hearing reports of the ensuing battle between Rampage and the police on the radio, Iceman informs the Champions and they leave to resume their fight with him. When they arrive, Rampage realizes he is over-matched and triggers an explosion with his jet pack. But Rampage is caught in and badly injured by the ensuing debris, while his lawyer realizes he can now sell the company to pay off Rampage's creditors and still turn a tidy profit.