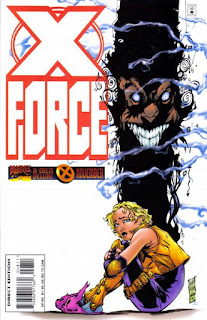 In a Nutshell
X-Force holds an intervention for Boomer.

Plot
Boomer goes downstairs in the middle of the night to find the rest of X-Force - as well as Cannonball - waiting for her. They tell her they're concerned about the time she's spending with Sabretooth, and are intervening in order to convince her to stop. They remind her of Sabretooth's participation in the slaughter of Caliban's people, but Boomer throws back Caliban's own villainous past, as well as Sunspot's time as Reignfire, in their faces. Warpath insists Sabretooth is pure evil, but Boomer argues that no one is beyond redemption. Shatterstar is unconcerned: if Boomer thinks she can handle Sabretooth, then it's none of their concern. Meanwhile, Holocaust is busy slaughtering everyone on a small South Seas island when Sebastian Shaw shows up, offering him a part in a plan against Shaw's son. Back at the X-Mansion, X-Force tries to convince Boomer she's going to get killed, and gives her an ultimatum: stop seeing Sabretooth, or leave the team. Xavier then enters, and when Siryn reminds him of the second chance he gave Magneto, he admits he was wrong to do so. Boomer collapses, finally accepting that she has to give up Sabretooth, just like she gave up on her father. Later, she goes to the Danger Room one last time. She calls out to Sabretooth, asking him to tell her all the time they spent together wasn't for nothing. But he gives no response, and merely smiles in the darkness.

Firsts and Other Notables
This issue details X-Force's intervention on Boomer, trying to make her realize the danger in her friendship with the seemingly-docile Sabretooth. Part of the general move across the line to bring the "Sabretooth in the mansion" subplot to a close, this effectively marks the end of that friendship, as Boomer relents in the face of her teammates arguments. 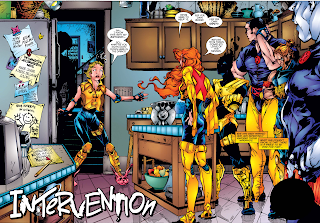 To that end, the conclusion of the issue seems to suggest that Sabretooth's returned to a full-on villainous state. 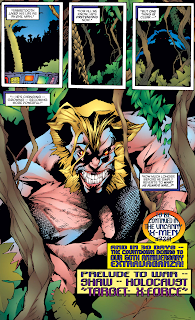 Sebastian Shaw, last seen in X-Factor #67 when he was killed by his son Shinobi, returns in this issue, without explanation, beginning another run as a recurring villain in the X-books going forward. 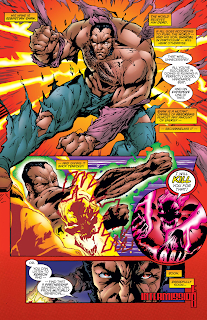 He recruits Holocaust, appearing here for the first time since his fight with Exodus in X-Men #43 (thereby confirmed he, at least, survived the fall to Earth), for a plan involving revenge on his son, all of which is setup for the next couple issues. 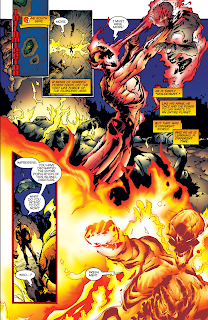 A Work in Progress
When Caliban talks about Sabretooth’s past as a killer, Boomer points out Caliban’s past as a Horseman of Apocalypse, and his kidnappings of Jubilee & Shadowcat (no mention is made, however, of their time hanging out together as wards of X-Factor back in the day). 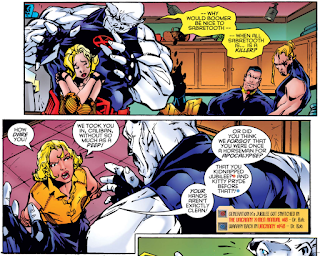 She also points out Sunspot’s more recent villainous past as Reignfire. 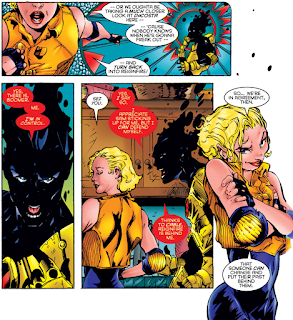 It’s said here that Reignfire was a separate entity from Sunspot, a reminder we still haven’t gotten the full story of that yet.

When Xavier becomes involved in the intervention, Boomer points out the fact that he handed over his school to Magneto at one point, and Xavier admits he now knows he was wrong to do it, a somewhat harsher reaction from Xavier even post-"Fatal Attractions" (but which serves the argument this particular story is trying to make, that Sabretooth is irredeemably evil & Boomer is endangering herself by hanging out with him). 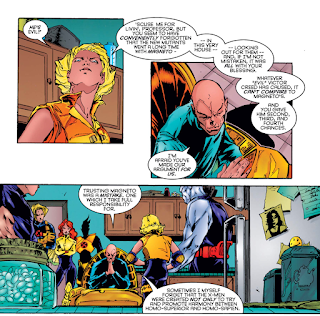 In the end, Boomer relents, expressing sorrow at giving up on Sabretooth just like she did her father & herself. 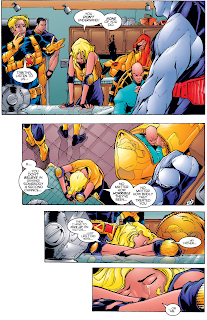 Austin's Analysis
I don't know what real interventions are like, but the depiction of one here is, at least, roughly consistent with what I've seen in other movies & TV shows. The real problem is the muddied way this whole "Boomer's friendship with Sabretooth" storyline has been presented, as both a mystery (is Sabretooth faking it?) and a certainty (he's evil and Boomer is putting herself in danger hanging out with him). If the idea is supposed to be that everyone thinks he's just faking it (rightly or wrongly, though it seems like with all the telepaths in that mansion, someone should know if he was faking it), then certainly, the treatment of Boomer in this issue is warranted.

But if we're meant to doubt that, and question whether he has truly reformed (or at least been rendered docile by a traumatic brain injury, which isn't really the same thing), then all of Boomer's counter-arguments about how the X-Men are willing to forgive and give second chances to everyone but Sabretooth are perfectly valid (this mixing of approaches could also work if SOME characters were on Boomer's side and others not, but it's presented very much as Boomer against the world, both here and elsewhere). The plotline ultimately is trying to have it all - the mystery of Sabretooth's condition and the moral certainty of Boomer's interveners - but both are fundamentally at odds with the other. As a result, this issue, when the storyline (at least from Boomer's perspective) comes to a head, suffers: because the plotline is trying to present both Sabretooth's condition as a mystery and Boomer's embrace of him as dangerous, it's not entirely clear whose side the readers are supposed to be on here.