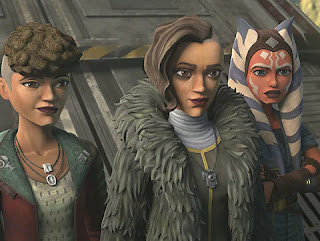 The Moral of the Story
Mistakes are valuable lessons often learned too late.

Plot
As Trace shows off her ship, Silver Angel, to Ahsoka, Rafa arrives at the hanger, needing Trace's help: she lined up a delivery job, but her contact for the pilot & ship has dropped out, and she needs the Silver Angel & Trace to do the job instead. Ahsoka volunteers to come along, something which doesn't sit well with Rafa. Soon, the three depart, and it quickly becomes clear that Trace has never flown a starship before, as she nearly avoids a confrontation with the Republic military on the way off planet. Rafa directs them to Kessel, explaining that they've been hired to pick up a shipment of unrefined spice. They meet Kinash Lock, the majordomo of Kessel's King Yaruba, and are directed to a nearby mining pit where they pick up the shipment. After leaving Kessel, Rafa announces they're delivering the spice to the Pyke Syndicate. Ahsoka & Rafa argue over what to do with the spice, which prompts Trace to simply dump it in Hyperspace, something both her sister and Ahsoka agree just made their situation worse. Ahsoka comes up with a plan, however, and when they arrive on Oba Diah, Ahsoka uses a Jedi mind trick on Krim to make him process the exchange without any questions. But one of his associates remains suspicious, and discovers the empty cargo containers just as Trace prepares to depart. With the Pykes now aware of the missing spice, the Silver Angel is caught in a tractor beam as patrol ships quickly surround it.

Firsts and Other Notables
This episode features the Pyke Syndicate, one of the handful of various criminal factions running around the galaxy (like the Hutts and Black Sun). The Pyke's previously appeared in season 5, as well as in Solo.

The two Pyke bosses, Marg Krim & Fife previously appeared in the novel Dark Disciple & the comic book Darth Maul: Son of Dathomir, both of which were based on unused Clone Wars scripts.

A Work in Progress
Anakin's presence in the skies above Coruscant in this episode confirm it takes place before the Outer Rim Sieges and the earlier "Bad Batch" episodes of the season. He does the same "vaguely senses the presence of someone he knows trying to pass by, let's them pass" thing he does as Vader in Return of the Jedi.

Admiral Yularen, who will later appear in Rebels and, retroactively, in A New Hope (he's considered to be one of the Imperial officers sitting around the conference table when Vader Force-chokes Admiral Motti), also appears here, alongside Anakin.

Did You See?
The design of the Silver Angel cockpit was created during season six and when it appeared like the show was done, it ended up getting re-purposed for the cockpit of the Ghost in Rebels, as the animators thought it was too good a design to waste.

What's the Deal With Kessel?
First mentioned in A New Hope and canonically depicted in Solo (which also used the Maw the characters here are shown traveling through on the way to the planet in one of its action set pieces), Kessel is a prison world run, at this time, by the Pyke Syndicate (with the Republic and later the Empire largely turning a blind eye to their actions), who use the prison labor to mine the planet of valuable spice (the generic Star Wats drug; like Trace in this episode, the bounty on Han Solo was caused by him dumping a shipment of spice, albeit for much better reasons). Interestingly, in this episode, Ahsoka, Trace & Rafa spend most of their time on the unspoiled half of Kessel, a verdant world where the rich live, profiting off the prison labor in the spice mines on the other side of the planet, making it one of the few Star Wars planets to feature more than one climate/environment.

Austin's Analysis
I try not to fall into the trap of thinking any story in a serialized narrative has to have a big, notable impact on the overall narrative for it to have merit, but at the same time, it's hard not to continue to be disappointed in the scale of this particular arc. This episode is an improvement on the previous one, with a wider reach (bringing the series to Kessel for the first time and looping in the Pyke Syndicate) and bigger stakes (even if raising of those stakes is predicated on a monumentally stupid action by Trace - I don't care how naive you are or how much you love your ship, no one could possibly think just dumping the spice you got from a prison planet and are taking to a criminal syndicate is the best way to resolve a dispute over what to do with that spice), and both Rafa & Trace are (some of Trace's actions aside) developing into interesting characters and intriguing foils/allies (at various times) for Ahsoka to play against as she tries to find her place in the galaxy without the Jedi. Plus, the use of the almost of the almost-literal cliffhanger, something of a novelty for this series (it often uses serialized mini-arcs, but each episode rarely leads quite so directly into the next), is a fun hook for the next episode. But nevertheless, as the final season reaches its halfway point, it's hard not to wish the series was doing something just a little bit bigger, involving more series' regulars, and more engaged with the larger arc of the war and the run-up to Revenge of the Sith and the series' conclusion, or at least pushing Ahsoka a little further, a little harder, down the path towards the character she'll be in Rebels.