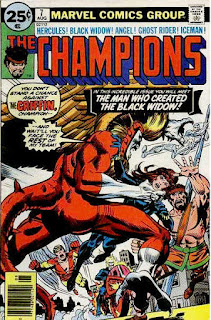 In a Nutshell
Darkstar debuts as Black Widow's past resurfaces!

Plot
At the Champions' temporary headquarters, Iceman & Hercules are suddenly hit by a rocket. They are able to disable it, after which Ivan & Black Widow take it away for examination, while a shadowy figure watches from afar, hoping Ivan will deduce its origins. Meanwhile, at the hospital, Angel's lawyer is dismayed that the injured Rampage won't accept the Champions' financial aid. Just then, Griffin & Darkstar burst into the hospital and abduct Rampage. Angel & Ghost Rider pursue them, but the villains manage to fight them off & escape. Back at the Champions' base, Hercules & Iceman check for additional traps, with business manager Richard Fenster eager to ensure the upcoming ceremony goes well. The villainous Outcast, scouting the facility, uses the sudden arrival of a child looking for help to escape unnoticed. Elsewhere, Ivan & Black Widow find evidence in the missile that it was sent by their old mentor & ally Commissar Bruskin, who contacts them via a radio in the missile. Black Widow immediately tracks him down on a nearby rooftop, but before they can talk, Bruskin is blasted from behind by the Titanium Man!