The Moral of the Story
Trust placed in another is trust earned.

Plot
Plotting the retaking of Anaxes, Echo proposes a daring plan: sneak aboard the Separatist flagship using his knowledge & use their reliance on his algorithm to feed them false information. He assures the Jedi that Wat Tambor will have kept the loss of Echo to himself, out of fear for his profit margins, and Mace Windu reluctantly agrees to the plan. As Mace & Obi-Wan begin the assault of the Separatist ground forces, Echo, Anakin, Rex and the Bad Batch sneak aboard General Trench's ship. As Mace & Obi-Wan's forces breach the massive Separatist assembly plant, Trench puts in a call to Skago Minor for Echo's algorithm to direct his moves. Masking his location, Echo sends an order to send all droid forces to that area, intending to disable them all at once with a massive feedback pulse. After Echo does so, Trench learns Echo's orders came from aboard the ship, so he triggers a massive bomb beneath the assembly plant surface to wipe out the Republic forces. As Mace Windu works to defuse the bomb, Anakin confronts Trench for the disarming sequence, cutting off several of Trench's arms to get it. When Trench moves to attack Anakin, he kills him. Anakin then grabs the ship's self-destruct trigger, and as Mace disarms the bomb on the planet's surface, Anakin and the clones fight their way back to their ship, at which point Anakin lets Wrecker blow up Trench's flagship. In the aftermath of the battle, Echo decides his place is with the Bad Batch, and Rex salutes the group as they prepare to depart.

Firsts and Other Notables
Admiral Trench, one of the recurring Separatist bad guys whose absence from Revenge of the Sith (since, you know, he hadn't been created yet) likely meant he was due an untimely death at some point, dies this episode, killed by Anakin in a callback/foreshadow of Revenge of the Sith (in which he executes a similarly-disarmed Separatist leader).

Echo completes his arc and joins the Bad Batch at the conclusion of the episode (and while he's certainly an appropriately atypical clone w/quasi superpowers, he does seem like he and Tech check some of the same boxes...).

The original version of this episode had a scene at the end featuring the medal ceremony alluded to via dialogue in this version.

Did You See?
The Y-wings which performing a bombing run on the Separatists in this episode are part of Gold Squadron; a later flight of the same craft will use the same call insignia when attacking the Death Star in A New Hope. 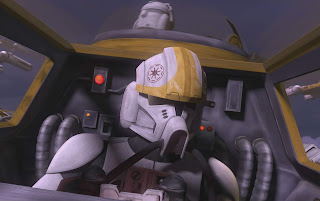 Austin's Analysis
Without a doubt, this is the best episode of the new season thus far, seamlessly balancing the series' signature style of action with engaging character moments. In splitting the focus between Anakin and the Bad Batch's stealth assault on the Separatist flagship and the larger battle on Anaxes, we get a mixture of action styles, both small-scale and more sweeping, not unlike the way the climaxes of Phantom Menace & Return of the Jedi shifted between different "scales" of conflict. And in the conflict between the Bad Batch & Echo (and Rex's unwavering faith in his compatriot) and Anakin's confrontation with Admiral Trench, we get some strong character work, the latter of which deliberately echoing (or, technically...pre-echoing...I guess) later events in Revenge of the Sith, when Anakin would once again stare down a defeated enemy leader and take similar, even more cold-blooded, actions. All in all, it makes for an engaging, well-balanced episode, a suitable (seeming) send-off for the bad batch, and a new season high.