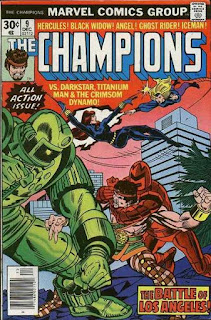 In a Nutshell
The newly-unveiled Champions are attacked by Crimson Dynamo and his allies in a battle that rages across LA!

Plot
Titanium Man & Griffin, led by Crimson Dynamo, attack the Champions inauguration ceremony, though only Angel & Hercules are on hand. However, Ghost Rider arrives in the midst of the battle, having dropped Rampage at the hospital, but the three are eventually overpowered by their opponents. Meanwhile, Ivan & Iceman trace Commissar Bruskin's black pearl to an abandoned warehouse. Iceman creates an ice tunnel to allow them to enter, but they are attacked by the returning villains, carrying the rest of the Champions as captives. As Iceman fights back, Ivan gets inside the warehouse. Black Widow attacks her jailer, Darkstar, but is unable to defeat her until Ivan bursts in, distracting her long enough for Black Widow to knock her out. Just then, the Crimson Dynamo enters and declares he will kill the fallen Champions if Ivan doesn't surrender. He then removes his helmet to reveal himself as Yuri Petrovich, Ivan's thought-dead son!