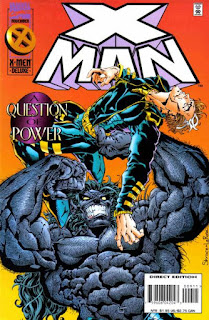 Plot
Having killed Rex, Dark Beast confronts Nate, impressed with the work Sinister did in creating him. He suggests he knows more about Nate's nature, and tries to persuade him to help rule this world. But Nate knows Dark Beast's reputation from their home reality, and a fight ensues. Nate is more powerful, but Dark Beast fiercer when in close range, and he wounds Nate, taunting him that Sinister created him to be a weapon, but the weapon doesn't need to remain powerful after it completes its task, explaining Nate's random drops in power. He says he can help Nate and offers him a place at his side again, but Nate is adamant and knocks out Dark Beast. Recalling there were people once before who could help him, Nate instead decides to seek out this world's X-Men, and heads off. Watching this unfold, Blaquesmith realizes he must warn Professor X of Nate's imminent arrival.

2nd Story
Blaquesmith races north in his ship, skimming over the water, intent of reaching Xavier ahead of Nate, but he is attacked by a larger craft. Outmatched, Blaquesmith fakes the destruction of his craft in order to get in one good hit on his opponent, disabling that vessel. He continues towards Xavier, uncertain who attacked him or why.

Firsts and Other Notables
Credited with the story idea, this is Jeph Loeb's final issue of the series, bringing to an end the short time in which he was writing a third of the X-books (he remains the regular writer on both X-Force & Cable). John Ostrander, credited with this issue's script, will take over as the new series writer next issue.

The centerpiece of this issue is the fight between Nate and the Dark Beast, the first meeting of two Age of Apocalypse refugees. In the course of their confrontation, Dark Beast reveals that Nate’s power fluctuations and physical limitations when using his powers is the result of failsafes Sinister put in him to prevent him from growing too powerful after taking out Apocalypse. He offers to help him overcome those limitations, but Nate decides (somewhat out of the blue) to seek out the X-Men for help instead, setting up the events of next issue. 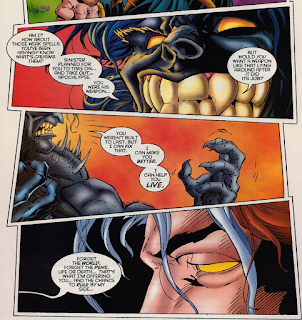 This issue is padded out with a second story featuring Blaquesmith fighting a generic futuristic-looking ship on his way to warn Xavier about Nate; there's not much to it, and as far as I know, the identity of his attacker has never been revealed (it reads very much like filler intended to pad out the issue).

Rex is confirmed in this issue to be dead, if you care.

A Work in Progress
Dark Beast reveals to Nate both Beast's own survival as well as Sugar Man’s (and that Rex is an agent of Sugar Man); they are not, as yet, aware that Holocaust also survived the destruction of their universe. 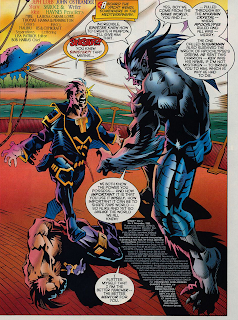 Austin's Analysis
Nate meeting up with a fellow AoA ex-pat is one of those "duh" plot points the series had to do before too long (it's such an obvious thing, you wonder if the book wouldn't have been better off if it had gotten here sooner, having Nate confronted by Sugar Man instead of by Sugar Man's dull proxy, Rex), but all the impact of the X-Man/Dark Beast meeting is robbed by the transition (seemingly at random) between Steve Skroce's work and the cruddy, nigh-incomprehensible, non-Skroce art. And while the art is the biggest problem here, the script does little to help; the notion that the physical limitations triggered by the use of Nate's power is a failsafe built into him by Sinister is an interesting one, but it's essentially a line of exposition stretched into an issue as he & Dark Beast spend the rest of it yelling back-and-forth at each other. There's also potential in the shared Sinister connection between the two (Beast, a pupil of Sinister's work and Nate, Sinister's greatest creation), but the script blows past that pretty fast. Strong art can carry an issue-long-fight and an engaging script can overcome but bad art, but neither are on hand for an issue in which its initial premise is its best part.