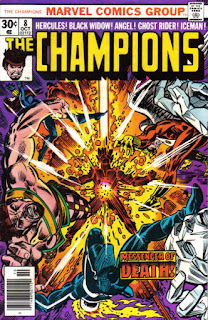 In a Nutshell
The Champions hold a public unveiling even as the Russian agents escalate their attacks.

Plot
Rampage arrives at the Champions headquarters bearing pictures of a captive Black Widow, announcing she's been captured by someone called the Outcast. His message delivered, Rampage's suit suddenly explodes. As Iceman puts out the ensuing flames, the Champions discover Rampage is still alive, prompting Ghost Rider to rush him to the hospital. Richard Fenster urges the remaining Champions to prepare for the team's public unveiling in a few hours. Ivan & Iceman decide to work on finding Black Widow, leaving Hercules & Angel to clean-up. Meanwhile, Black Widow awakens in abandoned warehouse alongside Bruskin to find herself a captive of Darkstar & Titanium Man. The two villains then leave and meet with Griffin and the leader of the group, the Outcast, wearing the Crimson Dynamo armor. Back at Champions headquarters, Ivan unveils the tracking device he's built to home in on the frequency of the black pearl carried by Bruskin, and the pair set out to follow the signal. Below, Angel, Hercules and Fenster greet the crowd gathered outside the building and Angel formally announces the formation of the Champions, but before the celebration can begin, the gathering is attacked by Titanium Man, Griffin, and Crimson Dynamo!