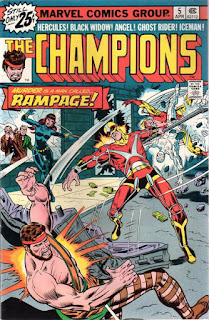 In a Nutshell
The Champions battle Rampage, villain of the recession.

Plot
Angel learns that he has inherited his recently-deceased parents' fortune, while at the same time, industrialist Stuart Clarke learns he is bankrupt, the result of competition from Stark Industries and the recent recession. Bitter, he knows just how to revive his fortunes. Later, Ivan worries that it might be too soon for Black Widow to join up with the new team Angel is forming, but she thinks working with a larger group might work out this time. At UCLA, Richard Fenster is fired, but Angel offers him a job as the business manager of the Champions, his new superhero team. Meanwhile, Stuart Clarke dons a suit of sophisticated armor he's created, and decides to rob a bank. Passing by, Iceman intervenes, but Clarke's exoskeleton overpowers him. The rest of the Champions arrive, but Clarke's strength rivals even Hercules', and when Angel is knocked out, Clarke grabs him and threatens to kill him if the rest of the Champions don't back off!