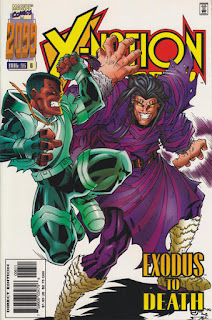 In a Nutshell
X-Nation battles Exodus as Halo City floods around them.

Plot
Standing triumphant over X-Nation, Exodus turns his attention to the Wild Boys. After defeating them, Exodus promises to take X-Nation out of Halo City and to a better world, then teleports away with the group. Shortly thereafter, the Ancient One and his disciple Strange arrive in the city, and Strange sets out after Exodus. Meanwhile, in the ruins of the Xavier Shelter, Xi'an tries to use his healing power on Nostromo, which triggers his Phalanx infestation to take over. Elsewhere, Reed Richards does his best to aid the evacuation of the city, while Exodus deposits himself and X-Nation across the city from where they started, his energy reserves depleted. Already growing suspicious of the man, when Exodus starts preaching anti-human rhetoric, X-Nation turns on him. Back at the shelter, Cerebra helps Nostromo free himself of the Phalanx, though he stills feels their pull. Elsewhere, Exodus incapacitates X-Nation, but the arrival of Strange creates an opening that allows X-Nation to free themselves. Twilight turns her power on Exodus, but he is able to overcome her sphere of influence, at which point Clarion sacrifices himself to save Twilight and drive Exodus away, who leaves with a warning to X-Nation not to cross him. With Exodus gone and the city flooded, Strange teleports the group out of Halo City.