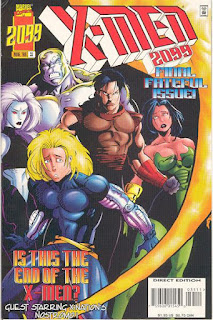 In a Nutshell
The X-Men defeat Vulcann and depart for the Savage Land as the series concludes.

Plot
Darkson & Vulcann deliver the unconscious Luna to the X-Men, triggering a fight. Meanwhile, Cerebra, Xi'an & Nostromo attempt to escape the flooding city via the service tunnels. Outside, Darkson telekinetically traps the X-Men aboard one of the boats fleeing the city, part of a mutant flotilla that Vulcann plans to direct Darkson to lead in a conquest of the world. Beneath the city, Cerebrea leads her companions to the secret chamber Doom showed her, in order to access its teleportation technology to send them to the X-Men. Elsewhere, after being seemingly killed by Vulcann, Fitz learns his mutation has transformed him into a being of pure energy. Outside the city, Cerebra, Xi'an and Nostromo are reunited with the rest of the X-Men, when an Atlantean warship suddenly surfaces and attacks the flotilla. The captive X-Men are knocked into the water. Xi'an frees them and they attack Vulcann & Darkson. Working together, Bloodhawk & Metalhead are able to kill Vulcann, at which point Fitz arrives and is able to knock out Darkson. The X-Men all climb aboard one of the surviving ships, where Cerebra & Xi'an announce they'll be leading the rest of Halo City's mutants to the Savage Land!