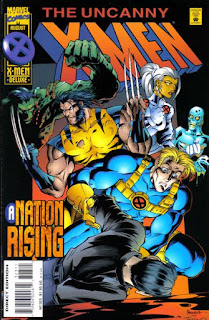 In a Nutshell
The X-Men are attacked by Gene Nation while investigating the nightclub massacre.

Plot
While Rogue & Iceman deal with a flat tire while on their road trip, Psylocke & Archangel train in the Danger Room before being interrupted by Gambit, who regains consciousness, staggers into the room, and asks after Rogue before passing out. Outside, Cannonball takes Sabretooth for a walk, and the pair run into Wolverine, who threatens to kill Sabretooth if he turns out to be faking his docility. He is interrupted by Storm, who asks Wolverine to accompany her and Cannonball into the city in order to investigate the recent nightclub massacre. In the city, Beast confronts Tish Tilby about her decision to go public with news of the Legacy Virus, while outside city hall, Graydon Creed uses the nightclub massacre to whip an anti-mutant crowd into a frenzy. Around the corner, Charlotte Jones emerges and leads the X-Men inside to the morgue. In the desert, Iceman presses Rogue on what she saw in Gambit's mind, after which he is taunted by a vision of Emma Frost. Back at the city morgue, the X-Men meet with the coroner, but Wolverine senses something off with him, and attacks, causing the mutant Sack to emerge from the coroner's now-dead body. Sack is soon joined by his companion Vessel, who says that while Gene Nation is dedicated to the destruction of human society, they will gladly kill the X-Men in order to do so.

Firsts and Other Notables
Following on the heels of Hemingway in Generation X last month, two more members of Gene Nation debut in this issue, Sack & Vessel. The former has the ability to possess dead bodies, while the latter draws increased strength, size and durability from the physical & psychic residue of dead bodies. 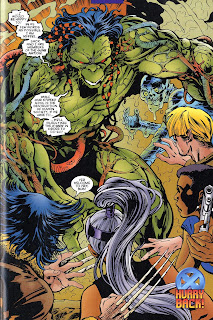 Gambit emerges from his coma this issue, and immediately asks after Rogue before passing out; Psylocke is concerned by the fact that she sensed danger shortly before he appeared, beginning a minor "Psylocke is wary of Gambit" subplot (the evil she senses is, presumably, the same as the secret that drove Rogue away - that he participated in the Morlock Massacre - but it's not terribly clear why she would only sense that particular evil in him now). 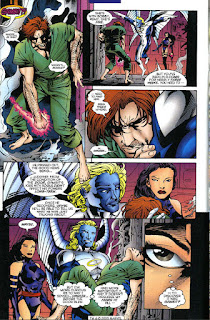 Following the news of his "graduation" in X-Force #44, Cannonball makes his debut as one of the X-Men in this issue, helping take care of the now-docile Sabretooth and joining Storm & Wolverine on an investigation in the city. 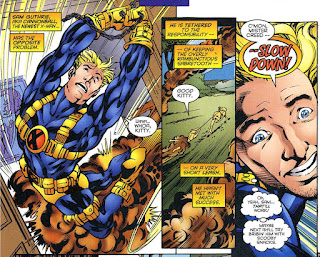 Graydon Creed’s upcoming presidential run essentially begins here, as he uses the nightclub massacre to whip up anti-mutant sentiment outside city hall. One of the people watching (whom the Marvel Chronology Project credits as being Noah Dubois, the same person who observed Cyclops & Phoenix last issue and will turn out to an agent of the interdimensional law firm Landau, Luckman & Lake) sees reflections of Hitler in him. Creed's campaign will run in parallel to all the Onslaught build-up, until he is mysteriously assassinated shortly after that story (thereby creating a dangling mystery that won't be resolved for years). 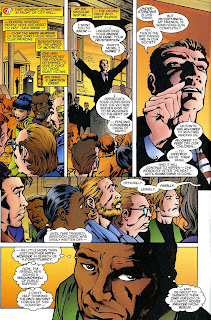 Joe Madureira is still recovering from drawing four consecutive issues during "Age of Apocalypse"/playing Sega, so Bryan Hitch fills in on pencils. Madureira does contribute the cover to this issue, though.

A Work in Progress
Rogue & Iceman’s toad trip hits a snag when they blow a tire, and it’s revealed that Rogue only let him come along if he agrees to a “no powers” rule. 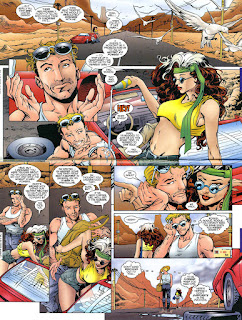 Lobdell continues to really try and sell the idea that the massacre last issue was especially horrific, as Archangel (who, keep in mind, was horrifically injured himself during an earlier massacre) is still being affected by what he saw. 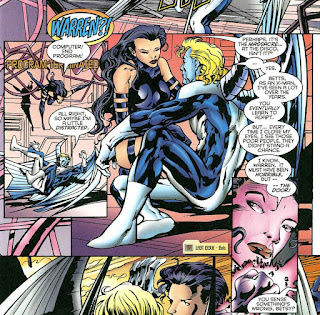 Sabretooth, tendered docile by Wolverine’s attack, has healed enough that he can move about the mansion grounds, which of course puts him face to face with Wolverine. 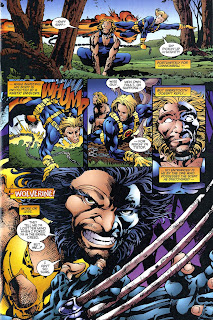 Wolverine is impressed that Cannonball stands up to him. 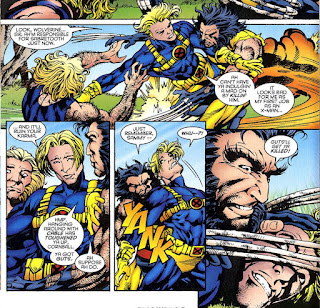 The Hudsons’ upcoming visit in Wolverine #92 is mentioned (though the issue number is missing from the footnote for some reason). 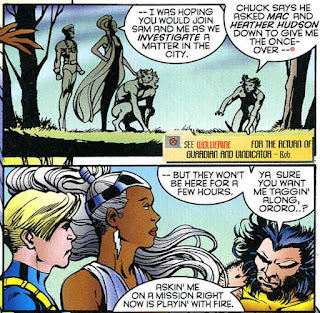 Iceman hallucinates being taunted by Emma Frost (OR DOES HE???). 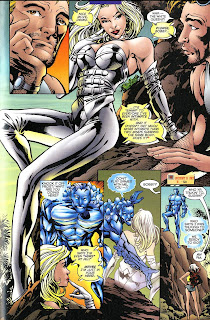 The Grim 'n' Gritty 90s
Marvel runs a survey in this issue filled with glorious 90s-ism, like assuring reads its okay to photcopy the page (in order to preserve the value of the book no doubt) and asking if the respondent pays for internet service. 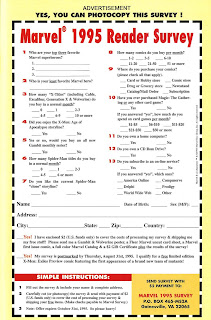 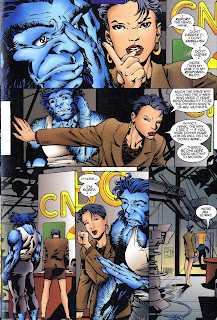 For Sale
I was wrong; *Waterworld* trading cards are the most 1995 thing ever. 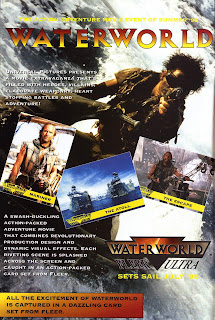 It's in the Mail
A letter in this issue complaining about the current state of the X-Men wouldn’t look out of place on a present day message board (or broken down in a tweet thread). 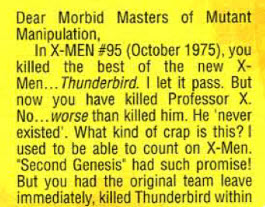 Austin's Analysis
Still in "mellow mode" following "Age of Apocalypse", this is essentially a Classic Claremont Quiet Issue, as Lobdell focuses on various character interactions and limited action. The Gene Nation plotline that is, technically, the narrative spine of this batch of issues is advanced, as the X-Men investigate last issue's massacre and conclude the issue by coming face-to-face with a pair of Gene Nation members for the first time, but it's clear the quieter stuff before that is the guts of the issue. Ironically, considering how much his name will become synonymous with the dominance of "widescreen" action art in the 00s, Bryan Hitch here continues his strong showing following his work on X-Men Prime. Not yet working in that widescreen style, his art here is a sort of blend of Alan Davis by way of Barry Windsor Smith, and it works especially well in this issue in spite of (or perhaps because of) the quieter, less incident-packed story.