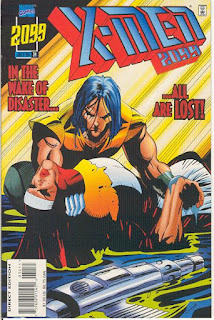 In a Nutshell
Vulcann makes his move as Halo City floods.

Plot
Inside a hidden fortress in the Pacific Northwest, Vulcann ages the captured Joaquim to physical adulthood. Meanwhile, the X-Men assist in the evacuation of the flooding Halo City, after which Book advises them that an alien object in orbit around the planet is causing the seas to rise, while Krystalin worries about the still-missing Meanstreak. At the Unicelo building, Xi'an searches through the rubble, looking for the body of the Foolkiller, before leaving to check on the Sisterhood of the Howling Commandments at the Xavier Shelter. At the Rasputin Housing Complex, Metalhead tries to comfort a distraught Rosa when Vulcann and the grown Joaquim appear. Joaquim telekinetically throws Metalhead from the building, then Vulcann tells Rosa that while Joaquim is meant to lead the next generation of mutants, he needs nurturing Vulcann can't provide, and offers Rosa the opportunity to join them. Elsewhere, Xi'an discovers the ruins of the Xavier Shelter and encounters Cerebra & Nostromo, the only apparent survivors of a confrontation with Exodus. The three try to leave the city, but are caught under some collapsing rubble. Meanwhile, Metalhead returns to his apartment to find Rosa missing, and when Joaquim destroys a building, the X-Men attack him and Vulcann, leading Vulcann to seemingly kill Fitz.