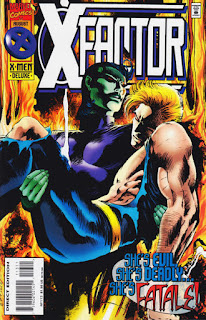 In a Nutshell
X-Factor battles Fatale for Havok.

Plot
At a Tokyo nightclub, a three-way fight breaks out between Fatale, Scarlett, and X-Factor over Havok, a fight which draws the attention of Yukio. After Fatale starts a fire and uses it as cover to escape, she takes Havok to the hold of an Italian frigate which she plans to use to smuggle him out of Japan. She leaves him there restrained in metallic coils designed to nullify his powers, at which point Yukio, having tracked Fatale to the ship, enters. As Mystique & Polaris interrogate Tatsu'o for information about Fatale, Wild Child & Forge track Havok to the docks. Inside the ship, Yukio frees Havok just as Fatale arrives, and his ensuing burst of energy disrupts their fight and destroys the ship. X-Factor finds him amidst the wreckage, and though Yukio also emerges unscathed, Fatale is nowhere to be found. The immediate threat over, Havok despondently dons his energy-containing body suit, while at the airport, Scarlett meets with her mysterious boss and promises him she'll deliver Havok to him.

Firsts and Other Notables
Yukio, ally of the X-Men and staple of X-Men stories set in Japan, pops up in this issue. 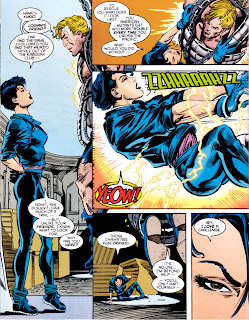 At the close of the issue, Havok returns to wearing his original black containment suit (that he first received from Larry Trask back in the Silver Age), to help control his fluctuating power. He will continue to wear it - and struggle with his power - over the next few issues. 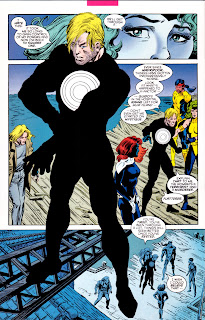 He also mentions that Strong Guy is in the hospital, suggesting he’s at least alive, the closest thing we’ve gotten to a resolution to his cliffhanger heart attack.

The issue concludes with Scarlett meeting her boss in a limo; he's implied here (and earlier in the issue) to be Sugar Man (I guess he left Genosha to ride in a limo?), while Fatale's boss is hinted at being Dark Beast (he is referred to as "the doctor"). Scarlett promises Sugar Man Havok is already hers and that she'll deliver him. Spoiler alert, she won't; this is her last appearance to date. 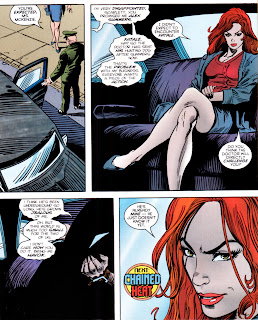 A Work in Progress
Fatale says her mission is only to keep Havok out of Genosha, not to kill him. 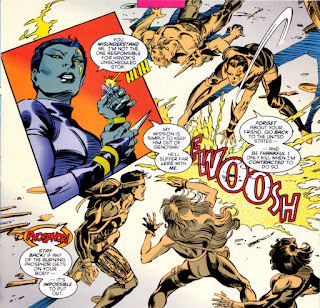 It’s implied that Scarlet was resurrected or created by Sugar Man (Fatale references her “Saccharine Creator”). 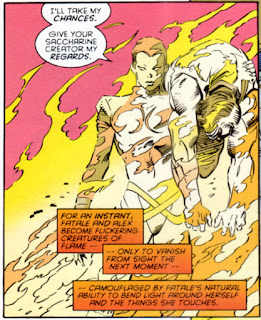 Fatale’s ability to disappear into the background is also referenced.

Wild Child says returning to Alpha Flight is no longer an option for him. 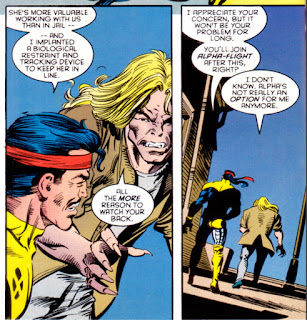 Yukio references her last appearance, when she fought the Phalanx alongside Storm & Gambit in Uncanny 312-313. 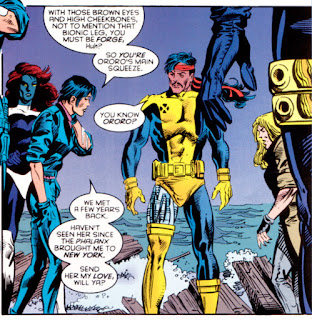 Austin's Analysis
Well, there's some X-characters in Japan, so that means Yukio has to show up (especially since X-Factor already fought elements of the Yakuza, that other staple of Japan-set stories, in the previous issue...). To Yukio's credit, she's pretty much the only character in this issue to have her act together, managing to track down Havok, free him, and fight off Fatale while the rest of X-Factor more or less flails about. And with that, X-Factor's brief Japan sojourn comes to a close, with very little in the way of explanation of why either Scarlet or Fatale was after him, beyond their vague allegiances to vaguely-defined masters. Which pretty much means this whole little two-part story was just an excuse to establish Havok's powers as being out of control and put him back in his classic black costume, which, is all well and good, but it seems like this was time (and pages) that could have been better spent. Like, for example, resolving the series' pre-"Age of Apocalypse" cliffhanger and addressing Strong Guy's fate directly.