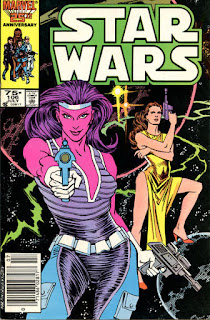 In a Nutshell
Luke leads the Hiromi on a rescue mission aboard the Tof flagship.

Plot
The Hiromi's celebration of their victory over the Tof on Zeltron is cut short when Luke tells them he's going to lead them in an assault on the Tof flagship to rescue Leia's Zeltron attaches. Meanwhile, the attaches attempt to escape from their Tof cell, but their captors fail to fall for their ruse. Back on Zeltron, Leia & Dani follow the captive Den, hoping to locate their missing companions, while the Hiromi manage to extract intelligence & security codes from a captive Tof. When the rest of the Tof faction seemingly frees the Zeltrons & Alliance representatives from the Nagai, Han greets them warmly, only to be turned on by the Tof, who attack the collective group. But the timely intervention of Leia & Dani gives them an opening, and working with the Nagai, Han, Lando, and the rest of the Alliance forces manage to overpower their would-be captors. In the wake of their victory, Den proposes a new alliance to Leia. In space, Luke, the Hoojibs and the Hiromi board the Tof ship. As Luke attacks the Tof, the Hoojibs take out all the ship's systems except life support and the Hiromi free the Zeltrons. Luke then joins them, having set explosive charges to destroy the ship, and the Hiromi celebrate their victory.

Firsts and Other Notables
Continuing the "Den has feelings for Dani" subplot, Den executes one of the Nagai to save Dani, then essentially surrenders himself to the Alliance, then proposes a new alliance. 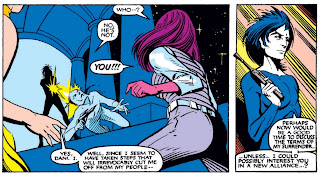 This issue features another doozy of a title.

A Work in Progress
There’s a funny bit where the Zeltron attaches remark on how often they’ve been captured since being assigned to Leia. 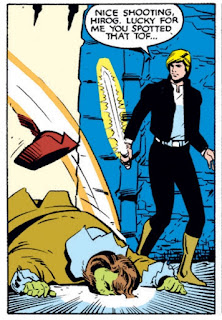 Austin's Analysis
Another fairly action-packed issue, this one once again struggles a bit under the weight of its contradictions. On the one hand, Duffy is presenting the Tofs as a serious threat: blunt, physical & violent to an extent that even the Nagai fear them. On the other hand, she is also attempting to present the Hiromi, a race whose defining characteristic is a puffed up sense of importance that lies in contrast with their cowardly nature, as a legitimate threat to the vicious Tof. As with similar contradictions last issue, it almost doesn't work, but stays just shy of pushing things too far.

It helps that the Hiromi have Luke (and to some extent, the Hoojibs) leading the charge, and that is another another example of Duffy handling Luke really well. There's something very Jedi in Luke's interactions with the Hiromi over the last few issues, the way he allows himself to be captured and doesn't resort to violence until the Tofs force him to, in defense of himself and his would-be captors, and in the way he then turns the ostensibly antagonistic Hiromi into allies, not by conquering or defeating them, but by using their own puffed up sense of pride to build up their confidence in order to achieve actual martial goals. It all goes largely unstated, but it does a lot to show how the Jedi can accomplish things in ways that go beyond being super-powered warriors with laser swords.

Next Issue
All good things come to an end.