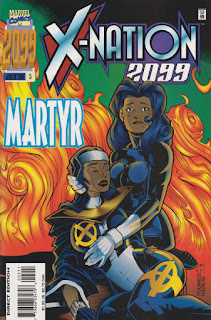 In a Nutshell
X-Nation deals with the loss of the Sisterhood of the Howling Commandments & the Xavier Shelter.

Plot
Sifting through the ruins of the Xavier Shelter, X-Nation finds the grievously-wounded Sister Nicholas. Twilight tries to use her power to save her, but she is unable to do so. As she dies, Sister Nicholas urges the kids to make something out of their lives. Later, they mourn the loss of the Sisters and try to figure out what to do next while drinking at the Negative Zone milk bar. Suddenly, Nostromo's powers flair out of control, attracting the attention of the Wild Boys. They attack X-Nation and, stronger than before, they manage to overpower everyone but Metalsmith. As they turn their attention to him, Nostromo manages to escape. He finds Cerebra, who had been searching Halo City for X-Nation, but his powers continue to flair out of control. Just then, Cerebra loses her sense of X-Nation's energy signatures, which she says can only mean they're dead. Outside the milk bar, Exodus stands triumphant over the fallen forms of both the Wild Boys and X-Nation.