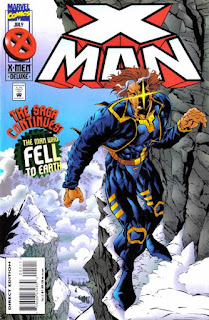 In a Nutshell
Age of Apocalypse refugee Nate lands in Switzerland & takes a last name.

Plot
Nate lands disoriented in the Swiss Alps. Dazed and unsure where he is, he stumbles across a highway and is picked up by a truck driver. But when Nate becomes suspicious, his powers flare out of control, destroying the truck and leading Nate to stumble into the nearby town on Montreux. Meanwhile, Bishop & Professor X are discussing Bishop's strange dreams when Xavier psychically detects Nate's presence, followed immediately by that presence becoming cloaked, something that's never happened to Xavier before. In Montreux, Nate confronts a man he thinks is Forge, but is actually a resident of Montreux named Sven. Seeing that Nate is in need of help, Sven brings him to his home. When asked his name, Nate adopts the surname "Grey", thinking of his mother. He then falls asleep on the couch while Sven goes for food. Nate wakes up later to discover he's not alone: he has been joined by a red-haired woman who says her name is Madelyne Pryor.

Firsts and Other Notables
With this issue, X-Man becomes the one "Age of Apocalypse" alternate series to remain in publication following the end of the event, becoming the ninth monthly X-book and the second to star, functionally, Cable. Thanks to the financial inertia of the X-books in the mid 90s, this series will (inexplicably at times) last 75 issues, with the title character sticking around and appearing to varying degrees even after the book is cancelled, most notably serving as the driving force behind the AoA-inspired "Age of X-Man" event.

Speaking of, Cable's pre-AoA creative team sticks with this book as Steve Skroce ends his brief run on Cable.

This issue concludes with the return of Madelyne Pryor, last seen in Uncanny X-Men #243, her memories having been transferred to Jean Grey just prior to her death. This version of Madelyne will turn out to be a "psionic construct" created by Nate, who will go on to join the Hellfire Club, regain her memories and enter into an ill-advised relationship with Nate (who is, genetically, her son), before ultimately being killed off again (though the character will later return after her X-Man stint via various means). 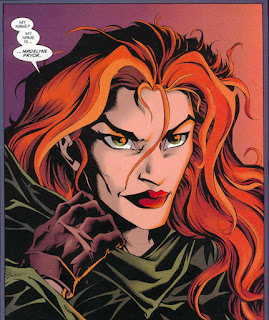 Nate adopts the surname “Grey” after being reminded of Jean in this issue (he had previously just been “Nate”); his thoughts of Jean will also play a role in Madeline’s return.

A Work in Progress
Bishop, continuing the long-standing X-tradition of discussing his problems over yardwork, discusses his flashes of Age Of Apocalypse memories with Xavier, who once again senses Nate’s presence. 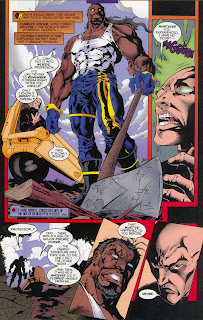 Nate is able to telepathically teach himself another language. 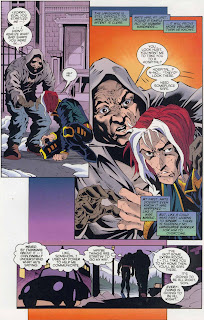 It's in the Mail
A note on the letters page says that editorial received numerous letters asking for the character to stick around which seems...dubious.

Austin's Analysis
As will become apparent over time, one of the problems with X-Man as a series is just how passive a character Nate Grey is, one who has things happen to him rather than driving the story himself, and this first issue of the series set in the prime reality showcases that passivity right out of the gate. Back in "Age of Apocalypse", X-Man was one of the better series, featuring a more cllasical Hero's Journey arc for the title character set against the backdrop of a nihilistic, non-traditional narrative in which the villain has already won. That juxtaposition imbued the series with tremendous energy, and helped propel Nate along familiar & comfortable beats: discovering his powers, yearning to strike out on his own, losing a mentor & learning the price attached to his powers, accepting his destiny by confronting the villain. Here, Nate is entirely reactive, doing little more than dazedly wandering through a vaguely-Swiss town before waking up to the image of his genetic mother's clone. Everything he does in the story he does instinctively or reactively, without any real agency or purpose.

Granted, the depiction of Nate's responses to finding himself in a whole new reality without explanation isn't unrealistic; it makes sense that he'd be disoriented and unsure what to do. But being realistic & understandable doesn't make it entertaining or enjoyable, and by isolating Nate from any other known characters, it prevents someone else from carrying the load of being proactive (or entertaining) while the title character responds realistically to his surroundings. By dropping Nate into an Apocalypse-free world and immediately into a fish-out-of-water story, it essentially robs the character of what made him entertaining in the first place and what - theoretically - led to audiences demanding he stick around after "Age of Apocalypse" ended. Unfortunately, "presenting the character is the least entertaining way possible" is very much a harbinger of things to come for this series.