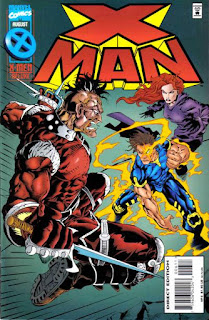 Plot
In Genosha, Sugar Man tasks his agent Rex to capture Nate Grey on his behalf. Hours later, in Switzerland, Nate & Madelyne try to get to know one another, a task made difficult by Nate not knowing where he is and Madelyne not knowing who she is. In town, Sven, owner of the house where Nate is staying, is getting drunk and is approached by Rex. Elsewhere, Blaquesmith tries to track Nate's psionic signature. Back in Switzerland, Nate offers to read Madelyne's mind, and when he does so, a massive, monstrous image of Havok appears; the strain knocks out Nate. In town, Rex detects the surge of energy and, no longer needing him, kills Sven on his way to find the source. He arrives at the chalet and attempts to capture a barely-conscious Nate, but Nate uses the last vestiges of his mental power to blast Rex out of the house, knocking him out and allowing Nate & Madelyne to escape. Later, Rex wakes up and contacts Sugar Man, promising him everything is under control.

Firsts and Other Notables
This is the first appearance of Rex, a mercenary/bounty hunter type in service to Sugar Man, who is tasked with capturing Nate on Sugar Man's behalf. He is apparently meant to be the prime version of the human Rex who served as Apocalypse's aid/toady in "Age of Apocalypse". He'll stick around for the duration of this book's first post-AoA storyline, and then mostly disappear. 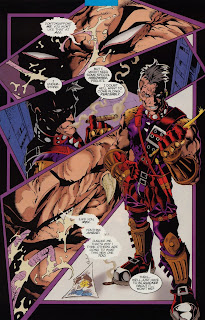 Sugar Man is shown operarting out of a massive lair (presumably in Genosha) attended to by servants/allies of some kind (including Rex), despite his appearances in X-Men Prime and Excalibur #87 showing him working alone in shadowy chambers. 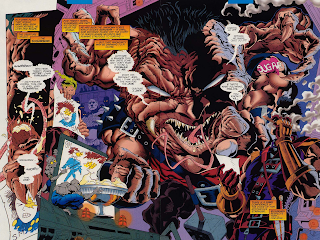 Blaquesmith pops up briefly, referencing the attack on his facility in Cable #21, attempting to pinpoint Nate's location. 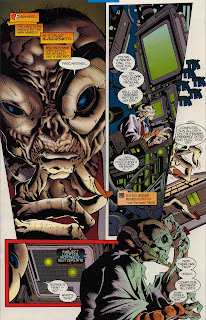 A Work in Progress
Madelyne freaks out when she hears the name Sinister. 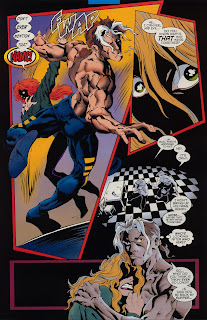 Later, when Nate reads her mind, she manifests a massive, monstrous image of Havok. 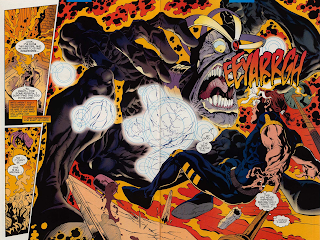 Austin's Analysis
What's worse than one passive character who is unable to drive the action of story? That's right, two passive characters! Which is what is presented here, as roughly three quarters of the issue is spent on Nate & Madelyne discussing their respective lack of information about themselves, their pasts, or how they both ended up in some random Swiss chalet. It's riveting stuff. Granted, the other 25% of the story involves a fight between Rex and Nate, and Steve Skroce does his best to punch up some pretty dry material, but considering Rex is, at best, a one-note flunky of the one-note Sugar Man, and that Nate, even when using his powers to defend himself, does so in the most passive, bland way possible (ie he instinctively just blasts things), that's not much of a saving grace. It's not clear what the readers who demanded Nate survive the "Age of Apocalypse" wanted from his ongoing series, but it seems doubtful it's the weird pseudo-gothic romance involving two characters who have no idea who they are (but are known to the readers to be effectively if not technically related) that is this issue.