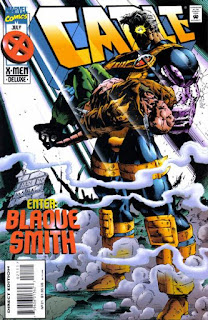 In a Nutshell
X-Force prepares for their move to the X-Mansion, then Cable receives a warning from Blaquesmith.

Plot
Cable and X-Force explore the wreckage of their Murderworld base, salvaging anything of value. With the help of Jean Grey & Caliban, they manage to free their Pacrat ship from the rubble, and use it to ferry the team to the X-Mansion. Once they arrive, Cable receives a telepathic call for help, and quickly sets out in response, bringing alone Domino & Caliban. They arrive at a rusted freighter in Baltimore and, after disabling some booby traps, discover Cable's ally Blaquesmith, who has been working out of the ship. He tells Cable someone attacked him and stole all his date on Cable, triggering Blaquesmith's call for help. Blaquesmith promises Cable he'll continue to search for the identity of the attacker and keep him informed, and Cable asks Blaquesmith to create new uniforms for X-Force. As Cable leaves, Blaquesmith warns him that whomever realized he could get at Cable through Blaquesmith is both smart & deadly. Meanwhile, on Muir Island, Moira tells Rory Campbell that she believes someone on Muir leaked the information about the Legacy Virus, and while that news has already broke, the data pertaining to Cable, in the wrong hands, could mean his life is in danger.

Firsts and Other Notables
This issue introduces Cable's heretofore unmentioned friend/mentor Blaquesmith (who first appeared in X-Men Prime) to the series. While we've never met him before, Blaquesmith and Domino are acquainted with one another, and Blaquesmith is familiar with Cable's "X-Force" project. 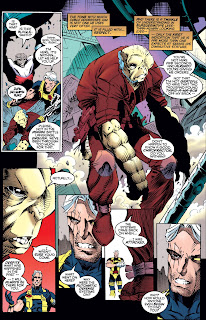 Cable & Blaquesmith are keeping some kind of secret from Domino, though I have no idea what it turns out to be. 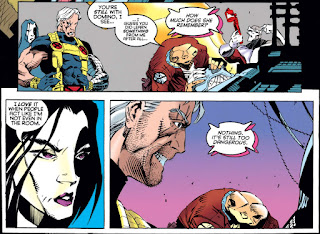 Cable & Blaquesmith briefly speak the Askani language, the first reference to a language specific to their future collective.

Blaquesmith is attacked by someone who searches his files for data on Cable; the hazy image of the culprit isn't identifiable to Cable or Blaquesmith, but it strongly resembles X-Cutioner (if this is going anywhere significant, I don't recall it). 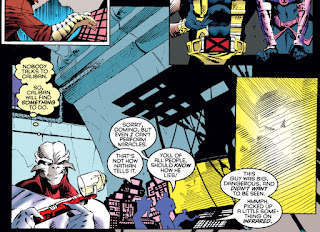 Similarly, the issue ends with Moira & Rory worrying that whomever leaked the info about the Legacy Virus to the media may be a threat to Cable, which is, I believe, another brick in the "Cable is important to curing the Legacy Virus" road that goes nowhere. 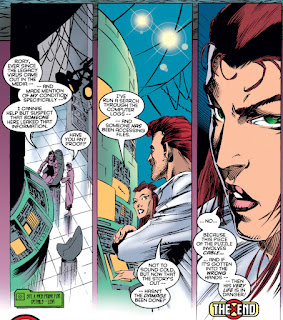 This issue takes place before X-Force #44. As such, Warpath’s new haircut (and obsession with finding the already-absent Siryn) debut here (which doesn’t quite work considering Siryn was on hand at the X-Mansion in Uncanny #322, after X-Force moved there. 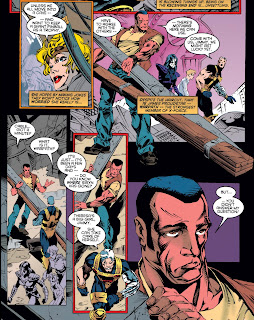 A Work in Progress
X-Force digs out their Pacrat flying vehicle from the Murderworld rubble in this issue. 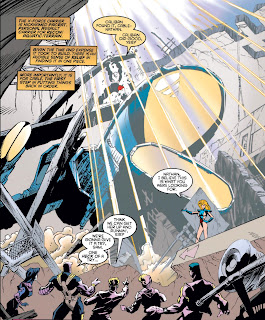 Blaquesmith turns out to be the source of X-Force's new costumes.

Austin's Analysis
As with so many of these immediate post-"Age of Apocalypse" issues, this is mostly about setting up future stories. Curiously, one of those stories, receiving essentially half this issue's pages to set it up, is the new X-Force status quo, which further underscores just how much Jeph Loeb is carving out his own little corner of the X-universe, with this issue leading directly into his introductory X-Force issue. Beyond that, the big focus here is properly introducing Blaquesmith following his brief first appearance in X-Men Prime. While most of the stories his cryptic comments set up ultimately fizzle out, he will become a stalwart part of the series' relatively limited supporting cast moving forward, well outlasting Loeb himself. But for the here and now, Blaquesmith's (proper, if not technical) introduction (and exploring the details of X-Force's Murderworld-to-X-Mansion move a little more) aside, very little of what happens in this issue is terribly engaging.

Next Issue
Next week: Gene Nation attacks in Uncanny X-Men #323, Fatale strikes in X-Factor #113, and Nate Grey meets his mother (sort of) in X-Man #6!