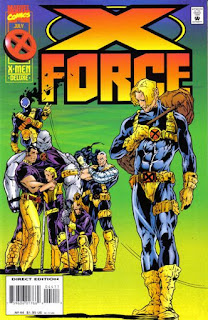 In a Nutshell
Cable announces a new look & focus for the team as Cannonball graduates to the X-Men.

Plot
X-Force gathers outside Professor Xavier's office, where Cable and the professor are discussing the fate of the team, until Domino comes in and shoos them out, telling them to find something else to do. Outside, the team tells Sunspot there's no updates, then goes their separate ways, with Rictor leaving to call home, Boomer & Shatterstar heading to the Danger Room, and Warpath contacting Banshee, looking for news on the absent Siryn. When Boomer & Shatterstar get to the Danger Room, they discover it's been turned into a habitat for the now-docile Sabretooth. Meanwhile, Cannonball runs into Cyclops, and discusses his feelings about being back in the mansion after so long away. Just then, Cable telepathically calls the team to Xavier's office, where he announces that X-Force will now operate out of the mansion, with a unified look and a focus on boosting their powers, including an increased use of Cable's telepathy. Xavier then announces that Cannonball is graduating to join the X-Men, while Domino enters with Caliban, who will be joining the team in his place. Unnerved by the prospect of Cable being in his head, Rictor decides to return home for a visit, over Shatterstar's objections, while Boomer & Cannonball vow to maintain their relationship in the face of all the changes. Elsewhere, a bound & gagged Siryn is delivered to the Weisman Institute for the Criminally Insane.

Firsts and Other Notables
Jeph Loeb, already the regular writer on Cable, comes aboard as the new series writer with this issue, taking over from the departing Fabian Nicieza. Along with X-Man, this puts Loeb in control of roughly a third of the entire line of regular X-books for the time being (he will only remain on X-Man for a few more months, so his dominance is short-lived). He will remain the series writer through issue #61.

Adam Pollina also joins the series this issue, as the book's new regular artist, and he will stick around through issue #81 (though as is the custom at this time, he'll be spelled on the book via various fill-in/guest artists pretty regularly). Also, it's worth checking out the first line of his Wikipedia page, which I won't repeat here because I already get enough weird spambot comments as is.

With the new creative team comes a new direction for the book, with the team moving back into the X-Mansion (following the destruction of their previous Murderworld base in X-Men Prime) and adopting a new dedication to furthering their powers (with Cable specifically citing a desire to use his telepathic abilities more). 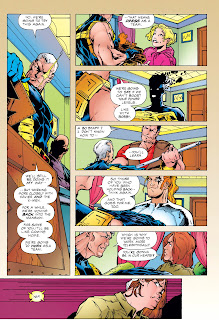 Along with the new status quo comes new, more uniformed costumes for the team, replacing the previous Capullo-designed ones. 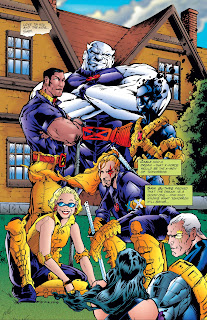 The roster also gets a shakeup, most notably via the departure of Cannonball, who "graduates" to the X-Men this issue, leaving behind the team he effectively led for a good chunk of its existence. With X-Force living alongside the X-Men, he will continue to make periodic appearances in this series, but won't be featured regularly again until issue #83. 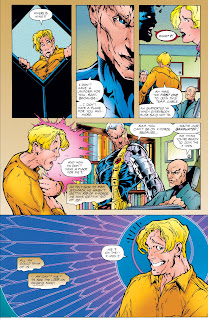 Rictor also leaves this issue, uneasy with the idea of working with Cable telepathically (which, on the one hand, ties in nicely with Rictor's longstanding issues with Cable, going all the way back to when Cable joined the New Mutants, but on the other hand, Rictor had mostly moved past those issues, helped in large part by learning it was Stryfe and not Cable who murdered his father). His departure here is presented as a short term thing (he's going home to visit his family), but he won't be back until issue #59. 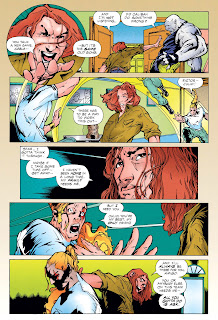 Caliban, whom Loeb had featured regularly for a few months over in Cable, joins the team this issue; he will outlast Loeb and remain in the book through issue #80 (and will rejoin the team later during "Messiah Complex"). 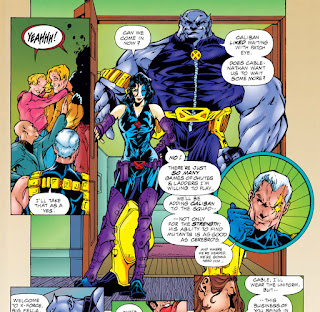 Sabretooth is revealed to have regained consciousness this issue (he was last said to still be in a coma in X-Men #42) and been rendered docile/childlike as a result of Wolverine's attack, leading him to live an idyllic existence in the Danger Room. He will become something of a fixture in this series over the next few months, as Boomer strikes up a friendship with him despite warnings that he may well be faking his docility (ultimately, it'll be revealed that he is faking it, but only after his healing factor fully restores his personality and he decides to pretend to still be docile for a time; at this point, his lack of savagery is genuine). 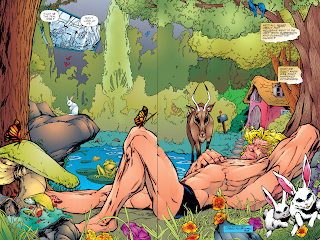 Siryn is notably absent for most of this issue (with Warpath spending most of it trying to figure out where she is), until she pops up at the very end being admitted to the Weisman Institute. This is the beginning of a plotline that will find Siryn going undercover at the institute and running into Deadpool again before it adds a bunch of unnecessary complications to Shatterstar's backstory. 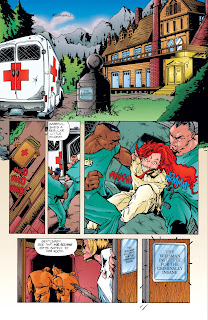 The cover of this issue is an homage to New Mutants #99 (when Sunspot left the team), which of course was an homage to X-Men #138. The series also gets a new logo with this issue's cover.

A Work in Progress
The narrative captions in this issue are presented in the form of a letter Sam has written to his mother (and Loeb really leans into the whole "right an accent phoentically" thing, with Sam, for example, writing "nevah" instead of "never" repeatedly, something I'm fairly certain no human being has done, ever).

Sunspot’s time as Reignfire is handwaved away pretty aggressively. 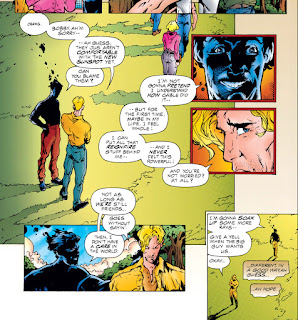 Also, his ability to fly is highlighted as a new ability, though he technically flew in issue #28 (but since he immediately disappeared after that and only recently rejoined the team, it makes sense for the group to still be adjusting to it here). 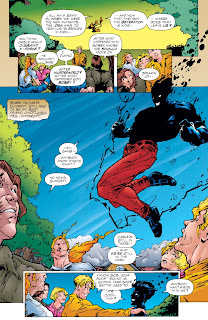 In addition to the new costume, Warpath has a new look with shorter hair and is given a bo staff to train with, part of the whole "expand their powers" remit.

Young Love
Sam & Boomer agree to try to make their relationship work despite now being on separate teams. 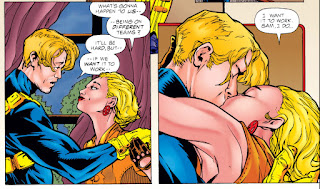 Austin's Analysis
X-Force is, at its heart, two different series (at least for the majority of this first volume): one takes the mission statement of the X-Men (sworn to protect a world that fears and hates them) and adds a 90s sheen of "shoot first, ask questions later" EXTREME!-ness to it. The other chronicles the further adventures of the now-somewhat-grown-up third generation of Xaviers' students, the former New Mutants. When Liefeld was directing things early in its run, the book steered more towards the former. When Nicieza gained a greater control over the direction of the series, he split the difference between the two, (arguably) better than at any point then or since, crafting a more aggressive, proactive mutant team while also honoring the past of the characters and advancing their stories. Jeph Loeb, beginning with this issue, will lean more towards the latter, bringing the characters back to the X-Mansion and, effectively, turning them into a satellite team of X-Men. The "faster, more proactive" angle won't be gone entirely, but the line between X-Force & the X-Men, beyond the specific team rosters, will blur like never before during his run.

Whether Loeb's efforts will be effective (or entertaining) remains to be seen at this point, but he deserves credit for taking the time to set up the new direction & focus of the series. For as much as he (frustratingly) handwaves away the Sunspot/Reignfire stuff, and especially given how much the entire line seems to really be into in media res returns from "Age of Apocalypse", it would have been easy for him to just drop readers into this new status quo, with Cannonball gone, Caliban part of the team, etc. (see, for example, the way X-Factor handled similar roster changes in its first post-AoA issue). Instead, he dedicates an issue to reconstructing the roster, establishing the new status quo and the in-universe reasons behind and, most importantly, the characters' reactions to it, from Rictor being unsettled by the promise of more Cable telepathy to Sam & Boomer vowing to keep their relationship going to everyone's unease with the returned Sunspot. Whatever may come of this direction, at least Loeb has taken the time to set it up and ease both the characters and the readers into it before beginning in earnest.

Next Issue
Tomorrow, Wolverine struggles with his animal side in Wolverine #91. Next week, Generation X #5 and Excalibur #87.