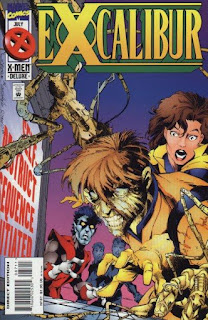 In a Nutshell
Excalibur explores the secrets of Genosha.

Plot
Kitty thinks back on Excalibur's crash landing on Genosha, then travels with Black Air agent Pete Wisdom, Meggan & Douglock to investigate the Genegineer's old lab. Along the way, she & Peter discuss the events which occurred shortly after their crash, in which Excalibur was caught in a three-way fight between some Mutate refugees, Magistrates, and Mutate freedom fighters. On Muir Island, Moira & Rory try to figure out how the information about the Legacy Virus was leaked, while back on Genosha, Britanic meets with Governor Ransom, who tells him the special bullets being used by the magistrates were created in part by his father. Later, Excalibur, along with Ransom & Philip Moreau, gather outside the Genegineer's original lab. After Kitty & Douglock disable the lab's defense, the team learns that the Genegineer received the original mutate process from an unnamed third party. At this point, a watching Sugar Man decides they've gotten too close to learning about his involvement, and triggers the lab's booby traps from afar, sending the truth about Genosha - and the bullets - up in smoke, much to Excalibur's dismay. Still, the watching Black Air agents are pleased: Excalibur achieved what they wanted, stirring up Genoshan secrets to Black Air's advantage.

Firsts and Other Notables
After being teased in X-Men Prime, this issue reveals that Sugar Man is responsible for the process which creates the Genoshan Mutates (thereby robbing them of their free will and hair), having given it to the original Genegineer, thereby retconning the origins of Genosha's slave population (in which it was previously believed the Genegineer came up with the process on his own). 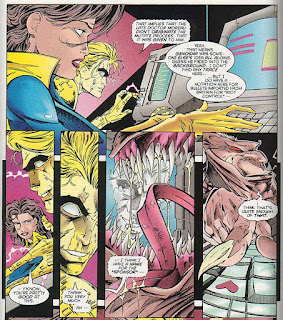 It's a weird retcon, in that it doesn't really lead to much of anything, and it's a bad retcon, in that it takes something away from the metaphor at the heart of Genosha (or, at the very least, unnecessarily complicates it). As ill-advised as the "Dark Beast creates the Morlocks" retcon may be, it at least tries to add to the narrative by offering up an explanation for "Mutant Massacre" beyond "because Mr. Sinister is evil".

This is the last full issue of the series drawn by Ken Lashley (he will contribute to issues #88 and #90, but share the load with other artists). Also, to his credit, he is one of only two series artists to draw the "return" issues of their series following "Age of Apocalypse" (Chris Bachalo, who, unlike Lashley, also drew all four of his AoA issues, is the only other one).

Jenny Ransom, former would-be Mutate and Genoshan ex-patriot (and girlfriend of Philip Moreau, the Genegineer's son), is shown to be Genosha's provisional Governor. 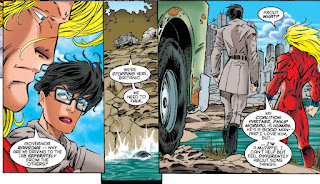 This issue reveals that Britanic’s father played a roles in the creation of the bullets Excalibur was sent to investigate.

Unlike all the other X-books, this one actually shows the immediate resolution of its reality-ending cliffhanger from the previous issue (albeit via flashback, technically). 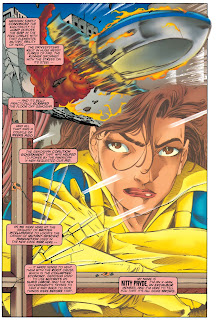 A Work in Progress
Douglock is acting more Warlock-esque, peppering his actions with pop culture references. 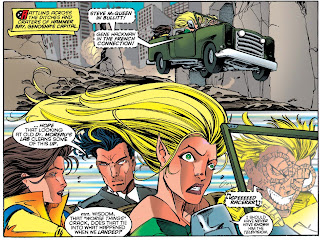 Britanic’s flashforwards are said to be narrowing (ie Ellis is getting rid of them).

The two Black Air agents who sent Excalibur on their mission to Genosha pop up at the end, satisfied that Excalibur has basically achieved their (unstated) goals of stirring shit up.

Artistic Achievements
Liefeld (rightly) gets a lot of flak for his inability/lack of desire to draw feet, but man, Lashley does not seem to understand how fingers work. 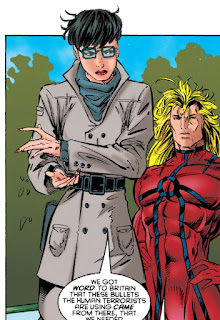 The Grim 'n' Gritty 90s
Pete Wisdom’s “hot knives” power, one of the 90s-est powers of all time, is shown in action for the first time. 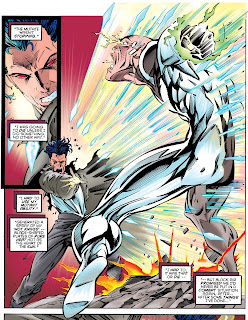 The bullets Excalibur was sent to investigate, which are said to cause extra pain akin to being bitten, have little faces on them like they were taken out of Who Framed Roger Rabbit?. 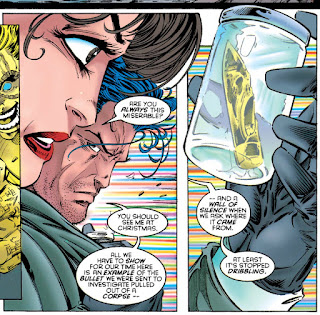 Moira is being inundated with faxes in the wake of the news that she has the Legacy Virus. 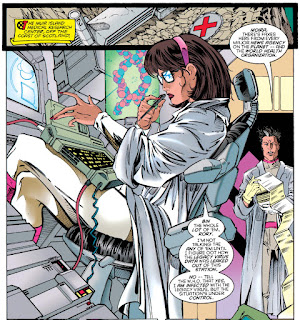 Austin's Analysis
And with that, Excalibur's brief Genoshan sojourn comes to an end, and, cryptic Black Air agent comments aside, it's hard to see what the point of all this was. Of course, ultimately, this issue serves to introduce Sugar Man into the prime reality and reveal the big retcon that he supplied the original Genegineer with the details of the mutate bonding process (for...reasons). But it's hard to imagine that's what Ellis had in mind when he sent the team to Genosha one issue (/five months) ago, unless he was asked to do so by editorial specifically to set up this issue (at the risk of giving Ellis' too much credit, it seems hard to believe he came up with the idea of the Sugar Man retcon himself, particularly since Sugar Man wasn't one of the characters Ellis wrote in X-Calibre). Certainly, to the Black Air agents' point, there are a bunch of narrative seeds planted here: Britanic's dad's involvement in Genosha, the Sugar Man retcon, Wisdom's angst (to say nothing of the larger Legacy Virus storyline). But while Ellis will quickly latch onto Wisdom, most of the larger subplots setu p here involving Genosha will (curiously enough) get handed off to Cable in the near future (thereby furthering the feeling that Ellis is doing all this in the first place by editorial fiat). The end result is an issue that is perfectly fine for what it is, but struggles to justify the presence of its title characters, which is rarely a good thing.