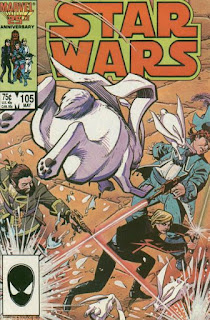 Plot
Luke & Pliff continue to be amused captives of the Hiromi, until the Tof burst into the room where they're being held. Meanwhile, Han & Lando bristle at having been captured by the Nagai, who contact Den to report their success. Den tells them to proceed to the rendezvous point, but Den, as well as Leia & Dani, have also been captured by the Tof. When the Tof enter with Leia's captured Zeltron attaches, the foursome fight back, but are ultimately recaptured. To stave off their execution, Leia plays up their importance to the war effort against the Nagai, prompting the Tof to order them taken to their ship for further interrogation. The Tof leader then orders Den to reveal where he's meant to meet the rest of the Nagai, but Den refuses, until the Tof threaten Dani with torture & death. After Den & the Tof leader leave, the Hoojibs run in, pretending to be dumb animals while they drain the Tof weapons of their energy charge. Meanwhile, Luke uses the Force to escape his bonds, rescue the Hiromi, and overpower the Tof, though their fight spills into the chamber where Leia & Dani are being held. Their weapons useless, the Tof are defeated. Leia intends to rescue the rest of her friends, as well as the Nagai, from the remaining Tof, while Luke says he'll rescue her attaches, telling the Hiromi they'll be helping him storm the Tof command ship, much to their dismay.

Firsts and Other Notables
The Tof make their first full appearance in this issue (after having been teased in the previous two). They basically look like big green extras from a Patrick O'Brian novel. 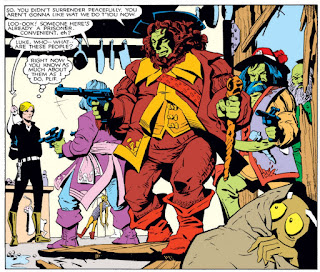 Regarding the upcoming cancellation of the series, the Statement of Ownership in this issue lists the average number of issues sold in the preceding 12 months at around 142,000 copies. Which, for Marvel in the mid 80s, isn't quite cancellation numbers, but is pretty close, especially considering what the series used to pull in (and considering that Marvel had to pay out on the backend for the license).

A Work in Progress
Luke uses the Hiromi’s ignorance as an excuse to provide some explanation on both his and the Hoojib’s abilities.

Plif provides some additional stats on the Tof, including the fact that they are extra galactic, just like the Nagai.

The Tof’s weapon of choice is the club. 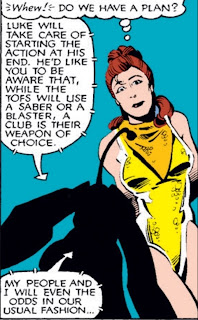 The captured Den Siva agrees to cooperate with the Tof only when they threaten Dani.

Dani is willing to leave Den to his fate, until Leia points out that’ll also risk the lives of the rest of the Nagai captives. 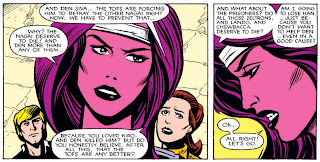 Austin's Analysis
The Tof-Nagai War kicks into another gear with this issue, as the Tof fully enter the scene and immediately set about upending the dynamic between the Alliance forces and the Nagai. While the sheer number of happenings occasionally risk veering into the absurd (what with three separate invasion forces descending on Zeltron at the same time the Alliance is on the planet trying to broker a mutual partnership, with each group being captured or capturing other factions throughout the issue), for the most part, Duffy manages to keep all the various balls in the air, leaning in to the inherent absurdity in order to create different layers of peril for the characters and different obstacles to be overcome: Han, Lando & Chewie are captives of the Nagai, who don't realize their own commander is a captive of the Tof, while Luke, technically a captive of the Hiromi, helps them fight back against the Tof and free Leia & Dani in the process, all while the telepathic "bunnies" run around absorbing the energy from all the Tof weapons. It's a cacophony of action & reversals that works to Cynthia Martin's strengths, and while all the bright colors and chaotic happenings may somewhat hamper the dramatic effect (it's hard to get too concerned about any given character's fate with so many of their circumstances changing from one page to the next), it's still largely entertaining in a "more is more" kind of way.