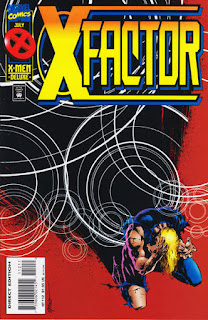 In a Nutshell
Mystique & Wild Child join X-Factor on the hunt for an out-of-control Havok.

Plot
In Tokyo, a confused Havok emerges from a crashed jet plane. A few hours later, the rest of X-Factor, including Mystique and Wild Child, are attacked by the Cyburai, sent to delay X-Factor as a favor to a mysterious individual. Meanwhile, an assassin arrives in Tokyo, while a dazed Havok encounters Scarlett, whom he realizes kidnapped him. She tells him she was taking him to Genosha for his own good, but he runs away. Elsewhere, Random receives a mysterious phone call, after which he kills Vera, then collapses into a pile of goo. In Tokyo, Tatsu'o, master of the Cyburai, meets with the assassin, Fatale, the person who asked them to delay X-Factor. She intends to take matters into her own hands now. Meanwhile, Polaris & Wild Child manage to track Havok to a nightclub, arriving just after Scarlett. With his power building & growing out of his control, Fatale suddenly appears. Calling herself damage control, she stabs Havok from behind.

Firsts and Other Notables
After co-writing a few issues with Todd Dezago and helming the alternate reality Factor X, this is John Francis Moore's first full issue of X-Factor as the sole series writer. He won't stay on the book long though, leaving with issue #114.

Fatale, a purple-hued assassin, debuts in this issue, targeting Havok. She will turn out to be an agent of the Dark Beast (and the waitress who seemed familiar to Bishop in Uncanny X-Men #299), and pop up with some regularity across the line in the run-up to "Onslaught" before largely disappearing. She is a mutant with the ability to bend light (enabling her to change her appearance & become invisible) and also teleport; she is also an accomplished hand-to-hand combatant & skilled with bladed weapons. 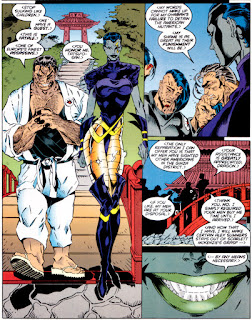 After digging her out of the dustbins of history for Factor X, Moore resurrects the prime reality Scarlett, the red-haired femme fatale who tangled with Havok & Wolverine in the late 80s Meltdown limited series, in this issue. She will stick around through next issue, then return into the obscurity from whence she came (she is intended to be an agent of Sugar Man - she was trying to get Havok to Genosha when he crashed their plane in Tokyo - though why Dark Beast & Sugar Man are competing to acquire Havok - and why they're doing it now, when they've been theoretically hanging around in the background for the last 20 years - is, like so much else from this era, never really made clear). 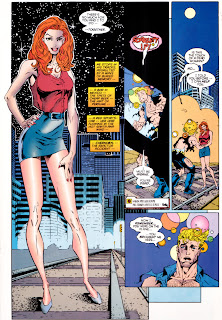 Former Gamma Flight/Alpha Flight member Wild Child turns up in this issue; he is said to be helping X-Factor out as a favor (due to his tracking abilities), following their (unseen) layover at Department H (the occasional headquarters of Alpha Flight) between X-Men Prime and this issue (in which they sought help for Havok's spiraling-out-of-control powers), but he will stick around and eventually join the team. At the time, I always assumed this was due to the popularity of the Sabretooth/Wild Child pairing in Astonishing X-Men (since, even by Alpha Flight standards, Wild Child was kind of a minor character), but in hindsight, there's really no way any kind of fan response to that pairing/Wild Child in particular could have reached Moore in time for him to work him into this issue; more likely, someone (Lobdell, Moore, whomever) decided they wanted to use Wild Child, and then the character was either slotted into "Age of Apocalypse" to set up his role in X-Factor (or was added to X-Factor after it was decided he'd appear in AoA). 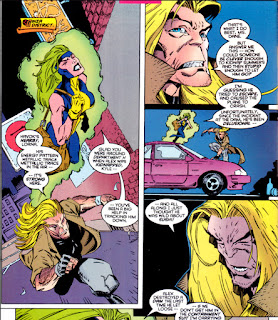 Random receives a strange phone call, after which he kills his girlfriend Vera, then collapses into a pile of goo (not unlike when Haven transported him through dimensions). This marks the beginning of a series of bizarre changes for Random that tie the character in with Dark Beast and deviate him fairly significantly from how he's been presented thus far (including the eventual "he's actually just an insecure teenager playing a tough guy" revelation that really doesn't square with a lot of his earlier appearances), none of which is helped by the changing of writers. 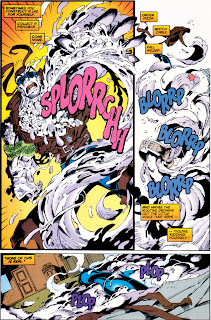 The Cyber Samurai (or Cyburai) who battled the original X-Factor in issue #63-64 (and Iceman again in Uncanny X-Men #289-290) turn up in this issue, battling X-Factor on behalf of Fatale. 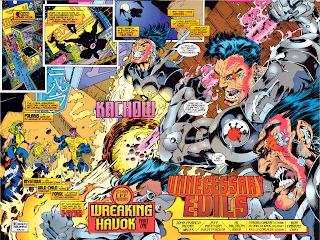 Jeff Matsuda, after drawing the X-Factor portion of X-Men Prime, fills in on this issue. Regular penciler Steve Epting will return with issue #114 (and stick around after Moore leaves).

A Work in Progress
Forge has placed a tracer in Mystique that allows him to track her whenever she shapeshifts.

It's in the Mail
Letters in this issue refer to "Age of Apocalypse" collectively as the "After Xavier" event.

Austin's Analysis
To varying extents, all the X-books return from "Age of Apocalypse" and their reality-ending "Legion Quest" cliffhangers in media res, with each series getting a brief check-in two weeks after those events via X-Men Prime. But even by those standards, this issue kicks off the post-AoA tenure of X-Factor in an abrupt way. The fate of Strong Guy, whose issue-ending heart attack served as the book's pre-AoA cliffhanger, goes unmentioned (not even warranting the hand-wavy line of dialogue that the Sunspot/Reignfire cliffhanger earned in X-Men Prime) ,while the story picks up not from the point of Havok suddenly losing control of his powers & destroying a dam, but after he is rushed to Department H in Canada, is captured by the re-introduced Scarlett from the little-read Meltdown ministeries, subsequently escapes in the skies above Tokyo, causing a plane crash, and Alpha Flight's Wild Child & Mystique are pressed into service with the team, all of which happens off-panel.

The end result, not surprisingly, creates the feeling that at least one issue was missed, with a tremendous amount of narrative & series developments packed into the space between two issues. The desire to shake things up, especially for a new writer fully handed the reigns of a series is understandable, and the book had been drifting away from the Peter David status quo, shedding the characters he brought in and the tone he established, for a while even prior to this. But the feeling of having missed an issue somewhere (despite, you know, not) leaves this new direction stumbling right out of the gate, and it will take some time for the series to right itself - if, indeed, it ever really does.