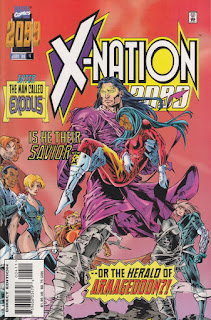 In a Nutshell
Atlantis attacks the Xavier Shelter while X-Nation escapes from Avian.

Plot
Atlantean forces attack the Xavier Shelter, prompting the Sisterhood of the Howling Commandments to fight back in defense. Meanwhile, the captive X-Nation is brought before Avian, and when they can't tell him where Willow is, he sends them to processing, where young mutants are tortured in the hopes of discovering the Mutant Messiah. There, they meet the previously-captured Metalsmith. Back in Halo City, Cerebra fights off Exodus, who believes she will make an excellent acolyte in mutantkind's emancipation, while the Sisterhood takes heavy losses as Attuma enters the fray. In Florida, X-Nation & Metalsmith are freed by a disguised Willow, who then poses as Avian in order to use his ship to fly the entire group home. However, just as they arrive back at the shelter, it explodes.