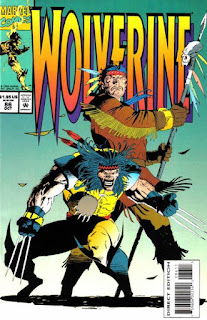 "Claws Along the Mohawk"
October 1994

In a Nutshell
The untold tale of Albert & Elsie-Dee's adventure in the past is told.

Plot
After tracking Wolverine to Muir Island only to find the place destroyed and Wolverine shielded from Albert's sensors, Elsie-Dee proceeds to tell Bloodscream about her and Albert's adventure in the past with the Siksika tribe, where they met an elderly Forge who explained how he and Wolverine traveled back to this time from a point in Albert & Elsie-Dee's future, in pursuit of the Adversary, who has possessed a Siksika shaman. As Wolverine & Forge fight the shaman, Albert runs the Siksika gauntlet, becoming their war chief, but Wolverine & Forge end up getting displaced in time. In the present, Albert is suddenly able to detect Wolverine, and the trio rush off to find him, while in the future, Wolverine emerges from the timestream and meets up with Forge, Albert & Elsie-Dee's head. Forge explains that because Albert & Elsie-Dee traveled into the past to discover the origin of the adamantium skeleton they found, they caused Wolverine to be sent to the future, hence preventing the skeleton from being left in the past. Together, the four continue their fight for freedom.

Firsts and Other Notables
This issue reveals the "untold" tale of Albert & Elsie-Dee's time with the Siksika tribe, when they arrived in the past to resolve the mystery of the adamantium skeleton they found during the "Crunch Conundrum" in issues #51-53. In the past, they encounter an older Wolverine & Forge (despite Elsie-Dee saying in issue #84 that they didn't find Wolverine in the past) from an alternate future, and in doing so, they prevent that Wolverine from dying in the past and leaving the skeleton which prompted their journey into the past. Makes sense, right?

In the present, Albert, Elsie-Dee & Bloodscream arrive on Muir Island after the Phalanx attack in the previous issue, then head off to Tibet after Albert is able to detect Wolverine again. However, this marks the end of their plotline, as Hama never gets around to following up or closing it out. Bloodscream next appears, on his own, in X-Men Unlimited #9, while Albert & Elsie-Dee won't pop up again until Generation X #42 (which is their last appearance to date). 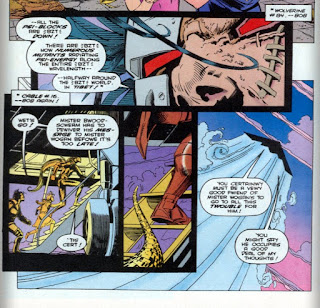 The issue concludes with the older, alternate, Wolverine & Forge, along with Albert & Elsie-Dee (who has been reduced to just her head) battling some kind of cyborg army in a future that, as far as I know, never gets revisited.

The alternate Forge & Wolverine are in the past to battle the Adversary, whom Forge says escaped after being trapped at the end of “Fall of the Mutants” and fled into the past. While this particular Adversary doesn't appear again, the character will return in the near-future, after "Age of Apocalypse".

Though technically from an alternate timeline, it’s worth noting that the older Wolverine has adamantium claws (the "main" Wolverine doesn't appear in this issue). 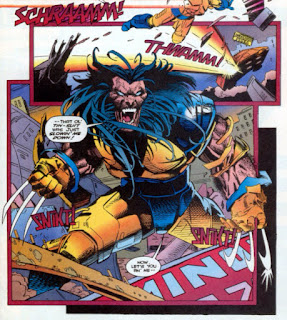 Future Forge believes Wolverine is able to bend the rules of time travel as a result of being affected by a Temporal Paradox Field, which a footnote attributes to the Crunch Conundrum. 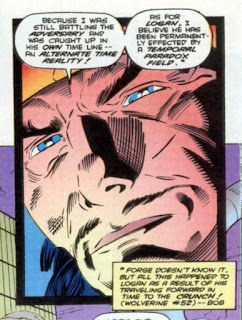 Creator Central
Ron Garney fills in on this issue, which means that Adam Kubert, the book's "regular" artist, has drawn one of the last four issues. Garney will

A Work in Progress
Albert is initially unable to locate Wolverine due to the Phalanx and events in Cable #16. 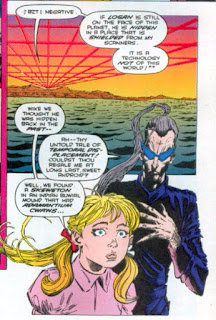 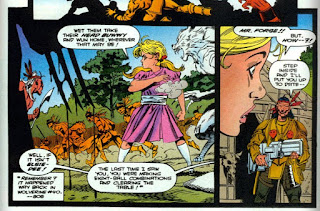 Austin's Analysis
After the one-issue contribution to "Phalanx Covenant" crossover, we're back to fill-ins, though thankfully, this isn't as rough as the two issues preceding the crossover. It seems doubtful anyone was clamoring to discover the lost adventures of Albert and Elsie-Dee with the Siksika tribe, especially since it first teased only a few issues before this, but it can't be denied that this issue does indeed feature that lost adventure, and while the whole time travel business seems needlessly complicated, it does resolve the mystery of the adamantium skeleton from the "Crunch Conundrum" (and it's tough to penalize this issue for the fact that Hama just completely drops the Albert/Elsie-Dee/Bloodscream plotline he's been developing for the last few issues after it). Combine that with art from Ron Garney, which is at least competent and consistent in a way other recent fill-in art was not, and this issue falls more easily into the "inoffensive" category than the "frustratingly bad" one.