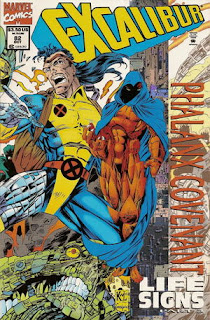 In a Nutshell
Douglock destrous the Babel Spire, and the Phalanx with it.

Plot
After revealing the Babel Spire, Shinar orders Douglock to capture Wolfsbane & Cannonball. He does, but Shinar sees through his intentions and the Phalanx capture Douglock as well, and Shinar orders all three to be made part of the spire. Meanwhile, Shinar takes Forge to the Phalanx nursery, where he compels Forge to regulate the power flow to the eggs so they're not disrupted when the spire activates. Elsehere, Douglock manages to break free, but Cannonball insists the three of them are going to destroy the tower together. At the same time, the "stealth" contingent of the combined X-Factor, X-Force & Excalibur arrives in the era, but decides to beat the Phalanx by acting illogically and making their presence known. As they battle Shinar & the Phalanx, Douglock determines the spire can be stopped by disrupting the energy flow, and he throws himself into the flow, shutting down the spire. At the nursery, Nightcrawler helps Forge break the hold the Phalanx have on him, and he allows the eggs to be destroyed along with the rest of the Phalanx. In the aftermath, Douglock reforms, saying that unlike the rest of the Phalanx, he still has something to live for, while Forge ponders the role his humanity played in his efforts to destroy a sentient race.

Firsts and Other Notables
"Life Signs" concludes this issue, withe destruction of the Babel Spire and the Phalanx eggs, thus ending the threat of the Phalanx (or at least this contingent of them) in the process. 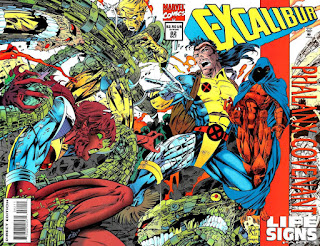 In what amounts to his final appearance, Shinar finally speaks (and does stuff). 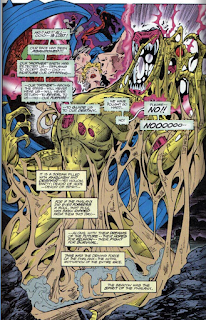 Creator Central
Ken Lashley returns to draw half this issue, and given how much crap I've been giving Adam Kubert in these reviews for his erratic schedule on Wolverine, it's worth pointing out that, despite being the ostensible regular artist on this series, he hasn't drawn the previous four issues, only draws half of this one, and won't return to the series until issue #85.

A Work in Progress
Havok provides exposition on the other threads of the crossover in what amounts to a full page ad (I have no idea how he knows Cyclops & Phoenix have joined Wolverine & Cable). 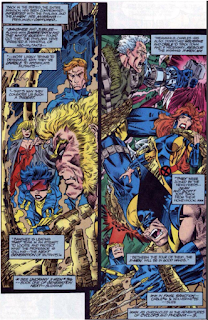 The “stealth” team uses X-Factor’s Polaris-powered craft to reach the Babel spire, believing its relative lack of technology will help shield them from the Phalanx (despite the fact that everyone is now wearing high tech quasi-space suits...). 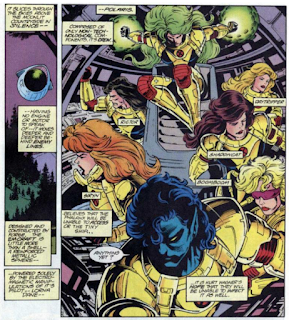 Cannonball declares he’s responsible for Doug’s death as he was leading the New Mutants at the time,, though technically, he and Dani were the CO-leaders (the dialogue bubble in this panel is also misplaced, making it look like Doug is speaking. 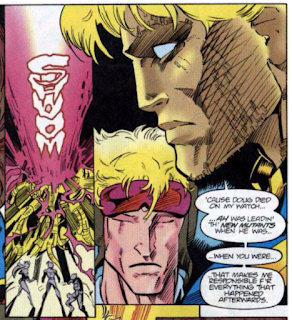 Austin's Analysis
"Life Signs" ends as it lived: dully & probelmatically. With this conclusion, the issue does little to improve on the failings of the previous chapter: the immediate plot is still entirely disconnected from the events in the other two stories (despite dealing with the bigger threat, considering the X-teams here are working to prevent the complete galactic extinction of organic life), Shinar is a nothing of a villain, and despite theoretically starring three combined X-teams, the only ones getting any significant page time remain the quartet of Cannonball, Wolfsbane, Douglock and Forge. Which isn't necessarily bad, but given that a lot of the draw of these kinds of crossovers is seeing the interactions of big groups of characters, sidelining 7/8th of those characters sucks a lot of potential fun out of the story.

Of course, not all the problems in this issue are inherited; it makes plenty of questionable decisions all on its own. The Babel Spire is destroyed when Douglock throws himself into it, disrupting the flow of energy, which also somehow cures the infected humans who make up the tower and destroys all the Phalanx in the area (except for Douglock, who of course survives, because there's more mystery to be milked out of his relationship to Doug Ramsey & Warlock). Forge goes from having a grudging respect to the Phalanx thanks to his power in the previous chapter to somehow being controlled by the Phalanx via his power in this one, with little explanation. And after having split the three teams into "stealth" and "strength" groups last chapter, here the stealth team decides the best way to stop the Phalanx is...to abandon stealth in favor of a loud, deliberately-obvious attack (meanwhile, the "strength" team does nothing but provide brief exposition, left to be a completely un-fired Chekhov's Gun).

Without a doubt, "Life Signs" is the weakest of three "Phalanx Covenant" stories. It sidelines the majority of its characters and exists in a narrative cul-de-sac ("Generation Next" sets up Generation X and "Final Sanction" is actually about defeating the main Phalanx force and freeing the X-Men; this is all about defeating the threat that only exists within the pages of this story, and is thus entirely disconnected from the rest of the crossover and any subsequent narrative impact). Worst of all, it's boring. The first chapter is all setup, the second is mostly talking, leaving this issue to depict the majority of the mutants vs. Phalanx action while also wrapping up the overall story and as a result, events are too rushed & muddled to appreciate the sudden inflection of action. Which means "Life Signs" is, at worst, a bore and, at best, a mess.