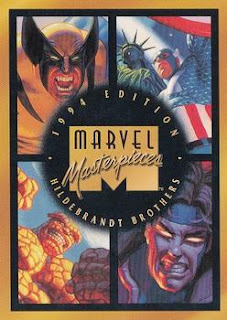 After what seems like months and months of build up, this month finally sees the release of Generation X #1, the eighth(!) monthly X-book! Meanwhile, fresh off "Phalanx Covenant", X-Factor begins the lead-up to "Age of Apocalypse", all the books get the Deluxe treatment, and we look at the third series of Marvel Masterpieces cards.

Power Rankings July 1994
In which "Phalanx Covenant" lifts some ships and sinks others.

The flag ship books are in the top spots once again, with Uncanny edging out its little brother on the back of Joe Maduereira's art and a creepy horror movie vibe to kick off "Phalanx Covenant".

Wolverine bounces back strongly thanks to the return of Adam Kubert and narrative relevance, with a a fun crackjack kickoff to "Final Sanction".

Jeph Loeb comes aboard the series with a fun character-driven story. Some of the stuff involving the Morlock Ceremony of Light seems like nonsense, but Cable & Domino going on a date is inoffensive fun.

This is pretty much the "average" line for the month, with all three books featuring mostly fine, largely character-driven stories and art that ranges from "serviceable" to "swipey", with the end result straddling the line between good and bad.

The boring, dirge-like "Life Signs" drags down a couple of titles that are routinely pretty strong. X-Force gets the edge thanks to Tony Daniel's art being slightly more interesting than Duursema's, and the fact that some of the X-characters actually fight some Phalanx in that one.
Newer Post Older Post Home
Posted by Austin Gorton at 12:00 PM