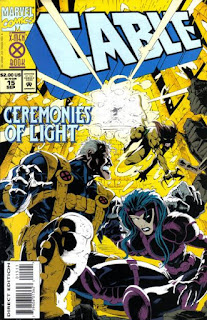 In a Nutshell
Cable & Domino go on a date.

Plot
Months ago, Thornn tries to save a young Morlock named Sarah as Mikhail Rasputing floods the tunnels to kill the Morlocks, but is swept out into the river. Later, Cable & Domino go on a date, teleporting in to Central Park. They are interrupted by the arrival of Thornn, who needs their help. She keeps hearing voices in the empty Morlock tunnels, telling her the Morlocks were taken to another place and are too afraid to return, unless the Ceremony of Light is performed. Domino is suspicious, but Cable senses some truth to Thornn's words, and the three proceed to perform the Ceremony of Light, in which light from the surface is reflected into the tunnels for an hour. During the ceremony, Sarah appears, telling Thornn the others are still too scared to come out, but she promises to come back someday. Cable offers to help Thornn, but she insists she belongs in the tunnels, so Cable & Domino depart, with Domino telling Cable the night turned out to be a special one.

Firsts and Other Notables
Though it's doubtful this was the intent at the time, this issue is considered the first appearance of future member of the X-Men Marrow, who will eventually be revealed as Sara, the young Morlock girl who Thornn tried to rescue from Mikhail's suicidal actions and who returned to speak with her, Cable & Domino in this issue. 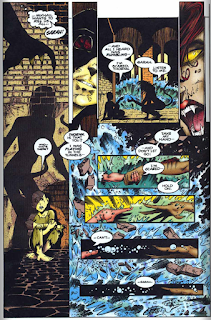 This is possible (despite Sara's young age relative to the later teenaged Marrow) because it is eventually revealed that the Morlocks didn't drown in Uncanny X-Men #293, but rather were shunted by Mikhail to the extradimensional "Hill", where time passes differently (allowing Sara to grow up and return much older than the amount of time since she left), something which is hinted at here as Sara talks about the Morlocks being on "the other side". These extradimensional Morlocks will eventually return as Gene Nation (with Marrow amongst their number), who will be the chief recurring antagonists in the X-books immediately post-"Age of Apocalypse". 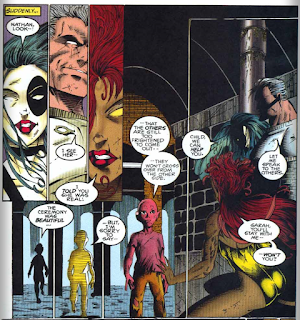 Jeph Loeb, frequent collaborator of Tim Sale on the various Marvel "color" series and some acclaimed Batman stories and current head of Marvel's TV productions, becomes the series' new regular writer with this issue (its first since Fabian Niceza's departure in issue #8), though as he's working with a guest penciler in this issue and is spelled next issue by Larry Hama (concluding "Final Sanction"), the new full creative team of Loeb & Skroce won't debut until issue #17. Loeb will stay on the series through issue #39, during which he'll also be writing X-Force (and, briefly, X-Man), giving him a little corner of the X-universe to call his own.

Thornn, last seen being returned to the Morlocks as a captive after the defeat of Toad's Brotherhood of Evil Mutants in X-Force, pops up in this issue, revealing that she didn't die with the other Morlocks in Uncanny X-Men #293. She will appear again alongside Feral shortly in X-Force. 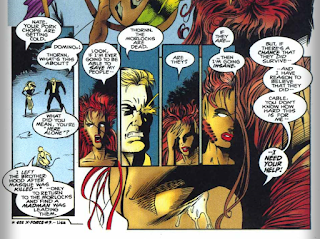 Cable & Domino help Thornn perform the Ceremony of Light, a Morlock tradition in which they reflect daylight into their tunnels for an hour every year. It's a weird tradition (why just an hour?) that I don't think ever gets referenced outside this issue. 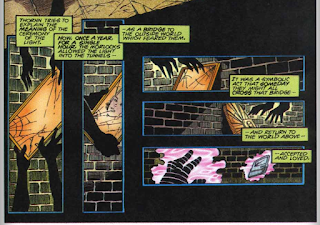 On their date, Cable & Domino play a desert island game, in which Cable says the book, music and person he'd like to be stranded on an island with are The Art of War, Sinatra at the Sands, 1966 and his dad, because if anyone could figure a way off the island, it would be him (which is something I've often thought about my dad as well). Also, I get that Art of War was chosen because Cable's supposed to be this badass warrior, but c'mon, that'd be a terrible book to have as the only book you could read over and over (Domino's picks are Alice in Wonderland, Harrison Ford, and Never Mind the Bollocks by the Sex Pistols). 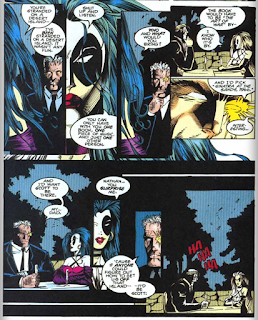 The Chronology Corner
This issue takes place before "Phalanx Covenant", after X-Force #37.

The Reference Section
One of the diners at the restaurant were Cable & Domino go on their date compares Cable to Arnold Schwarzenegger and Domino to something out of Madame Butterfly. 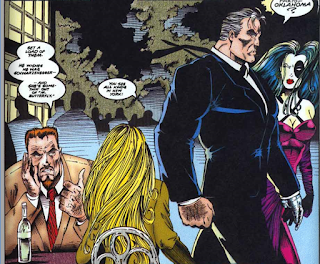 Young Love
Cable & Domino go on a date in this issue which is, as Sam (who I have to believe is playing dumb) inadvertently reminds us, is a big deal since the vast majority of romantic Cable/Domino interactions we've seen thus far were between Cable and Vanessa-posing-as-Domino (though the immediate interactions between the just-freed Domino & Cable in X-Force #15 belie some of the "we've always been close, but not like that" talk in this issue). 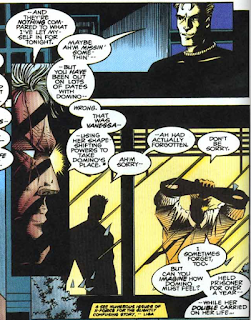 Austin's Analysis
It took almost two full years, but this issue finally provides an epilogue of sorts to the death of the Morlocks in Uncanny X-Men #293 (and also opens the door for their return, sort of, intentionally or not), and in Cable of all places (set against a backdrop of Cable & Domino going on a date). But that's 90s comics for you, I guess, and the effort to acknowledge the passing of the Morlocks is appreciated, however belatedly or misplaced. As much as this issue is, retroactively, about bigger things (the first appearance of Marrow, setting up the debut of Gene Nation) and the whole Ceremony of Light seems an odd addition to the Morlock mythos, it's nevertheless a surprisingly effective issue, dropping Cable & Domino into an unfamiliar setting (awkward first date!) that manages to be both consistent to their characterization while also revealing new things about them. A romantic comedy leading into an examination of loss & grieving isn't exactly the kind of plot one would expect to see in a Cable series, but this mostly works, and it works all the better for how surprising (and seemingly-out-of-place) it is. A strong start to the Loeb era of the title.