Force in Focus: Return of the Jedi #2 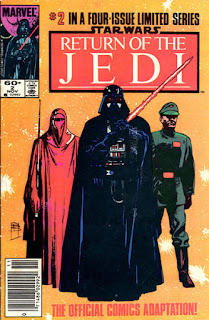 In a Nutshell
The Star Warriors escape from Jabba the Hutt, and Luke learns he must face his father again.

Plot
As Jabba's guards prepare to push Luke into the Sarlaac pit, Luke issues Jabba one final warning to free him and his friends, or die. Then Artoo launches Luke's lightsaber, hidden inside Artoo, and Luke attacks the guards, alongside the previously-disguised Lando. Aboard the sail barge, Leia takes advantage of the confusion to strangle Jabba to death. As the sail barge blasts the skiff hovering over the pit, Lando is knocked overboard, and as Han & Chewie try to rescue him, they inadvertently trigger Boba Fett's jetpack, sending him flying into the Sarlaac's maw. Luke leaps over to the sail barge as Han retrieves Lando and Artoo frees Leia before herding Threepio off the barge. Together, Luke & Leia turn the barge's gun on the ship, destroying it, and they fly away aboard the other skiff with their friends. As the group departs Tatooine, Luke promises to rendezvous with the Rebel fleet, but first goes to Dagobah. Meanwhile, the Emperor arrives on the Death Star, and assures Darth Vader everything is going as he has forseen. On Dagobah, Yoda confirms that Darth Vader is Luke's father, and the spirit of Obi-Wan reveals that Leia is his sister, before insisting to Luke that he must confront his father again.

Firsts and Other Notables
There are four notable character happenings in this issue. First, Jabba the Hutt is killed by Leia in this issue, much as in the film (she strangles him with her chain). 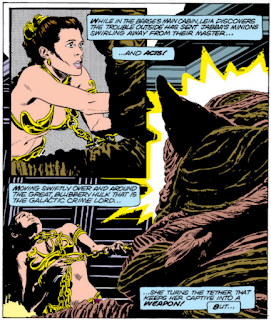 Second, Boba Fett dies after Han blindly activates his jet pack and he flies off into the Sarlaac Pit. As if his onscreen death wasn’t embarrassing enough, this issue breaks his “silent cool” to have him deliver an ultimately superfluous threat to Han before he gets accidentally whacked into the Sarlaac.

Third, the Emperor makes his first full on-panel appearance (and thanks to the fact that he is introduced and destroyed in Return of the Jedi, and this adaptation is a limited series, the Emperor himself will never actually appear in the regular comic book series). 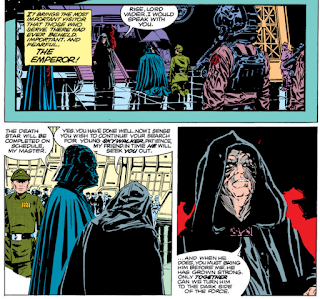 Fourth, Yoda sort of dies in this issue, as he tells Luke he’s dying (as in the film), but unlike the film, his death (and fading into nothingness) isn’t shown, and a narrative caption simply says Luke is leaving him to some much needed rest. 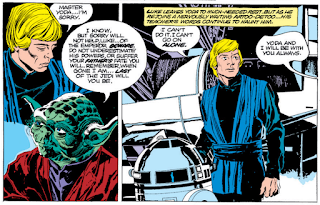 As with the first issue, there's a title page image beneath the credits. 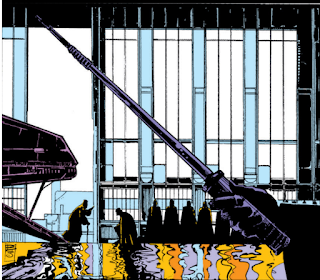 A Work in Progress
Narrative captions explicitly underline the parallel between Luke & Leia’s swing across the Death Star chasm and their escape from Jabba’s sail barge, while Han offers up a possible explanation for his post-carbonite devotion to the Rebellion. 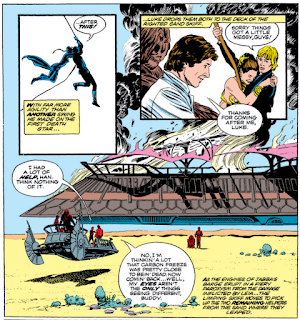 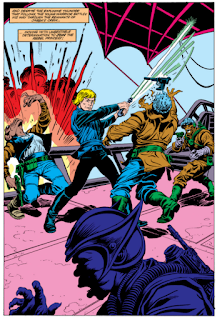 Um, Actually
There’s a brief two panel sequence of Leia finding herself still chained to the dead Jabba and unable to escape that doesn’t appear in the movie. 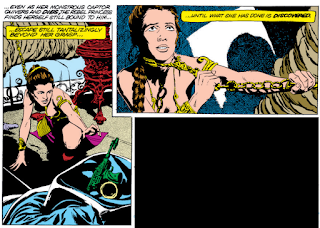 Luke is a bit more acrobatic/physically superhuman during his fight with Jabba’s goons, a rare case of the comics taking advantage of their medium to have Luke do things that would be more difficult/cost prohibitive to do in the films at the time.

Yoda claims Obi-Wan would have told Luke the truth about his father years ago, had Yoda allowed it. 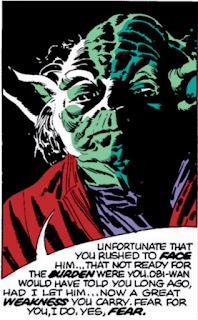 Obi-Wan’s explanation to Luke about Anakin’s fall has the same half-truths and wily Obi-Wan “certain point of view” BS as in the movie, but here he also specifically says he first met Anakin during the Clone Wars, when we know no they actually first met about ten years before that. Here, Obi-Wan simply tells Luke that Leia is his sister, leaving the “your feelings serve you well” line to come after Luke declares he must face Vader so as to spare an untrained Leia from doing so. I’m not sure if that’s due to a script change between the draft Goodwin received and the final cut, or artistic license on Goodwin’s part. 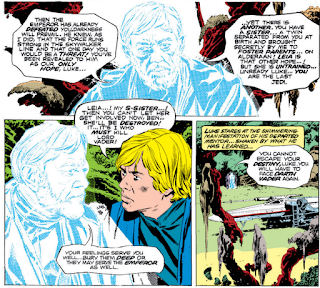 Austin's Analysis
Picking up where the previous issue's climax left off, this issue is split pretty evenly between the action packed showdown at the Sarlaac pit, and more quieter, character-driven/plot setup material. As a result, with the action relegated to the first half, this issue concludes with a more ominous cliffhanger, as Luke is assured he must face Darth Vader again. It represents a less immediate threat than the cliffhanger ending of the previous issue, yet still works as a narrative hook, setting up the driving goal of Luke for the rest of the story: confront and defeat his father - without killing him. We all know where this is going - and so did most readers picking up this issue off the stands - but that's still a killer hook on which to end the issue, even if it isn't as visceral a cliffhanger as the previous issue's.