Force in Focus: Return of the Jedi #1 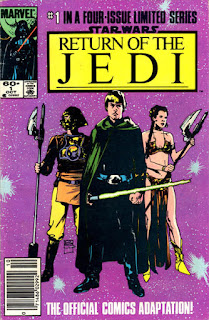 Plot
Darth Vader arrives aboard the second Death Star, telling Moff Jerjerrod that soon the Emperor will be arriving to ensure the station is completed on schedule. Meanwhile, on Tatooine, Artoo & Threepio arrive at Jabba's palace. Brought before the gangster, they play a message from Luke, who gives the droids to Jabba as a gift. Later, a bounty hunter delivers a captive Chewbacca to Jabba. That evening, the hunter frees Han Solo from carbonite, removing her to reveal herself as Leia. But Jabba captures them before they can escape, and Han is thrown in the dungeon with Chewbaca. Later, Luke enters the palace and tells Jabba to free his friends, or die. Jabba responds by dropping Luke into the rancor pit, where he's forced to fight the massive rancor. Luke manages to slay the creature, after which Jabba declares that Luke, Han & Chewbacca will be executed by being thrown into the Great Pit of Carkoon, where they will be digest by the Sarlaac. Jabba and his entourage fly out into the desert aboard his sail barge, the captives are taken to the pit aboard a smaller craft. Luke tells Han not to worry, he's taken care of everything, as below them, the Sarlaac stirs.

Firsts and Other Notables
For their Return of the Jedi adaptation, Marvel breaks with previous precedent and presents the story via a standalone miniseries, rather than as issues of the ongoing Star Wars book. They also bring back the same creative team (writer Archie Goodwin and artists Al Williamson & Carlos Garzon) who handled the Empire Strikes Back adaptation (which prompted previous series' writer David Michelinie to leave the series when he learned he wouldn't get to adapt Jedi).

The covers of all four issues feature a different trio of characters (which is rather unexciting and makes the series look more like Handbook-style reference guide than an exciting film adaptation), drawn by Bill Sienkiewicz.

The issue opens with a cover page listing the credits and a single panel image. 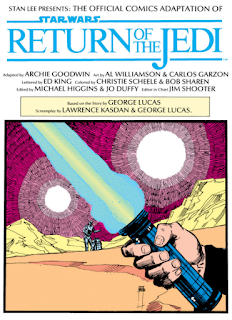 Han is of course thawed out of the carbonite block he’s been in since the end of Empire Strikes Back, bringing to an end the “Search for Han Solo” (just as what’s left of it) and setting up his return to the narrative of the regular series (he’ll pop up there in issue #81, the series’ first post-Jedi issue). 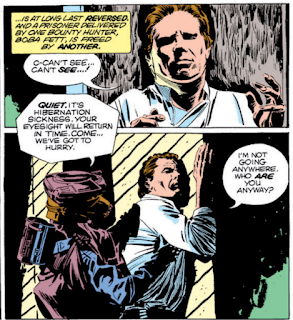 Though Jabba has appeared a few times in the main series a couple times at this point, this issue marks his first appearance in his “correct” gargantuan-slug form. 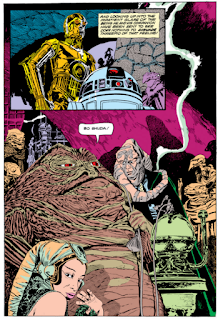 Being the start of a new film adaptation, there is of course a bevy of new characters, vehicles and looks that introduced here, including the Imperial shuttle, the unfinished second Death Star, Imperial Moff Jerjerrod, Bib Fortuna, Jabba's Gamorrean guards and the other denizens of his court, the droid major domo EV-9D9, Leia & Lando’s bounty hunter/palace guard disguises and Luke's all-black Jedi Knight ensemble, the Rancor, Jabba’s sail barge and the Sarlaac pit.

Leia & Lando exchange a brief exchange after Leia is captured that doesn’t appear in the film. 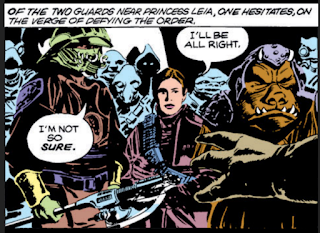 Much has been made over the years of the fact that, as presented, Luke/the Rebels plan for rescuing Han doesn’t make a lick of sense/requires a level of anticipation of specific actions beyond even a Jedi’s abilities to come out the way it does. This issue adds an additional wrinkle to that notion, as Luke tells Han getting them sentenced to death by Sarlaac was part of the plan, as the palace was too heavily guarded, suggesting Luke somehow knew Jabba would do that instead of just shooting him (or something) after the rancor (who Like thought wS a legend and thus explicitly wasn’t expecting to find in the palace) failed to do so. 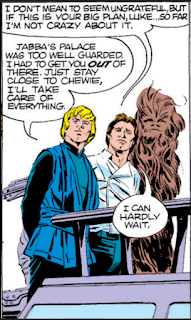 Or else Luke is just trying to put a positive spin on a bad situation for Han’s benefit and making it sound like everything is part of his grand plan.

The issue concludes with a series of pinups featuring an Imperial shuttle, Bin Fortuna, and the Max Reno Band & Salacious Crumb, the latter two of which don’t stick out in the issue otherwise. 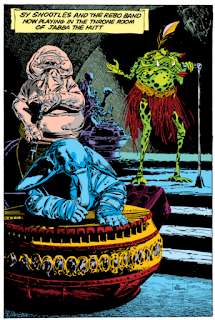 A Work in Progress
The opening crawl in this issue is slightly different from what appears in the movie. 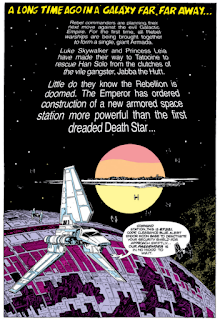 Jabba’s dialogue is not usually presented in Huttese, nor via the standard comic book technique of bracketing the dialogue with a footnote declaring it to be translated. 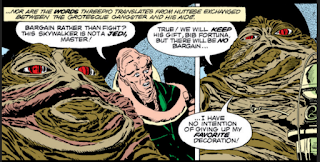 Jabba refers to Threepio as “Talkdroid”.

Jabba tells Luke he’s been killing his kind since being a Jedi meant something. 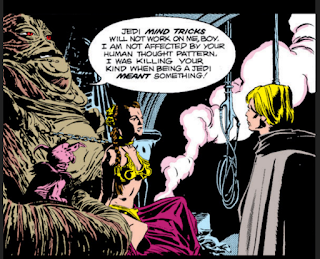 Luke was aware of rancors prior to encountering one in Jabba’s pit, though he always believed them to be the stuff of legend & myth. 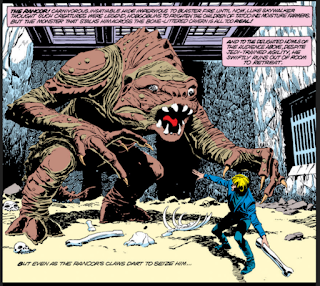 Um, Actually
In an early example of the Expanded Universe/non-film sources making Boba Fett seem more badass than he appears in the films, a narrative caption declares Fett is the only denizen of Jabba’s palace to consider Luke a threat. 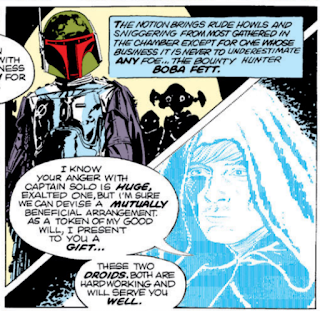 Just Yesterday, In a Galaxy Surprisingly Close By
The droid torture room in Jabba’s palace is described as the boiler room. 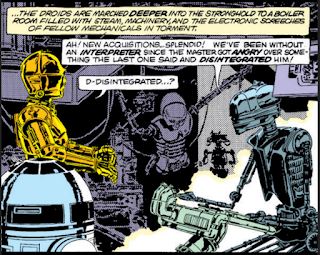 Austin's Analysis
As is usually the case with the film adaptations, my chief areas of interest are those places where the story differs from what's presented in the film, and the process of adapting the story for a different medium, especially the way it gets divided up into multiple chunks. There's not a lot of extra scenes or significant deviations from the film in this issue (for example, the mostly-completed deleted scene of Luke constructing his lightsaber before sending the droids to Jabba's, which turned up on the saga's blu-ray release, isn't here), but Jabba's palace is much less atmospheric without the lighting & music of the film (and with Jabba speaking Basic directly), suffering a bit in a way that other set pieces in the previous adaptations didn't.

In terms of adaptation, it's always interesting to note where the issue breaks are inserted into the movie's story (especially given the serial inspirations baked into the Star Wars movies). It might have made sense to close the issue on Luke's fall into the rancor pit, as it represents the most overt physical danger for any of the heroes, but at the same time, breaking before the big battle at the Sarlacc pit makes sense, as it allows this issue to feature a little bit of action (via Luke's battle with the rancor) and still end on the almost-literal cliffhanger of Han, Luke & Chewbacca, poised over the Sarlacc's yawning maw, which makes for a great "how will our heroes get out of this jam?!?" moment on which to conclude the issue.

Next Issue
The Search for Tay Vanis takes a new approach in Star Wars #77.