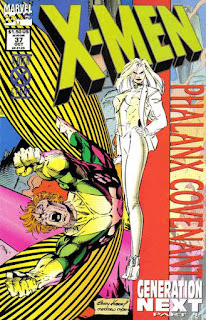 In a Nutshell
"Generation Next" concludes as Blink sacrifices herself to save the rest of the nascent Generation X.

Plot
On board the Naval destroyer in San Diego Bay, Harvest attacks the escaped young mutants, as Banshee, Emma, Everett & Jubilee sneak aboard. But the young mutants are saved by the timely arrival of Sabretooth, who fights off Harvest before Banshee flies in to finish him off. However, Sabretooth realizes Paige has two scents and slashes her, forcing her to shed her skin - and the techno-organic material with which she had been infected. Just then, Harvest reappears, having reconstituted himself from the material of all other Phalanx aboard the ship. Emma orders everyone to escape the ship while Banshee & Sabretooth hold him off, but Blink realizes Harvest will just keep coming, and once he's killed them, he'll kill all other mutants and, eventually, all of humanity. Using her power to teleport away part of the ship's deck to prevent the others from interfering, she then turns her power on Harvest, creating a spatial disruption he can't counter. But as he disappears, Harvest grabs Blink, pulling her into the disruption & killing her as well. As the surviving mutants climb ashore, they're left to ponder where the sacrifice of one who might have been their friend was too steep a price to pay.

Firsts and Other Notables
This issue concludes the four part "Generation Next" portion of the "Phalanx Covenant", concluding with the immediate threat of Harvest defeated and the future Generation X mutants safely rescued by the ad hoc Banshee/Emma led team. 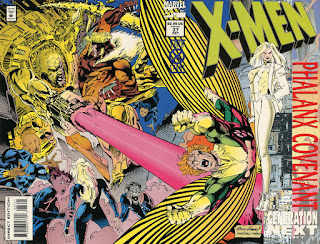 All save Blink, who dies in this issue, sacrificing herself to destroy Harvest. She will return, in an alternate universe form, a few months from now in "Age of Apocalypse" (it would be interesting to know Lobdell/Nicieza introduced and killer her here with the intention of bringing her back for AoA, as another way to show how different that world is, or if the fan response to the character here motivated them to include her in AoA). 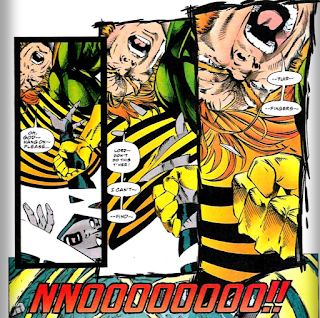 Sabretooth returns in this issue, of his own volition, after having escaped in the previous issue (and picked up his costume along the way), in another "is Sabretooth becoming a good/better guy?" tease. He will return to captivity at the X-Mansion following this.

Jubilee discusses her fear of losing control of her powers and hurting someone (while making an un-footnoted reference to the Uncanny X-Men portion of “Acts of Vengeance”) with Emma, providing more setup for Generation X. 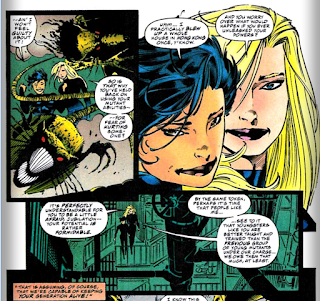 A Work in Progress
Narration refers to Monet as M, despite the fact that she’s never been called that in-story and, at this point in time, would have no reason to need a codename.

It’s confirmed here that Harvest is the person shown getting into a van labeled Phalanx in Uncanny #308.

Harvest notes that his connection to the Phalanx hive has been severed; there’s no footnote, but this is due to events elsewhere in the crossover.

Everett is surprised at how good Banshee’s hearing is, to which Banshee responds that with his power, it’s either hear well or be deaf, which...doesn’t make much sense. 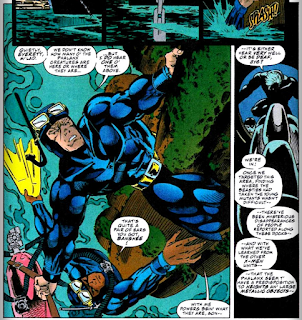 Emma gets in a dig on Gambit’s poor French when Jubilee spouts some phonetic French, which prompts the question: how does Emma even know who Gambit is, since she never encountered him before and has been in a coma for pretty much the whole time Gambit has been at the rebuilt X-Mansion (presumably, Banshee has, at this point briefed her - verbally or telepathically - about current events and personnel and whatnot). 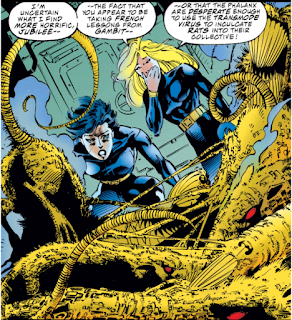 The soon-to-be Gen Xers reaction to Sabretooth’s sudden arrival is pretty great, as Angelo & Clarice are horrified and Paige struggles to figure out who he is, knowing at least that it’s not Wolverine. 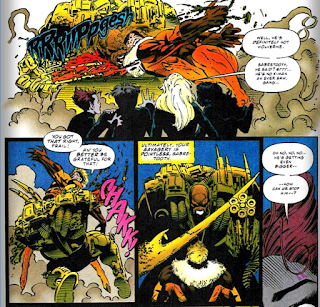 Paige does something that happens all too rarely in this kinds of crossovers: upon meeting Banshee, clearly introduced herself, and mentions that she knows his daughter (whom she met in “Child’s Play”). 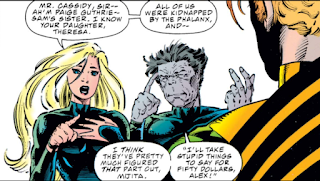 Paige's power continues to be fairly nonsensical; here, she tears off her skin (including her hair) to reveal a metallic, almost robotic form underneath, and she says she'll be back to normal in a few hours (she is her usual Caucasian blond self by the end of the issue), but it's not clear how (eventually, it'll be established that she has to shed her new form to get back to her default one). 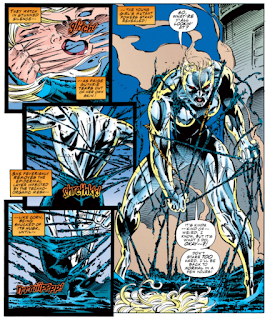 Austin's Analysis
With the penultimate chapter devoted in large part to Generation X setup, the conclusion to "Generation Next" is an action packed one, highlighted by the return of Sabretooth and the sacrifice of Blink (who manages to leave an impression despite her relative lack of screen time). Otherwise, "Generation Next" ends on par with the rest of the crossover: strong art (between Madureira & Kubert, arguably the best of the entire crossover), consistent characterization, a good balance between action and character beats, and plenty of setup for Generation X that just manages to not cross over the line into being obtrusive or distracting. While it tells the most limited story of the three "Phalanx Covenant" parts (as both "Life Signs" and "Final Sanction" are concerned with bigger threats and feature more characters), it easily rises above the rest, thanks in part to being more limited (which allows more room for characterization while giving the narrative clear, easy-to-grasp stakes) and to the consistency of the craft involved. "Life Signs" and "Final Sanction" are more big picture, in terms of actually defeating the larger threat of the Phalanx and freeing the X-Men, but nevertheless, when I think about the "Phalanx Covenant", it is the four issues of "Generation Next" which come to mind first and foremost, and stand as the most successful and entertaining portion of the story.