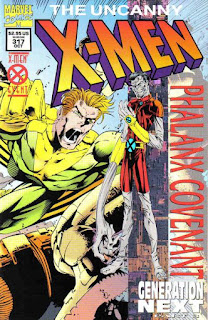 "Enter Freely and of Your Own Will"
October 1994

In a Nutshell
Bannshe & Emma work to locate the captive young mutants, while Monet facilitates their escape.

Plot
Paige Guthrie awakens to find herself being held captive along with four other young mutants: Angelo, Clarice, Gregor, and the mute Monet. Paige tries to lift their spirits, declaring that the X-Men will find them, but is stunned to discover she's seemingly been infected with the techno-organic virus. Elsewhere, Banshee, Emma Frost, Jubilee & Everett Thomas arrive at Frost's west coast home, Emma having telepathically tracked Paige to California. She suggests their best chance of locating the captive mutants is via a nearby SHIELD safe house. Elsewhere, the young mutants are checked on by their Phalanx jailer, Harvest, who Clarice is able to drive away using her power. As Banshee & Emma inflitrate the SHIELD base, Monet suddenly speaks. Using components cannibalized from the techno-organic suits they're all wearing, she blasts Gregor, revealing him to be a Phalanx plant. She then proceeds to punch an opening in their cell, leading them onto the deck of a battleship in the middle of the ocean. But just then, Paige collapses, overwhelmed by the techno-organic infection.

Firsts and Other Notables
More new mutants/future Generation X cast members are introduced this issue. First is Skin, a Latino mutant named Angelo whose power is that he has lots of extra skin (kind of like if Mr. Fantastic had difficulty pulling himself together after stretching himself out), who is another one of those "pure" Gen X characters (in that the majority of his notable appearances and developments occur within the the confines of that series). He gets the "standalone figure next to the foil enhancement" slot for this issue's cover. 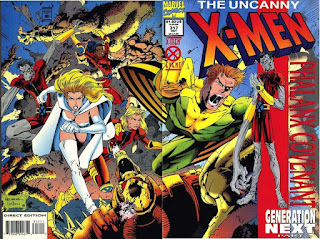 The other is Clarice, a young woman with purple skin and little diamond facial tattoos, who displays some kind of teleportation abilities in this issue. She won't join Generation X, but will return in "Age of Apocalypse" as Blink, where she will become a fan favorite character and develop a cult following, leading to her headlining the Exiles book for most of the 00s. 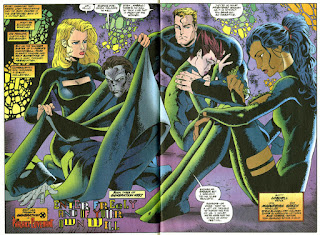 This issue also introduces Harvest, another specific Phalanx villain who will serve as the immediate antagonist for the rest of this story. 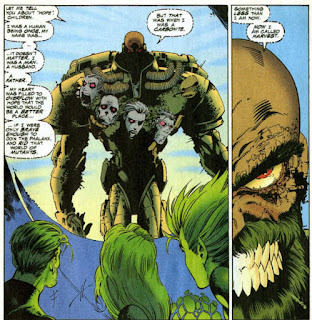 This issue contains a survey from Marvel asking readers to answer a series of questions about the direction of Marvel, though most questions are about X-Men characters, or Spider-Man. Of note are things like "would you buy two Wolverine books every month?" (something which does eventually happen, though it takes a lot longer than you'd think it would have) and "do you want Gambit & Rogue to get married?" (something else which eventually happens, but which takes even longer to come to pass). And, of course, Marvel is careful to let would-be respondents know that a photocopy of the survey is acceptable; wouldn't want to risk damaging this sure-to-be-valuable collectors item of an issue, of course. 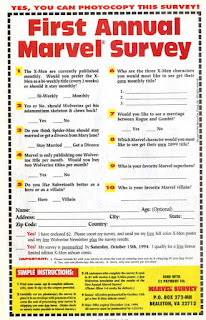 Setting up her decision to leave the X-Men to train with Generation X, Jubilee complains to Everett about how ineffective her power is compared to the rest of the X-Men. 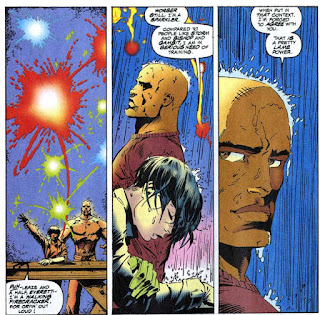 Upon orchestrating their escape, Skin asks why Monet waited until now to make her move. She tells him she has two reasons she’ll tell him if they survive; I don’t think we ever find out what they are. 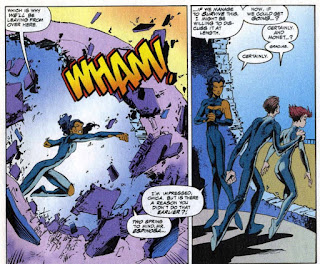 A Work in Progress
Blink’s ability to use her power, however briefly, against Harvest, makes Skin realize the Phalanx can’t suppress their powers. 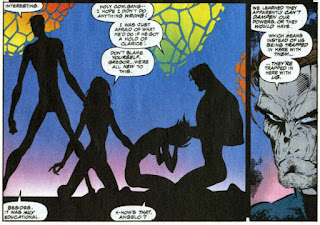 We see Monet speak for the first time in this issue. 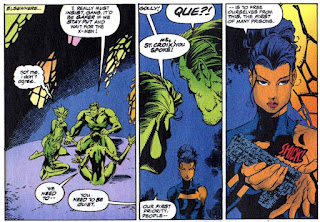 The Grim 'n' Gritty 90s
It’s nice of the Phalanx to include cleavage windows for Paige and Monet in their techno-organic bodysuits.

The 90s threw up all over this Cookie Crisp ad (including the fact that it comes with a X-Men trading card). 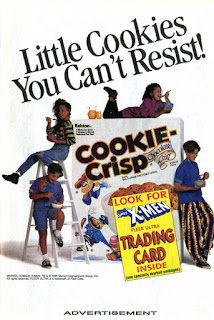 Austin's Analysis
While all of "Generation Next" is generally about laying the groundwork for Generation X, this is the first chapter of the story to be almost exclusively about that. It provides the most page time yet to future Gen Xers Paige, Monet and Skin (and eventual cult favorite Blink), and even the cutaways to the ad hoc X-Men team are about setting up Generation X: Jubilee's conversation with Everett foreshadows her upcoming departure from the X-Men, while the Emma/Banshee infiltration plot is all about showcasing the two of them as a working pair, establishing the dynamic that will be on display as they work as co-headmasters of the new Xavier School.

None of which is to say this is a bad issue. Backed by Joe Madureira's art (which continues to be exciting & effective even in quieter scenes), Lobdell's handle on characterization (it's kind of amazing how much of the future Gen X characterization Lobdell is already displaying, from Skin's misanthropy to Monet's unique mix of hyper-competence & arrogance, to Paige's desperate desire to exude hyper-competence, especially in the face of Monet's actual competence), and enough plot momentum (with the kids escaping their prison on their own even as Banshee & Emma draw closer to their location), there's plenty to like here even within the immediate context of the story.