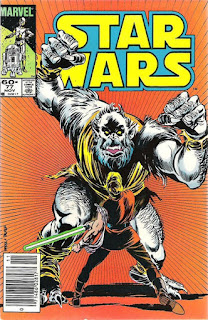 "Chanteuse of the Stars"
November 1983

In a Nutshell
Luke & Leia sneak into a diplomatic summit in search of info left behind by Tay Vanis.

Plot
Returning to the Rebel base on Arbra, Leia, Luke, Lando & Chewbacca are stunned to learn that the Rebellion has intercepted Imperial information on the whereabouts of Tay Vanis that was seemingly intercepted by Han Solo. Rebel command sends Lando & Chewie to follow up that lead, while Luke & Leia, accompanied by the Hoojib Plif, are sent to a diplomatic summit on Kabray station to follow another Vanis lead. Upon arrival, Luke & Leia split up to search the station for information reportedly left there by Vanis. Luke & Plif search the private suites and discover a data card left behind by Vanis, as well as a plot to kill an Imperial Governor visiting the station, while Leia searches the kitchens and is mistaken for Shirley, the Chanteuse of the Stars meant to perform for the Governor. As Leia begins the performance, Luke attempts to intercept a bowl of poisoned soup, but is waylaid by a group of Zeltrons until one of the Lahsbee delegates transforms into a monstrous Huhk. In the commotion, Luke knocks away the soup and Plif advises Leia to keep singing, as it seems to calm the Huhk. The crisis averted, Luke is left hoping Leia knows a lot of verses to the song she's singing.

Firsts and Other Notables
The "Search for Tay Vanis" continues this issue, as the Star Warriors are divided up, with Luke & Leia going to a diplomatic space station in search of some information left behind by Vanis, while Lando, Chewie and the droids are sent chasing down a lead on Vanis that was reportedly delivered by Han Solo (in what seems very clearly to be the setup of a trap); their half of the search will be picked up in issue #79 (next issue is a fill-in).

The Rebel general giving the Star Warriors their marching orders in this issue is unnamed, but is generally considered to be General Rieekan (from Empire), who was previously established as the commanding general at the base on Arbra.

There’s a panel in this issue that functions like a greatest hit of Duffy’s run so far, in which a Zeltron, a Stentaxian and two Lahsbees all appear (with all three species featuring in recent issues). The Zeltrons and Lahsbee also feature in the climax of the issue. 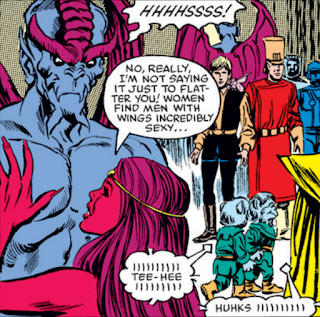 Leia is forced to sing on stage this issue which, of course, we already know she has experience doing. 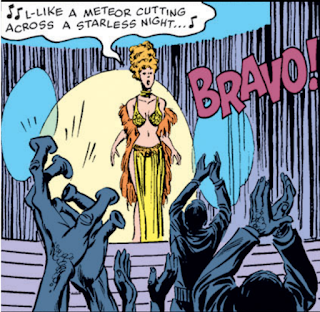 A Work in Progress
Leia & Luke are happy to see even a holographic representation of Han, like, do they not have any pictures of him?

Luke & Leia presents themselves to Imperial officials as coming from Arbra, and given that the appeal of the planet as a rebel base is that its largely hidden and off the radar, that seems like an odd risk to take.

Luke spends the climax of this issue in a madcap effort to stop an Imperial governor from eating poisoned soup, and it's never really made clear why he doesn't just use the Force to telekinetically knock over the soup bowl.

Um, Actually
The space station Kabray is described as having been the hub of the galaxy before the Empire (though current continuity would maintain it was Coruscant, as the capital planet). 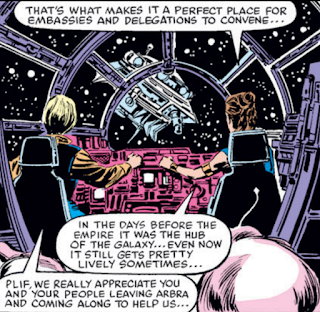 Young Love
The Hoojibs have left Arbra to help Luke & Leia find Han because of Leia’s naughty thoughts about Han. 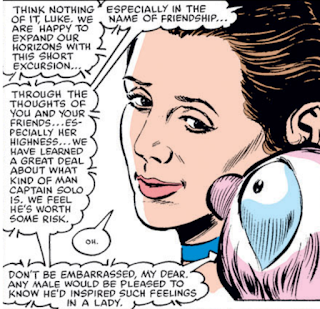 Apparently, it’s not just Dani, as all the Zeltrons in this issue are attracted to Luke (and Plif confirms there’s something specific about Luke drawing them to him). 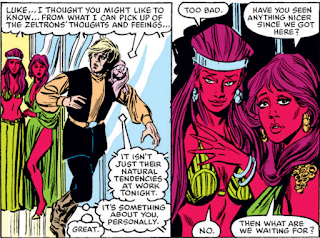 Austin's Analysis
While this technically advances the "Search for Tay Vanis" arc (with Luke discovering some data left behind by Vanis in the course of the issue), it's pretty clear Duffy's driving goal with this issue was to do a kind of Star Wars comedy farce, with Luke & Leia ducking into doorways, funning afoul of over-the-top villains, and getting caught in cases of mistaken identities. For the most part, some of that material works (though it does at times create an awakward clash with the relative seriousness of the Vanis plotline), and the desire to future the Zeltrons and Hukh in the plot is a fun use of continuity specific to Duffy's short tenure, but at the same time this is another example of Duffy not quite getting Leia.

Once again, Leia is put in a situation where she should not only be the most comfortable, but excel (here, a station specifically designed to serve as the locale for diplomatic machinations) but ends up the butt of the joke, while Luke succeeds in the mission and gets to sit back and laugh at Leia's predicament. Again, just as with previous bits of Leia mischaracterization, nothing here is necessarily catastrophically  bad, and it still doesn't seem like Duffy is intentionally trying to denigrate Leia, but all together, the various missteps seems to suggest that Duffy hasn't yet figured out that, at least when it comes to running a Rebel operation or performing diplomatic negotiations, Leia should be the most accomplished of all the main characters, not the least.

Next Issue
The Rebels bust up the Hutt crime empire and Luke learns a shocking secret in Return of the Jedi #2!