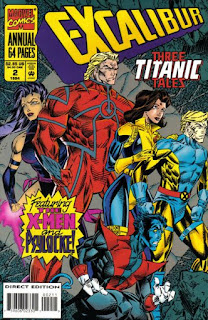 Plot
In the wake an ominous recurring dream involving his brother that Britanic worries may be a glimpse of future events, he and Psylocke attempt to cure Jamie Braddock by telepathically traveling through his memories, in the hopes of finding an explanation for his madness. They are ultimately unsuccessful, leaving Jamie catatonic, but slightly happier for having relived memories of their childhood.

2nd Story: While working as a flight attendant, Amanda Sefton is called to a mansion where Selene is being held inside a spooling chamber. Selene tells Amanda she must take her place in the chamber, or else Selene will kill everyone aboard the flight. Before Amanda can enter the chamber, however, Nightcrawler arrives and takes Selene's place. Amanda manages to fight off Selene, then helps Nightcrawler escape from the chamber, which destroys the mansion, leaving Selene, still injured from the spooling, to wander the nearby woods.

3rd Story: Kitty receives a package from her mother containing some things from Kitty's time at Xavier's school. Amongst the items is a series of computer discs that turn out to contain the personal journals of Doug Ramsey. After reading the journals, Kitty takes them to Douglock, hoping he'll remember writing them and prove to be Doug, but he does not. Kitty is angry, until Nightcrawler reminds her that no one can be who someone else wants them to be.

Firsts and Other Notables
Having only started getting official, numbered annuals last year, this marks the second and final Excalibur annual, as Marvel will switch to a "year number" for next year's annuals (and stop producing annuals for Excalibur entirely).

Jamie Braddock, last seen comatose in Excalibur #56, is at the center of the main story (where it's revealed that he's been moved to Muir Island for care at some point), as Britanic & Psylocke attempt to cure him of his madness. He'll stay comatose (and off screen) until Uncanny X-Men #444, when Claremont dusts him during his third run on that series.

In the second story, Selene is freed from the weird ribbon “spooler” that she was trapped in by Fitzroy in Uncanny X-Men #301; she'll next pop up in the early post-"Age of Apocalypse" issues of X-Man. 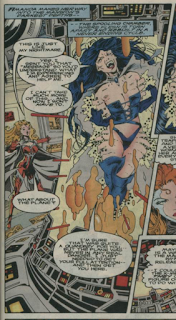 Kitty is sent some old floppy discs from her time at Xavier’s school that turn out to be a journal of sorts of Doug Ramsey, turning the story into a history of Doug, featuring some of his highlights from his time with the New Mutants, ending with his death. 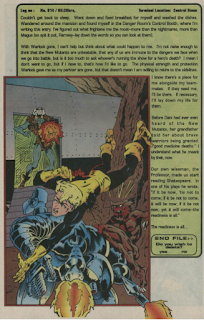 The issue concludes with three pin-ups, a pair of which are by former X-Factor artist Larry Stroman. 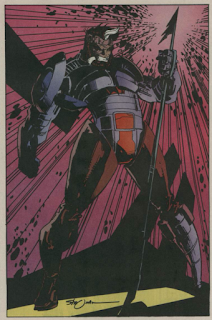 The Chronology Corner
All three stories takes place after "Phalanx Covenant", falling between issues #82 and #83 of the regular series (Nightcrawler sneaks in an appearance in X-Factor #108 between this issue and #83), with Psylocke appearing after Cable #16 and before the Bishop limited series and X-Men #38.

A Work in Progress
We’re reminded that Moira’s version of the Danger Room is the poorly named Proteus Room. 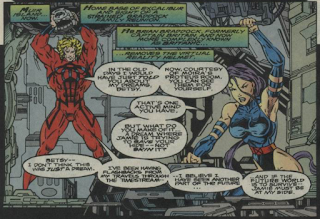 Britanic is also talking more normally in this issue (which is probably a scripting oversight moreso than an attempt to indicate he's re-acclimating after coming out of the timestream).

This issue provides a handy recap of Jamie Braddock’s history. 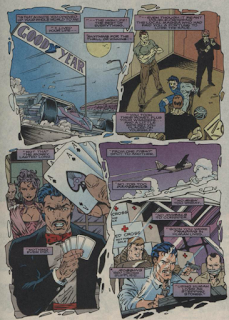 Amanda is apparently still working as a flight attendant, as she's aboard a plane when Selene reaches out for help. 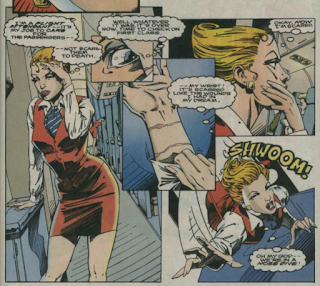 Austin's Analysis
As far as annuals (and regular issues of Excalibur of late) go, this isn't half bad. All three stories feature the same kind of bland, inoffensive scripting & art that has characterized recent issues of the main series, but all three benefit from a focus on characterization or narrative continuity. I'm still not entirely sure what's happening in the first story, but building a story around the Braddock siblings' relationship isn't a terrible idea, and the inclusion of Jamie harkens back to better, Alan Davis-drawn days. Similarly, I don't know that it was *necessary* to show how Selene escapes from the weird machine Fitzroy had her trapped in (nor that someone from Excalibur, of all teams, be involved in her escape, though there's at least something of connection between her and Amanda as both are sorceresses), but it's an appreciated bit of narrative continuity nevertheless (especially since we all know that wherever Selene shows up next, it'll be without explanation of how she escaped). And while the third story hardly breaks new ground (people angsting over how much of Douglock is Doug is already played out), presenting a recap of Doug's history is certainly warranted given the newfound prominence of Douglock to the series, and the story does so in a way that's not just a handbook entry or expository dialogue. Again, none of this is required reading, and the mundane level of craft involved makes it hard to recommend on those merits, but I'd still rather read this than, say, Excalibur fighting a one-off writer's D&D character for 64 pages.

Next Issue
Tomorrow, Cable & Domino go on a date. Next week, "Generation Next" continues in Uncanny X-Men #317 and Strong Guy fights the Blob in X-Factor #107.