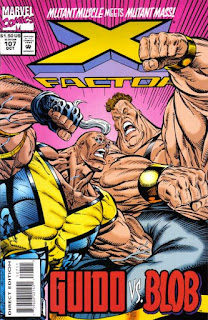 In a Nutshell
Strong Guy battles the Blob.

Plot
At the airport to catch a flight to see Lila Cheney, Strong Guy sees Blob trying to hijack a plane and intercedes, triggering a fight between the two. In the process, Strong Guy ends up absorbing large amounts of kinetic energy. Meanwhile, the rest of X-Factor is training in the Danger Room when they hear news reports of Strong Guy's fight. Back at the airport, Strong Guy unleashes the excess kinetic energy on Blob, culminating in a fuel truck explosion that knocks out Blob. As X-Factor arrives on the scene, the press swarm the triumphant Strong Guy, who collapses from exhaustion before answering any questions.

Firsts and Other Notables
This is the only issue of the series during his brief run on the book that Todd DeZago writes entirely on his own - having shared some combination of plotting & scripting duties with JM DeMatteis & Scott Lobdell in previous issues (while poised to script the plots of the next series writer, John Francis Moore, through issue #111).

X-Factor is shown training in their Danger Room for, I believe, the first time (in all other appearances, the gag was they couldn’t get into it/nobody thought they needed it). Specifically, Forge is helping prep Rahne for hunting someone who can change shape, a setup for X-Factor’s search for Mystique starting next issue. 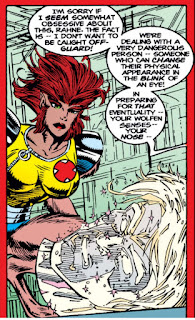 After absorbing excessive kinetic energy during his fight with Blob, Strong Guy experiences what he believes to be indigestion; this is actually the first indication of the powers-related heart problems that will sideline the character post-“Age of Apocalypse”. 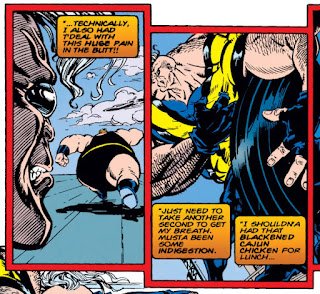 A Work in Progress
Blob finds a novel use for that weird hunk of hair on the top of Guido’s head. 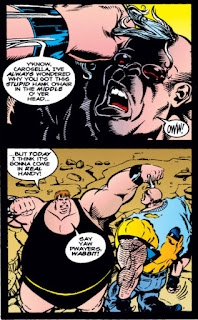 According to X-Factor’s files (which Guido read after Havok took away his Nintendo until he finished them), Blob weighs in at 510 lbs. 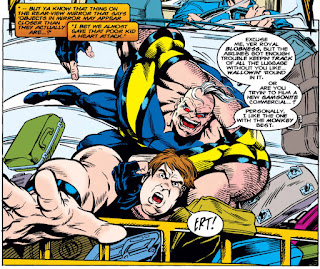 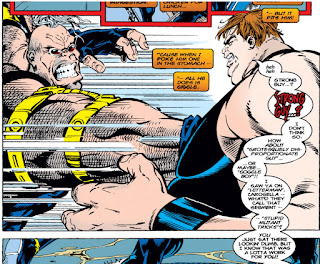 Strong Guy retorts by telling him not to disparage Letterman, as he set Guido up on a date with Sandra Bullock next week.

Austin's Analysis
This issue features a mildly intriguing (in a "super strong vs. extremely durable" kind of way) Strong Guy/Blob slugfest that's really just about the fight and the way Strong Guy goes about prevailing against his foe (there isn't even any setup for the fight in the issue itself, aside from a few early narrative captions; it just starts with the pair fighting). There's a few bits (Wolfsbane's training & Strong Guy's health issues) that, in retrospect, setup later plot points, but otherwise, this is entirely self-contained and almost entirely focused on just one character. It's action heavy, but very much an example of a post-crossover "breath-catching" issue wedged between two larger, multi-part stories with bigger impacts on the overall narrative. To be clear, nothing here is bad: Strong Guy is written reasonably well, Blob is in the "Goldilocks" villain range for this kind of story (not too weak, not too powerful, has a history with the series but is a novel-enough choice for antagonist), and the art is clean and easy to follow if largely unexciting. But there's also not a ton going on beyond the immediate entertainment of the slugfest. Which is fine. All series need issues like this occasionally; they're just not really the richest in terms of analysis.