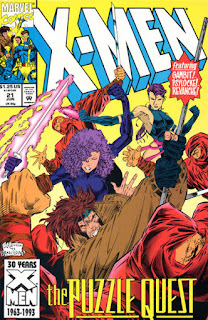 In a Nutshell
The X-Men head to Japan in search of the truth about Psylocke.

Plot
The X-Men interrogate the two Psylockes, and when both telepathy and Wolverine's senses fail to determine which is the real deal, Xavier declares the team must go to Japan to find Lord Nyoirin to learn the truth. In Alaska, Cyclops reunites with his grandparents, while in Seattle, the Dark Riders target Mesmero, killing him for being unworthy before executing one of their own sickly teammates. In Japan, Lord Nyoirin meets with Shinboi Shaw, and agrees to use Kwannon to kill the X-Men in exchange for Shinobi supporting Nyoirin's claim on Clan Yashida's holdings. Elsewhere, Gambit, Beast and the two Psylockes infiltrate Nyoirin's ancestral home. Taking out his guards, they discover a secret painting of Kwannon, resembling Asian Psylocke, in Nyoirin's study. In Tokyo, Shinobi attacks Matsu'o, angry that Matsu'o has prevailed on Gamesmaster to block Shinboi's efforts to kill Psylocke. In Nyoirin's study, the suspicions of the X-Men grow, but as they question Psylocke, they're attacked from behind by Silver Samurai, who declares that in order to regain the place of honor lost to Clan Yashida, he must kill them all.

Firsts and Other Notables
The Dark Riders, last seen nearly killing Apocalypse in "X-Cutioner's Song", return in this issue, and in the absence of both Apocalypse & Stryfe as leaders, they've apparently taken up Apocalypse's "only the strong can survive" tenet and begun targeting mutants for testing (basically, attacking and, if possible, killing them, in order to cull the weak from the strong). Here, their victim is Mesmero, last seen (in the X-books) in Excalibur #32-34, and he is ultimately killed, another victim of the early 90s purge of classic (if underused) villains (though like many others, he'll be back eventually). 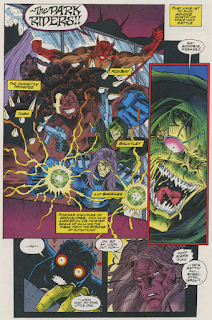 The Dark Riders also turn on one of their own, Psynapse, who has been weak and sick since the Dark Riders' return from the moon in "X-Cutioner's Song" (that last bit meant to illustrate that he is infected with the Legacy Virus). 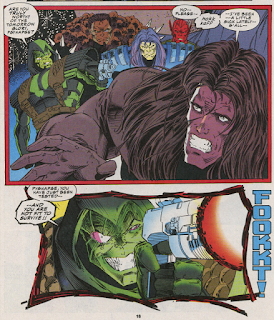 We're in Japan for this story, so we've got to cram in as many Japanese/Asian characters as possible. First, there's Shinobi Shaw, who is on hand in an effort to kill Psylocke as part of the Upstarts competition.

He is blocked by Matsu'o, who convinces the Gamesmaster (off panel) to block Shinobi's efforts in favor of Matsu'o's own plans for Psylocke (he was, recall, the one chiefly responsible for her Asian transformation). Frustratingly/hilariously, it's often hard to tell Matsu'o & Shinobi apart, and there's little indication of Matsu'o's false hand. 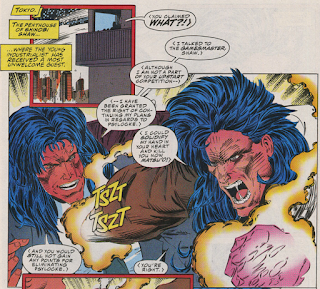 Lord Nyoirin is of course around, and forms an alliance with Shinobi in an effort to take control of the Clan Yashida (previously led by the now-deceased Mariko) resources.

Finally, the issue ends with the cliffhanger reveal of Silver Samurai attacking Beast from behind, his presence hardly a surprise given the setting and references to Yashida family interests.

Appearing in person (and not behind the scenes/being talked about) for the first time since Scott's wedding to Madelyne in Uncanny X-Men #175, Cyclop's grandparents pop up as he arrives in Alaska. We also get a sense of the "story" the X-Men apparently told "outsiders" about the fate of Madelyne, as well as Nathan Christopher, as they mention not seeing Cyclops much since both died, and he responds that it's time they learned the truth (PS I love Cyclops' X-branded duffle bag. I want one). 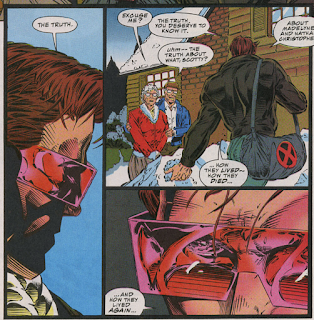 Creator Central
Brandon Petersen is still hanging around the X-office, and fills in on this issue.

A Work in Progress
While narratively-convenient, it's nevertheless appreciated that the idea of Xavier (or Jean) using telepathy to suss out the truth about Pyslocke is raised, and then shot down. 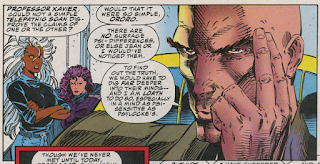 Also, Revanche notes that she's never met Xavier in person, which would be true for pre-Asian Psylocke, as he was in space when she joined the team and wouldn't have met him until Uncanny #275, after her transformation.

Psylocke suggests that her history of being manipulated and transformed against her will by outside parties (Slaymaster, Mojo, Matsu'o) are the reason she uses her powers more aggressively (ie the psychic knife). 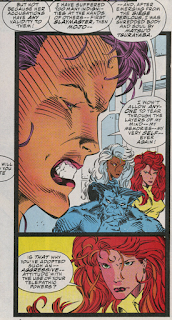 After shedding her Psylocke armor, we see the purple hued body suit (with various 90s straps) which will serve as Revanche's default look going forward.

Revanche says that she was a captive of Lord Nyorin for months, to explain her knowledge of his home, though readers already know this to be a lie, as we saw the pair interact in issues #17 and #18 in a way that wasn't captor/captive. 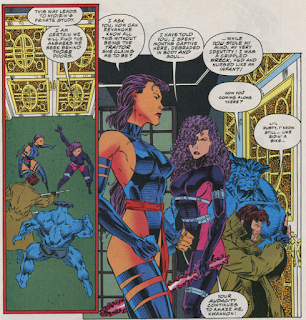 The Best There is at What He Does
Wolverine does the old "two claws on either side of a person's head, threatening to extend the middle claw" routine with Psylocke to open the issue. 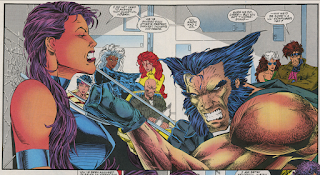 It's also noted that Wolverine stays behind while Gambit, Beast and the Psylockes journey to Japan, as it contains too many raw memories at this point (a reference to Mariko's death). 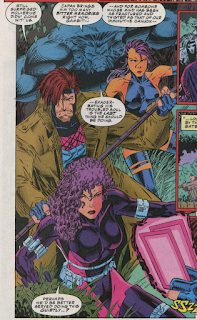 It's in the Mail
A response to a letter in this issue teases an upcoming Longshot miniseries (which never comes to fruition) as well as the upcoming Gambit mini. The letters works in a very 90s "NOT!".

Austin's Analysis
In the wake of last issue's Psylocke/Revanche cliffhanger, this issue properly begins Nicieza's exploration of Psylocke's transformation (and his ultimate failed retcon of such) by sending a contingent of the team to Japan alongside the Psylockes. Most of this is setup: introducing the extended players, teasing out the mystery further, but it's unfortunately let down by the art. Brandon Petersen, fresh off his short run on Uncanny (where his work was mostly solid, if rarely all that exciting), seems sloppy here - whether that's because this was a rushed last minute fill-in for Kubert or the result of Dan Panosian's inks is hard to say - and the end result does the story no favors.

The art in a scene in which Psylocke & Revanche are meant to be mirroring each others' fighting styles, for example, one of the key "advancing the mystery bits" in this issue, does little to show that idea; only through Beast & Gambit's dialogue does that become clear. There's also a problem with the fact that Shinboi Shaw and Matsu'o, as rendered by Petersen & Panosian, look nearly identical, which is especially problematic on the page in which they fight face-to-face (thankfully, one of them - Matsu'o, I believe - has a facial scar to distinguish between them). Fortunately, much of the identity issues that come into in this story are held for later issues, minimizing the possible confusion caused by the lackluster art here, but this issue nevertheless causes the story to limp right out of the gate.

Next Issue
Tomorrow, X-Force takes the fight to the X-Ternals in X-Force #23. Friday, the return to "Days of Future Past" in Excalibur #66. Next week, X-Men Unlimited #1.