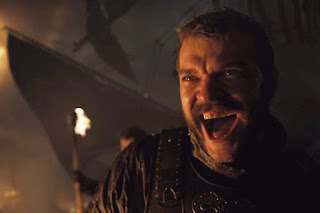 Dragonstone
We start this episode in Dragonstone where Daenerys and Tyrion are finally talking! Since taking over Westeros with dragons would be too easy and narratively unsatisfying Daenerys wants to defeat Cersei...more cleanly?

To be fair, burning down everything wouldn't lead to a fun land to rule over. Lady Tyrell isn't buying that, though. Peasants loved Margaery but she still died. So, maybe a few peasant being burnt wouldn't be all that bad? In the end, Daenerys wants to be a responsible leader and keep innocent casualties to a minimum. Despite my sarcasm, I do agree. It is nice not to kill innocents.

Beyond that, Daenerys also grilled Varys on his shifting loyalties. Varys pretty much says that he's loyal to Westeros and will be loyal to her so long as she's a good queen. Daenerys excepts this on the condition that Varys let's her know if she's being a bad queen. They agree. Of course, neither of them think of the scenario of Daenerys being a bad queen in such a way that Varys fears repercussions for speaking up against her and thus plots against her in secrecy. But I did!

Anyway, the war plan is for the Tyrells and Dorne to lay siege to King's Landing because they believe the Lords won't rush to defend Cersei from local Westerosi armies. Meanwhile, the foreign armies of the Unsullied and Dothraki attack Casterly Rock. Everyone is amenable to this plan so Yara takes Ellaria Sand and the Sand Snakes back to Dorne to gather their army. What could possibly go wrong?

Beyond everything else, Melisandre shows up in Dragonstone with tales of the King of the North. Daenerys wants to meet Jon Snow so he can swear allegiance to her. We'll see how that goes. There's also talk of the prophecy regarding the promised prince but Missandei uses her mad translation skills to note that word "prince" in the prophecy, in High Valeryan, could refer to a man or a woman. Prince was fairly androgynous. Any talk of the color purple in that prophecy?

Anyway, Missandei and Grey Worm get it on. Well, Grey Worm lacks certain equipment, but he makes up with it with his tongue. Go Grey Worm!

King's Landing
Cersei is trying to rally support from the other lords (I believe). She is talking about the disaster that would be Queen Daenerys. What, with her evil "foreign" army coming to take the jobs of honest, hard working Westerosi. They must fight this foreign menace! Hey, keep your politics out of this show about....politics...

Afterwards, Jaime tries to convince Randyll Tarly (who is apparently quite the general) to join the Lannisters. However, Randyll swore an oath to the Tyrells. But Jaime spews some more foreign menace propaganda and I think Randyll is considering breaking his oath.

Of course, all this troop rallying and strategizing is for naught, since Daenerys has dragons. But Qyburn has burn working on that particular problem...and he's got an answer!

Qyburn takes Cersei deep within the bowels of the Red Keep to show her his secret weapon. And that weapons is.........a big crossbow. Weak.

So Sam does some research and finds a procedure that could help! But, Achmaester Ebrose says it's too dangerous. We know where this is all headed. Super secret, super painful surgery for Jorah.

Arya stops by the tavern he works at Hot Pie notifies her that she's WAY behind on her Game of Thrones. He doesn't even worry about spoilers when he straight up tells Arya that Jon Snow won the Battle of the Bastards and took back Winterfell! Not cool.

Upon hearing that her home can be a home again Arya is left with a choice. Either continue on the path to revenge, or head North. She chooses North and, on the way, meets up with Nymeria briefly. (Her Direwolf, not the Sand.)

On The Sea
Speaking of Nymeria Sand, she's on a boat with her sister Sand Snakes. Theon is there. Yara is flirting with Ellaria Sand. Everyone is in a pretty good mood so you know shits about to go down.

And shit certainly goes down.

Euron's navy show up and seemingly decimates Yara's navy. It was dark and tough to tell how much got destroyed. But Euron did board Yara's ship and killed Obara and Nymeria in short order. I guess strong, badass women are no hope against a man. Of course, I don't even know how strong or badass they were. We barely saw them do anything. It's almost like they were introduced without any real plans for the characters. But I digress.

Yara gets held hostage by Euron and Theon is left to do...something. But either he freaks out or simply doesn't know what to do or has some plan I'm not privy to but his decided course of actions is to just to jump overboard. So, in the end, Yara, Ellaria and Tyene are kidnapped.

We all knew it wasn't going to be easy for Daenerys...

I feel like Daenerys' questioning of Varys should've occurred sooner. Like maybe when they were sailing to Dragonstone?

Daenerys was in a forgiving mood so she forgave Melisandre for backing Stannis Baratheon. But...what will happen when Daenerys finds out about Melisandre's other transgressions?

So, how did Jorah get locked up in the Citadel before being examined?

When Hot Pie called Arya very pretty, it somehow came off as completely genuine without a hint creeper.

Does Littlefinger ever sit at meetings?

Euron being the first to board a ship seems unwise for a leader.

The battle aboard the boats was very confusing. I just assume Euron was winning because I know how this show works.

Also, what the hell Yara, Theon the Ironborn navy? Did you not think you weren't going to get into a naval battle eventually? Why'd you go down so easily? The battle was almost over before it began. Frankly, it's a good think Euron took them down now before Daenerys had to truly rely on them.

Tyrion: Conquering Westeros would be easy for you. But you're not here to be Queen of the Ashes.
Daenerys: No.

Littlefinder: I love Sansa...as I loved her mother.
Jon Snow: Touch my sister and I'll kill you myself!