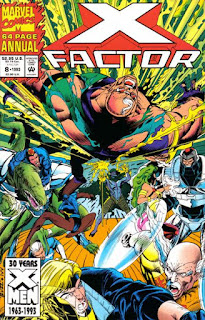 In a Nutshell
The Chalkers return as part of Charon's first appearance.

Plot
Leaving a movie with his parents, Charlie Ronalds is devastated when his parents are killed by an attacker who says he is a mutant. Years later, Charlie is injured during an accident at his school involving Guido Carosella, another mutant. In the present, Guido, along with Polaris, appear on a talk show while the rest of X-Factor trains in the Danger Room. Charlie, his hatred for mutants and Guido in particular still raging, contacts a demon named Cloot. Learning of Charlie's hatred for X-Factor, Cloot grants him powers, and allies in the Chalker family, in exchange for Charlie delivering the souls of X-Factor to Cloot. As Charon, Charlie leads the Chalkers in an attack on X-Factor, but the Chalkers quickly die once more as Charon battles Strong Guy, and when he declares he simply wants Strong Guy to die, Cloot appears, telling Charlie he's broken their deal and sending Charlie to the same hell dimension where his parents reside, leaving X-Factor confused about what exactly has just happened.

2nd Story: Val reviews X-Factor's personnel files, and when she's finished, she's confidant she can put the information to very good use.

3rd Story: Strong Guy arrives on the scene of a subway crash, hoping to rescue some survivors, but everyone is already dead, save for a small puppy whom he brings to the surface. Outside, both the gathered crowd and emergency personnel give him a hard time for failing to save anyone, appearing insensitive, and being a mutant. He leaves, feeling low, but the puppy tries to cheer him up.

Firsts and Other Notables
The sensational character find of 1993/trading card recipient for this annual is Charon, real name Charlie Ronalds, a one-time classmate of Strong Guy whose parents were killed by a mutant, instilling in him a hatred of mutants that was exacerbated when he was injured in the same accident during which Strong Guy's powers manifested. As an adult, he makes a deal with a devil, gaining mystical abilities in exchange for attacking X-Factor and sending their souls to the demon (hence the name Charon, the ferry man of the dead from Greek mythology). This marks the only appearance of Charon to date. 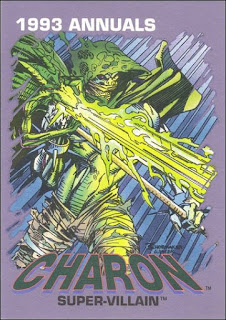 The demon who gives Charon his powers is Cloot. He references a past encounter with the Hulk, which means Cloot is actually Satanish, one of Marvel's more notable demonic characters (who is not Mephisto), as in that Hulk story, Cloot ultimately tells Hulk he is Satanish. 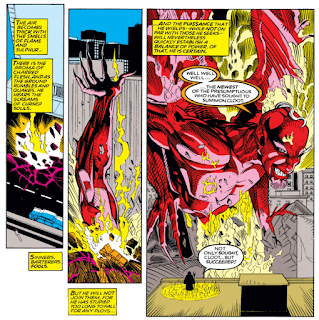 Assisting Charon in his attack on X-Factor are the Chalkers, whose souls ended up in Cloot's realm after their death, burning with hatred for X-Factor. He resurrects them, but they proceed to be killed again pretty quickly (and equally ignominiously). This marks the payoff to the various Chalker family scenes that Peter David sprinkled throughout his run, with all of those scenes building to the gag that X-Factor's greatest enemies are three people they've never heard of or met before.

Cloot says that he wants X-Factor's souls because a conflict is brewing amongst the various Hell lords; David will later depict such a conflict in his return to X-Factor, though it's unclear if that was based off whatever he was planning here, or just a coincidence of a writer returning to an underdeveloped but still intriguing idea twenty years later.

Though it goes unstated, Random is obviously the mutant who kills Charlie's parents. Nothing really comes of this (it just seems like a way for David to tie together the history of two new characters), aside from the fact that later stories will establish that Random is significantly younger than he appears, making it hard for him to have executed Charlie's parents since Charlie has grown into adulthood by the present day setting of the story. 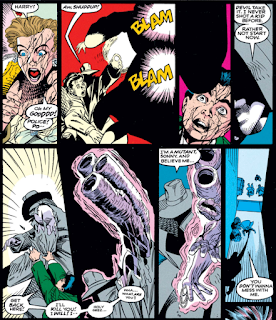 X-Factor's Danger Room returns, though it is once again played mostly for laughs, with the gag here being that due to budget cuts, there's no money for anything fancy, so it's just Val shooting at the team.

Cloot makes a joke about political correctness being a demonic invention; I'd love to be able to put that under the "Grim 'n' Gritty 90s" heading, but America just elected a president in part because some white people are mad they can't use the N-word, so sadly, ragging on the notion that some names and terms are more racially or sexually loaded/inappropriate than others is still a thing today just as it was in the 90s. 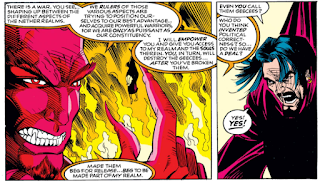 The second story in this annual is essentially a biographical feature on the members of the teams, presented as Val cross-checking their files. Items of note include: it's mentioned that Polaris was part of the group searching for the X-Men alongside Forge & Banshee during the "Dissolution" era, which isn't quite true (she was more or less a captive of the Shadow King the whole time), and that Polaris joined X-Factor at Xavier's request, something we never saw on-panel. 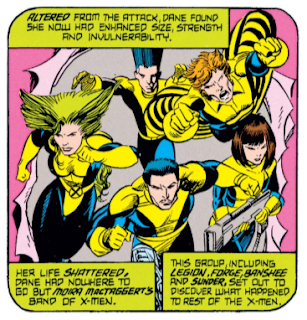 Strong Guy joined because he was "intrigued" by X-Factor, and his portion of the recap is hilariously short (four panels, filling one half page), a testament to the fact that while he appeared before the relaunch, it's really in this series that he became any kind of character, 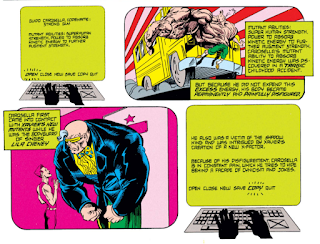 Information on Havok's time with the Outback Era X-Men is said to be unavailable, possibly an acknowledgement of the fact that the X-Men were impervious to being recorded at that time.

The story of Madrox' power manifesting when the doctor spanked him after he was born is credited to Madrox himself, which may be an attempt to reconcile the fact that most mutants' powers don't appear until adolescent (the idea being that Madrox just made up that story), and it's said he joined the team seeking some kind of order in his life. 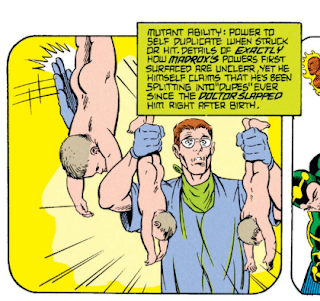 At the end, Val is depicted as being nefariously pleased with the information she's gained, most likely another nod at the "Evil Val" subplot. 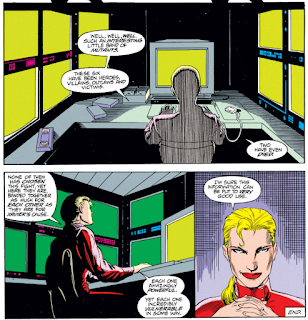 The third story in the annual involves Strong Guy trying to rescue people from a crashed subway, but they're all dead when he arrives, save for a puppy he manages to save. There's some business about the crowd being mad because he couldn't save anyone and/or blaming mutants for the accident, and it's overall pretty sad. 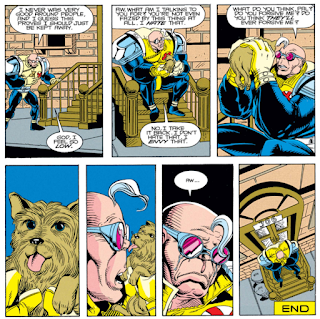 Creator Central
Presumably written before his departure from the series, this marks Peter David's final contribution to this iteration of X-Factor (before he returns to relaunch the series in the 00s). He is joined by Terry Shoemaker, making this the third X-Factor annual drawn by Shoemaker (in addition to #3 and #6).

The Chronology Corner
This issue takes place between issues #91 and #92 of the regular series.

A Work in Progress
In the course of detailing Charlie's origin, the events surrounding the manifestation of Strong Guy's power is revisited, specifically the incident involving young Guido being hit by a bus and his body deforming as it absorbs the kinetic energy from the hit. 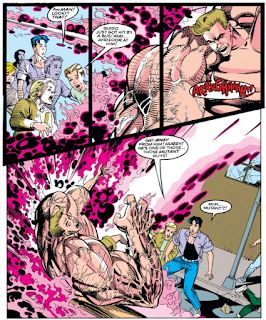 Returning to the running gag, a talk show hosts gets X-Factor confused with X-Force.

Wolfsbane later asks if the Chalkers have them confused with X-Force, because everyone else does. 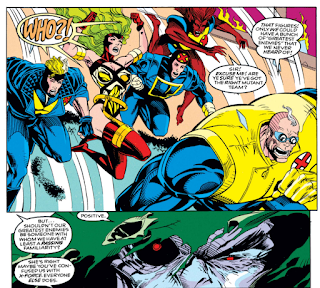 And Strong Guy notes they're the only team without any action figures (though in the real world, at this point in time Strong Guy at least had a figure). 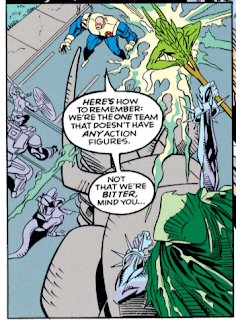 Quicksilver declares that upon learning #1 Fan's name, "Strong Guy" is no longer the stupidest name he's ever heard.

The Chalkers die again almost as stupidly as they did the first time, with #1 Fan attempting to catch a falling Vic Chalker, once more forgetting his hands are now giant whirling fans. This leads to Vic getting sliced into pieces, and one of the lasers on his suit cutting #1 Fan in half. 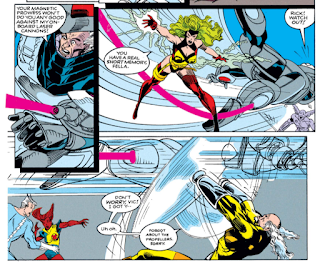 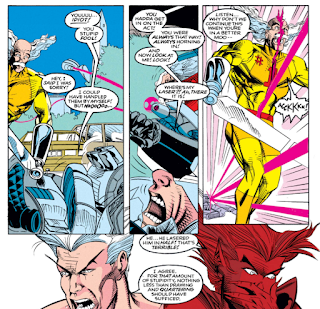 Meanwhile, Carnosaur is killed when he chomps down on Madrox' arm, which allows Madrox to generate a dupe from inside Carnosaur, exploding him. 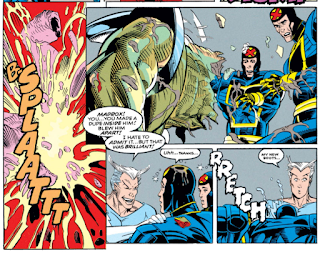 Quickly taken out of the fight with Charon and stuck hanging from Charon's "boat", Havok hopes his brother can't see him.

The Reference Section
Much of Charon's origin is lifted from Batman's, with his parents being murdered in front of his eyes after leaving a movie, only here the killer is a mutant and this sparks a lifelong hatred of mutants in Charon, instead of a lifelong hatred of crime.

Rahne is seen reading a book called Howling Mad (which she says should be turned into a movie); it is a book written by Peter David, published in 1989. 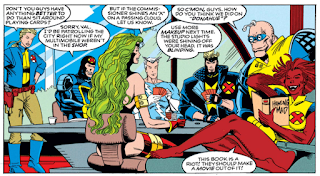 The Grim 'n' Gritty 90s
To tie a bow on the Charon/Batman parallels, the movie Charlie and his parents are leaving before they're killed is the '66 Batman movie. Charlie proceeds to make a crack about how it'd be impossible to have a Batman movie without Robin, a wink at the fact that it seemed hard to image Robin (especially the campy version portrayed by Burt Ward) working in the then-contemporaneous grim-and-gritty Tim Burton Batman films, with this issue coming out a couple years before Robin's cinematic re-introduction in Batman Forever. 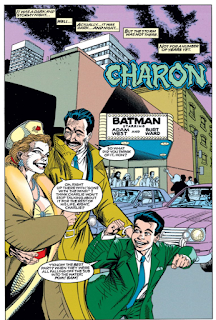 The talk show Guido & Polaris appear on to discuss mutant rights is hosted by Phil Donahue.

Austin's Analysis
Let's get this out of the way: the resolution to the various Chalker bits that ran through Peter David's run is genuinely funny. The idea that X-Factor's greatest nemeses are a bunch of hapless guys they've never heard of is totally appropriate for this team, and also fits in with the running gag of nobody knowing who X-Factor is (or confusing them with X-Force). That said, I'm not entirely convinced that the resolution to the Chalker bits is all that satisfying. David didn't exactly devote a ton of page time to them, but he did drag the plot out over more than a years' worth of issues. Having the payoff amount to a couple pages' worth of a (granted, funny) gag is somewhat underwhelming.

Of course, it probably doesn't help that the payoff comes in this annual. As one of Marvel's "introduce a new character!" cash-grab-for-the-speculator-market annuals, David is forced to introduce a new character (because the Chalkers all previously existed), which puts the Chalkers into second fiddle territory. And it doesn't help that said new creation, Charon, doesn't exactly light the world on fire (making him of a piece with most of the other '93 annual creations). Inserting a villain into Strong Guy's past is fine - the character's pre-X-Factor history is small, as hilariously documented by the four panels devoted to it in the second story - but Charon ultimately comes out pretty generically, with his hatred of mutants motivated by a twisted take on Batman's origin being the most interesting thing about him. The demonic angle doesn't help, either, as doesn't really tie-in thematically or historically with either Strong Guy specifically or X-Factor in general, coming across instead like a cheap and easy way to power-up the requisite new character and bring back the Chalkers (which seems to be what David is most interested in).

It's certainly nice to see Shoemaker's unexciting but solid art again (I definitely like it more now than when I was a kid), and the Chalker stuff is legitimately funny, but it's hard not to escape the paradox at the center of this story: Charon feels underdeveloped and little more than a vehicle to pay off the Chalker gag, yet the Chalker gag feels overshadowed by the amount of page-time devoted to setting up Charon.