Game of Thrones 7x04: The Spoils of War 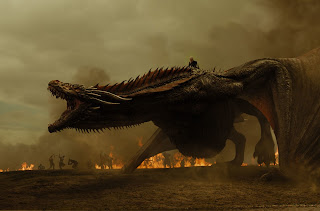 Winterfell
We start with Wun Wun sitting in a wheel chair. Finally! Wun Wun is independently mobile. Littlefinger skulks into the room and hands Wun Wun the knife used to killed Bran because he, of course, thinks Wun Wun is Bran too.

I think this is some kind of power play by Petyr but it doesn't work. Wun Wun is completely disaffected and simply tells Littlefinger that "chaos is a ladder." This unnerves Baelish. My sources say that that's a phrase Littlefinger told Varys in private earlier in the series. I think Littlefinger has no clue how handle someone he can't keep secrets from and can't play mind games with.

Meanwhile, Arya saunters up to the gates of Winterfell and two guards blunder their way through not letting her in (believing the idea that she is Arya Stark is too far fetched). While these two work on their three....er....two stooges routine, Arya up and sneaks by them.

This eventually ends up with reunion between Sansa and Arya. They're happy to see each other. It's sweet. That leads to Sansa, Arya and Wun Wun reuniting. It's...not as sweet. Wun Wun just, totally doesn't care about anyone anymore. He gives Arya that sweet Valyrian steel dagger though.

Anyway, Arya wants a go at Brienne. Brienne goes easy on Arya to start but we know how that works out. Eventually Arya pisses off Brienne and it's on like a 1980's ape based video game. The match ends in a draw and that's cool and all but it feels like if I was shooting hoops in my driveway and some dude walks up saying he's rusty and would like to get some practice in and then throws down a 360-tomahawk jam over me. I mean, that's sweet but I'm starting to think their intent wasn't to brush up on fundamentals.

King's Landing
Cersei is bragging to the Iron Bank's representative, Tycho, about the spoils of Highgarden. The Iron Bank seems satisfied and ready to back Cersei. Despite the newfound money, I'm still not sure it's a wise bet. As we'll soon find out.

Dragonstone
Jon Snow invites Daenerys into a cave. We all know Jon Snow's history with women and caves so I wasn't sure what to expect! Unfortunately, it was just to show Daenerys the giant deposit of dragonglass and carvings made by the Children of the Forest. The carvings show the First Men and the Children of the Forest fighting the White Walkers together. It's supposed to be symbolism for Daenerys' army and the North coming together. It may also change the mythos of Westeros but I don't know much about that.

After Daenerys and Jon leave that cave Daenerys is informed of the relatively bad news. Casterly Rock was taken but the navy was wiped out and High Garden was taken as well. Daenerys is distraught and wants to burn them all. Tyrion advises against it. Daenerys, frustrated, asks Jon Snow what she should do. He pretty much just says burning innocent people won't garner their support. I could've told her that.

Later, Theon and the remaining Yara fleet arrive back at Dragonstone. Theon and Jon Snow meet for the first time in a while. At first I was trying to think of what Jon Snow knew exactly but then I remembered Jon Snow has been around Sansa for a while so she probably told him everything. And so, while Jon Snow wanted to kill Theon he doesn't because of what he did for Sansa.

On the Road
The Lannister army is marching back to King's Landing. The spoils of war is sent on ahead while Jaime settles up with Bronn after having a good laugh at a man named Dickon. Dickon talks a little bit about the horrors of war.

Bronn talks of wanting a castle when a Jurassic Park-esque rumbling occurs. It's presumably an army on the move. Bronn tells Jaime to go back to King's Landing but Jaime's too much of a hero to leave. Pretty soon the Dothraki army can be seen riding towards the Lannisters. Jaime thinks they can take them. I personally don't. But then Daenerys riding a dragon comes flying overhead and now everyone is on the same page that the Lannister army is screwed.

There's a few shots of the horrors of war but, I dunno, these soldiers are just coming back from slaughtering the Tyrell army. Maybe these Lannister soldiers are just good people following orders but then again, so are the Dothraki. What goes around comes around.

Bronn and Jaime keep managing to avoid being flambéed since they're main characters. I get some enjoyment out of the characters but, at the end of the day, they're both evil so I really wouldn't mind seeing them get their comeuppance either. Bronn eventually makes it to the Giant Crossbow and has Drogon in his sites.

The first shot misses but then Bronn connects with the second. It hurt the dragon but not mortally. Drogon is pissed and blows the Giant Crossbow away. So, that went well. Good show, Qyburn, real good show. Frankly, this is the best case scenario for Daenerys. Now she's aware of the Giant Crossbows and she didn't have to lose any dragons in the process.

So Drogan lands and Daenerys attempts to pull the giant bolt from Drogon when Jaime sees her. He decides a wise course of action is, of course, to be the hero. So he grabs a lance and rides at Daenerys. Naturally Drogon will have none of this but, just before Jaime is flash fried, someone, probably Bronn, saves Jaime by pushing him off his horse and out of the flames' way.

Other Thoughts
So Daenerys decides to throw caution to the wind and takes her dragon into battle. It went well for her and she used her dragon without innocents dying. I think that's good, right? But did Jon Snow's advice help devise this "brilliant" plan at all?

So Cersei is going to pay back her loan to the Iron Bank only to take out another loan.

Bran should know who is responsible for sending the assassin after him, right?

Daenerys said she has lost Dorne but she only lost Ellaria and the Sand Snakes. What is going on in Dorne right now? Who is in charge? I would think Dorne would be pretty pissed that Cersei kidnapped Ellaria. They'd probably want to still team up with Daenerys.

Tyrion isn't a field general nor a fighter. Why was he so close to the battle field? He was put into harm's way for no reason.

I was sure Daenerys was going to lose a dragon this episode. It didn't happen this episode but we all know they're not all getting through the series.

So what are the odds that Jaime has drowned in the water?

Davos: What do you think of her?
Jon Snow: Who?
Davos: I believe you know of whom I speak.
Jon Snow: I think she has a good heart.
Davos: A good heart? I've noticed you staring at her 'good heart'.

Arya: They say you killed Joffrey. Did you?
Sansa: I wish I had.
Arya: Me too.