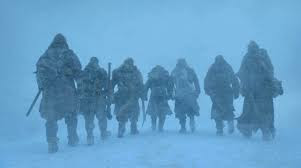 On The Road
Shockingly, Jaime's alive! Just kidding. We all knew he'd survive.

So, Bronn helps Jaime out of the water and they're apparently far enough away that Daenerys' army as to not get caught. Jaime is in shock. He says they just got their ass kicked by one dragon and she's got three of them! They're screwed!

Bronn corrects Jaime and notes that only Jaime and the Lannisters are screwed. Fighting dragons is where Bronn's service ends.

Daenerys stands in front of the remaining Lannister army. Apparently her voice projects really well because everyone can hear her. She demands that they all “bend a knee” and swear fealty to her. Her dragon aids in her persuasion.

Most of the army is on board with kneeling instead of getting fried. However, Randyll and Dickon Tarly refuse to kneel out of a mixture of pride, loyalty and xenophobia. Tyrion suggests locking them up but they get melted by dragon fire instead. I guess Sam is the head of the household now.

I think this is supposed to show Daenerys is leaning harder to the dark side but I don't know if I see it. Her enemies had a choice, join or die. She can't let them live to fight another day and I'm not sure what imprisoning them will accomplish. Then again, titles, pedigrees and nobility never impress me much. So, they died. Daenerys already killed a bunch people in the battle. What's two more?

Winterfell
Wun Wun is having a vision or warging or something to see what's going on North of the Wall. Although, what he sees is something everyone already knows, the White Walkers are marching and have a big army. But he still wants to notify everyone else of this despite the fact they've already been told it before.

Meanwhile, a couple of Lords are thinking Sansa should've been ruler of the North. I guess they're impatient with Jon Snow's absence. Then again, he put Sansa in charge so I'm not sure what they're complaining about? Regardless, Sansa reasserts that Jon Snow is still King of the North.

Arya spies on Littefinger because why wouldn't you spy on him if you could? Littlefinger is given a suspicious note. After Littlefinger hides it and then leaves Arya finds the note. It's a note I believe Sansa was forced to write saying that Joffrey ordering the execution of Ned Stark was necessary and asking the Starks to accept Joffrey's rule. I'm not sure what Arya thinks of that but I'd hope she'd realize that A) That was long ago and B) Sansa was probably forced to write it. But, we'll see if this causes discord.

Oh, and Littlefinger plotted to have Arya find the note because of course he did.

Dragonstone
Jon Snow is out wondering about. He's probably deep in thought, wondering what he should do with life. Daenerys comes riding in on Drogon and guess what? Drogon let's Jon Snow pet him. Probably because of Jon Snow's Targaryen blood. Then Jorah shows up. That was fast.

Tyrion and Varys discuss the frying of nobles. They both kind of agree it was excessive and, again, I'm just not 100% on board with that. It's war. She just fried a bunch of soldiers. Why are these two guys that much more important? Break the wheel.

Wun Wun's raven reaches Dragonstone and apparently Daenerys is suddenly going to take the threat more seriously. However, she doesn't want to commit to battling the White Walkers because Cersei would, presumably, take out any armies Daenerys left behind and take back all of Westeros. So, they need a plan.

Beyond that fact that I don't think Cersei is the type to suddenly cooperate for the greater good (nor is she trustworthy enough to team up with), I'm just not excited to see the plan work. I don't want to see Cersei join Jon Snow and Daenerys. I want her to get her comeuppance.

Oldtown
Wun Wun's raven reaches the Citadel. Archmaester Ebrose doesn't pay it much attention but Sam notifies him that Wun Wun can't walk but somehow survived a year (years?) north of the wall so he might know a few things. But the next fuck Archmaester Ebrose has to give will be his first.

Sam is copying more text while Gilly is about to impart some interesting and possibly important knowledge on him. But Sam decides to mansplain to Gilly about all the important things Sam should be doing but instead of transcribing text. Sam gets so fed up he flees the Citadel with Gilly and her child and the knowledge Gilly was about to impart is gone...possibly forever.

King's Landing
Jaime is back in King's Landing and tells Cersei that they're screwed. Three dragons is three times the number of dragons they already can't handle. Cersei is still confident that the Lannisters can take on anything. We'll see.

Tyrion and Davos arrive in King's landing via Davos' smuggling route. Meanwhile, Bronn is taking Jaime to the bowels of the Red Keep under the guise of sword training. Instead of training, Tyrion is there to meet with Jaime. The meeting is tense but Jaime still has a soft spot of Tyrion. Tyrion asks for a meeting with Cersei.

Across town, Davos finds what he's looking for, Gendry! Gendry is smithing weapons for the Lannister army but is none-to-pleased about it. So, it doesn't take much for him to agree to leave with Davos.

Just as Davos and Gendry get to their boat they are spotted by a couple of guards. Davos tells them he's just smuggling some crab Viagra and then pays the guards off. They would've bought it too until Tyrion strolls up. They recognize Tyrion so they got hammered to death by Gendry for their troubles.

When Jaime next sees Cersei she, of course, already knew Jaime met with Tyrion. That might not be good news for Bronn. Jaime notifies Cersei that Tyrion did not kill Joffrey. But I don't know if Cersei doesn't believe it, doesn't want to believe it or simply doesn't really care. She does seem open to the idea of meeting with Daenerys. Probably because a ceasefire is in her interest and also because she's most likely plotting to betray Daenerys.

Oh, and Cersei is pregnant. Or so she claims.

Jon Snow, Jorah and Gendry are the ones tasked with nabbing a White Walker and arrive at Eastwatch with Davos. That was fast. Tormund is showing them around but thinks their plan is dumb. Don't we all.

Tormund directs the crew to a group of men that were captured trying to go north of the Wall. It's the Brotherhood without Banners, including the Hound. Jon recognizes the Hound but Gendry recognizes the rest of the Brotherhood as the people who sold him to Melisandre. Tormund notes that Jorah's father killed a bunch of Wildlings. What a mismatched, ragtag group of misfits!

We end with the Fellowship of the White Walkers journeying north of the of the Wall.

Other Thoughts
I think this the first time that Game of Thrones had people in two different locations in one episode. That really doesn't lend itself to the location-by-location breakdown treatment I give it.

I'm still confused why exactly Daenerys is on board with fighting the White Walkers now.

I was also hoping Arya would, at some point, up and kill Littlefinger.

Gendry's back! Honestly, I didn't really miss him or need him to be found. I am curious if he'll serve any greater purpose, though.

Good thing Jon Snow decided to steer clear of Winterfell before heading to Eastwatch. You wouldn't want to check on your people and hear important/interesting information from your brother. Or you know, even see him and the sister you haven't seen for years.

Davos: This is Gendry.
Tyrion: He'll do.

Davos: Nobody mind me. All I've ever done is lived to a ripe old age.

Jon Snow: He's right. We're all on the same side.
Gendry: How can we be?
Jon Snow: We're all breathing.