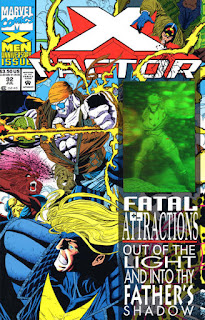 In a Nutshell
X-Factor battles the Acolytes

Plot
In the wake of an Acolyte attack on a hospice in Virgina, Havok, Quicksilver & Val Cooper interview one of the survivors, whose descriptions of the Acolytes' savagery stuns them. They are unknowingly watched by the Acolyte Scanner, who reports back to Cortez. Later, X-Factor interrogates Spoor, the one Acolyte captured during the attack. He is initially belligerent, but becomes reverential when Quicksilver, the son of Magneto, enters the room. Spoor proceeds to tell them the location of the Acolytes' next target, a low-level military base in Kentucky. But instead of bringing X-Factor, Val goes there only with Quicksilver, along with Random as hired help. Suspicious, the rest of X-Factor follows, and along the way they encounter a mysterious flying mutant who observes them briefly before flying off. At Camp Hayden, Quicksilver quickly learns the base is a front for Project: Wideawake, the government program to create Sentinels. Arriving shortly thereafter, X-Factor is stunned by the revelation. Just then, the Acolytes attack the base, and while they fight X-Factor, Cortez attempts to recruit Quicksilver. He rejects Cortez, who then calls for the Acolytes' retreat, saying they've succeeded in planting a seed. In the wake of their departure, Val coughs up green smoke, revealing she's been under the control of the Acolytes for the last several weeks. However, she says that she was just following the government's orders in keeping Project: Wideawake a secret from the team, and X-Factor walks away from her in disgust.

Firsts and Other Notables
This issue marks the beginning of "Fatal Attractions", the line's annual crossover for 1993 (and the first to include both Excalibur & Wolverine), which also functions as a celebration of the X-Men's 30th anniversary. However, it's structured a bit differently than usual crossovers. Each series only contributes one issue (albeit a double-sized one) to the storyline, and with the exception of the 4th and 5th chapters, each issue more or less stands on its own, without leading directly into the next chapter, and for the most part, the character stay contained within their own series, rather than spilling over into other books as the story goes along.

This also marks the end of Joe Quesada's brief run as the book's regular artist, ending after six issues. With one of those being a fill-in and two featuring shortened main stories, it's clear deadlines were an issue for the artist, making him not unlike far too many of the hot artists who came up during this time.

On his way out, he gets co-plotter credit on the issue alongside Scott Lobdell, with J.M DeMatteis coming onboard as scripter. Though Lobdell hangs around as a plotter through issue #95, DeMatteis is the book's new regular writer, and will remain on the series through issue #104. He is known for focusing on the psychological aspects of characters, as well as runs on Defenders, Spider-Man (he wrote, amongst other things, "Kraven's Last Hunt" and the death of Aunt May) and, over at DC, the "Bwa-ha-ha" era of Justice League, alongside Keith Giffen. This marks his first (and really, only) significant work for the X-office (he did write the Iceman limited series, though that was out of the Defenders office at the time).

This issue also marks the first appearance of Exodus. Though he appears only on a couple of pages and says nothing, he will go on to be one of the more significant and recurring X-villains for the next year or two, as he basically becomes a surrogate Magneto in the wake of events in "Fatal Attractions". He is about as 90s as they come, complete with a mysterious background (which eventually ties him to the Avengers Black Knight, Apocalypse, and the Crusades) and vaguely defined powers (specifically psionic in nature) that more or less let him do whatever the story requires. I have no idea why he's introduced here, without doing anything or being otherwise relevant to the story, unless Quesada designed the character and just wanted to get him into an issue he drew to stake an ownership claim. 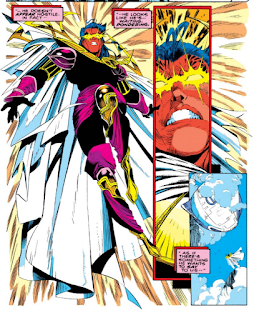 It's also revealed here that the garbage/tentacle monster which attacked Val at the end of issue #87 was sent by the Acolytes, and effectively put her under their control for the preceding five issues. She spits out the creature/slime/fog/whatever here, presumably because she accomplished what the Acolytes wanted by arranging a meeting with Quicksilver, thus ending the "Evil Val" subplot. However, due to her non-Acolyte-influenced secrecy involving Project: Wideawake, the issue ends with the team estranged from Val, setting the stage for the arrival of a new government liason (though Val will continue to appear in the series). 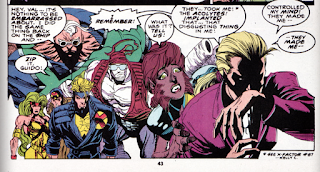 Project: Wideawake, the US governments response to the threat of mutants, first mentioned all the way back in the epilogue to "Days of Future Past", rears up again, as its revealed that the government has taken it upon itself to build it's own Sentinels (as opposed to subcontracting through something like Shaw Industries). Nothing of any immediate impact comes of this, aside from the vague notion that the government is stepping up its anti-mutant game. 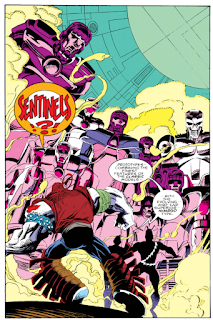 Senator Kelly is on hand at Camp Hayden, though it's tough to get a read on whether or not this is the more moderate Kelly from Uncanny #299 (aside from, you know, hanging out with Sentinels). 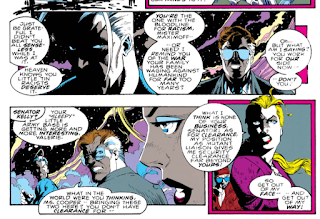 The Acolyte Mellencamp (the big lizard guy) is killed by Madrox this issue, as he pulls the same trick he did in X-Factor Annual #8 by generating a dupe while his hand is inside Mellencamp's mouth, causing the villain to explode. It's a much more grisly scene here (Mellencamp was also trying to gouge out Madrox' eyes at the time), and his death will weigh more heavily on Madrox going forward than Carnosaur's did (presumably because Carnosaur was already dead, and had just been resurrected by a demon). 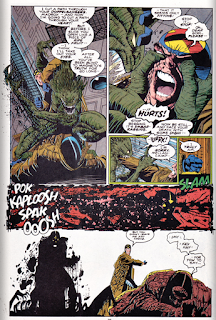 The Acolyte Spoor (one of Cortez' honor guard) is captured in this issue; he will eventually be transferred to Moira's facility on Muir Island and appear in Excalibur. 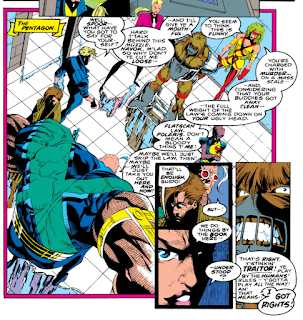 Left behind by Val, X-Factor follows her using a ship designed by Forge that travels via Polaris' magnetic powers. I don't believe the ship every appears again, but the team's connection to Forge gets reinforced soon. 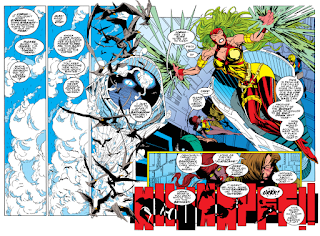 90s gimmick covers continue to evolve; this issue (as with all chapters of the crossover) has a cardstock wraparound cover, along with one of the 90s' biggest obsessions, a hologram, featuring a character from the series (here, it's Havok, though it seems like Quicksilver would have been a better choice given his role in the story). This is also a double-sized issue, and of course, the price is higher than a regular issue (more than double, $3.50 vs $1.25). 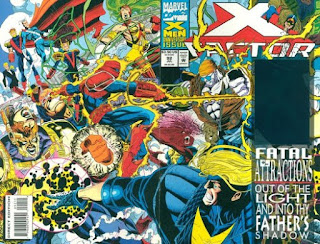 Creator Central
This issue's letter page corrects the art credit from the previous issue, citing Jan Duursema as the penciler, and not Quesada.

A Work in Progress
Since fleeing the French castle in Uncanny #300, the Acolytes are now operating out of the remains of the Leningrad, the sub Magneto destroyed in Uncanny #150 (presumably it sank back into the ocean after he raised it in X-Men #3, and the Acolytes somehow made it livable).

Even before killing Mellencamp, Madrox is notably morose, something that will continue (and get worse) over the next eight issues.

This issue establishes that the Acolytes view Quicksilver with some reverence, being the son of Magneto, despite his rather public disavowal of Magneto's villainous actions.

Random returns, hired by Val to accompany her and Quicksilver to Camp Hayden (though I suspect Quesada just wanted to draw the character again). 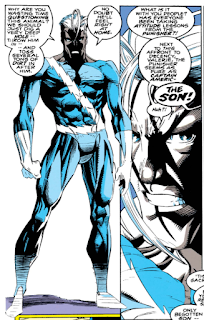 Guido compares Spoor's reaction to Quicksilver to Sharon Stone walking into the room.

Artistic Achievements
The nurse being interviewed by X-Factor at the start of the issue was attacked by Senyaka, and the way his whips left scars on her neck and face has always stuck with me (for being really gross and frightening). 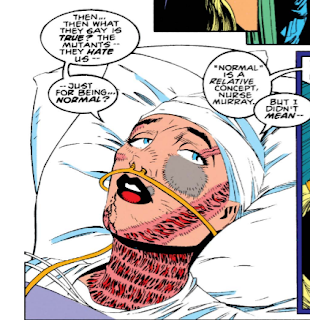 Later, Quesada turns in a fun two-page spread of the Acolytes spilling out into Camp Hayden to attack X-Factor. 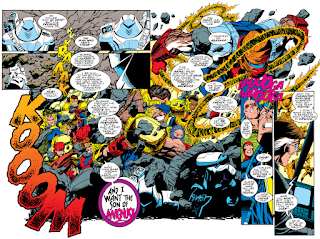 Human/Mutant Relations
Wolfsbane saves Senator Kelly from an attack on Frenzy, saying she hopes her actions will cause him to rethink his stance on mutants, but threatening to come after him if it doesn't. 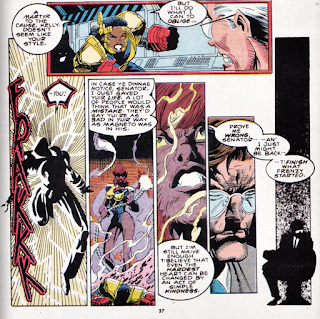 The blatant hypocrisy of the Acolytes carrying out genetic cleansing in the name of a man who survived the Holocaust is pointed out. 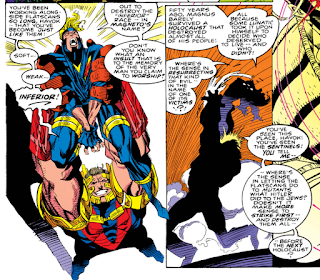 Val plays the "I was only following orders" card, as well as the "but you're my friends" card, when confronted by X-Factor for keeping Project: Wideawake a secret, but neither goes over terribly well. 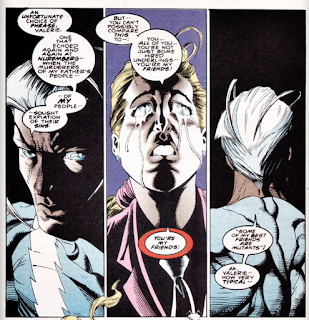 Austin's Analysis
Even within the context of the relatively atypical "Fatal Attractions" crossover, this is a weird issue. Plot-wise, it doesn't really tie-in with the later chapters (aside from also featuring the Acolytes), nor does it feature a big series-altering event like many of the later chapters (technically, this marks a separation point between Val and X-Factor, but that's not really in the same league with some later happenings). The issue itself is kind of a mess, coming as it does during a period of creative upheaval for the series, with Peter David gone (somewhat abruptly), fill-in plotter Scott Lobdell transitioning to incoming writer J.M. DeMatteis and penciler Joe Quesada on his way out as well. As a result, things are a little sloppy - Spoor is captured off-panel (and it's never said how), and Quicksilver shifts mid-issue from rationalizing the government building the Sentinels to walking away from Val in disgust for keeping the whole thing a secret. Plus, it's hard to believe Val being a secret agent of the Acolytes is what David had in mind when he had Val attacked in issue #87, particularly since all it really amounted to was, essentially, Val setting up a meeting between Quicksilver & Cortez so that someday, maybe (but not today), he'll join the Acolytes.

Certainly, using Quicksilver as a point-of-entry for a story that is ultimately about the return of Magneto makes sense, but the "seed" planted by the Acolytes never really comes to fruition, either later in the storyline, this series, or anywhere else. That, combined with the fact that everything else in this issue, plot-wise, more or less exists in a vacuum for the series. There's no lead-in to this in previous issues, and while Val's estrangement from the team carries over, it's not like X-Factor spends the next several issues fighting the Acolytes, or even following up on the Project: Wideawake revelations (aside from mildly grumbling about them). As a result, even though this is the start of a fairly significant storyline for the franchise and marks a minor development for the book in Val's estrangement, it feels weirdly isolated from the rest of the series.

All that said, I still kind of dig it, if not for its (non) impact on the larger crossover then as a relatively standalone X-Factor vs. the Acolytes fight, mostly on the strength of Quesada's art, which takes advantage of the increased page count to have some fun with page layouts and present some really gorgeous splash pages. The fight itself is well executed, giving each team member a moment to shine, with a focus on this latest iteration of the Acolytes' most interesting component: their religious veneration of Magneto, and Quicksilver's place within the orthodoxy they've built up around him. So yeah, this is a poor start to "Fatal Attractions" and not even a terribly relevant issue of this series, but it's still kinda fun in its own way.