Game of Thrones 7x06: Beyond the Wall 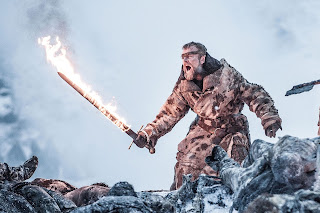 Dragonstone
Daenerys bemoans Jon Snow's decision to go capture a White Walker. She tells Tyrion that she's glad he isn't a hero. Heroes are hot, hunky men who make your loins cry out for satisfaction but, instead of quenching you're deep, desperate thirst, heroes go off on stupid, ill-advised quests that will probably get them killed.

Tyrion is less concerned about Daenerys's carnal desires and more interested in her death. More specifically, he's worried about who will succeed her and how the succession will take place. Daenerys, however, isn't keen on thinking about her own mortality.

Not much is decided here accept some acknowledgement that a benevolent dictatorship is only a good form of government for one generation. Daenerys is focused on simply becoming a benevolent dictator before worrying about anything else. Tyrion is still concerned about the long game.

Winterfell
I was trying to figure out a pun involving “the daughters of CATelyn Stark” and a CAT fight but I couldn't quite stick the landing. And that's before I even considered if the joke would be sexist or not. My main point is, though, Arya and Sansa are feuding.

Sansa is scared that Arya is going to show the note of her asking the Starks to submit to Joffrey's rule to the people of Winterfell (who probably have already seen the note when it was first sent?). Arya is mad that Sansa wrote the letter and mixes in some victim blaming as well. This leads to Arya catching Sansa searching for the note in Arya's room. So Arya uses her creepy assassin speak and a knife to the throat to scare Sansa.

Sansa goes to Littlefinger, of all people, for advice and he suggests talking to Brienne. That advice doesn't sound half bad. So, of course, Sansa sends off Brienne to King's Landing for reasons I'm not fully sure about. I think Sansa is just panicking...even though she probably has nothing to worry about.

North of the Wall
The Fellowship of the White Walkers is headed out into the great snowy unknown. There's banter about having sex to keep warm and whinging. Jon Snow tried to give Jorah the Mormont family sword, Longclaw, but Jorah has none of it. It's officially Jon Snow's now. (Screw you Lyanna Mormont.) Then the Fellowship is attacked by a zombie ice bear.

After the zombie ice bear is taken care of the Brotherhood without Banners use their flaming swords to cauterize Thoros's wounds. But he's still in pretty bad shape. The Fellowship keeps walking until they find themselves face to face with a group of zombies.

They fight the zombies but discover that when they killed the White Walker the rest of the undead who were "turned" by that White Walker die too. This means that if the Night's King is killed, all the White Walkers and undead go too!

Also, conveniently, an undead straggler that was apparently turned by another White Walker was with the group. The Fellowship capture this zombie but not before a horde of other undead are alerted to their presence. And this giant army of White Walkers and zombies start to chase the Fellowship.

Gendry runs back to Eastwatch to get help, since he's the fastest. The rest of the Fellowship run from the horde and eventually make it to a rock in the middle of a frozen lake whose ice broke just in time to keep the White Walkers away. Of course the Fellowship is now trapped and it's only a matter of time before the lake freezes again. The Night's King can be seen patiently waiting things out, since it's not like he has any projectiles to throw at them or anything.

After Thoros dies and the Brotherhood burn his body with their flame swords, the group gets a little bored. The Hound takes this as an opportunity to throw rocks at zombies. It's kind of funny but the rock hitting the newly frozen ice signals to the undead that they can proceed. Smooth move, the Hound.

So, the battle is on and our Fellowship is pretty much screwed. A few nobodies die and there are other close calls but not one of plot importance dies. They're surrounded and things look hopeless right up until Daenerys comes flying in and her three dragons start frying zombies.

It's pretty sweet. Daenerys swoops down to have everyone ride on Drogon but Jon Snow seemingly decides against it and just starts fighting the zombie horde. While Daenerys is waiting for Jon Snow the Night's King grabs an ice lance and throws it at her. I'm just kidding, he throws it at one of the moving dragons with no humans on them. He does hit one though and it's an insta-kill.

Viserion the non-Drogon dragon goes crashing into the lake. It's kind of sad but that sadness is mitigated by how expected it was the Daenerys would lose a dragon eventually. Jon Snow falls into the lake so Daenerys can't wait for him any longer and is forced to leave...never even bothering to try and send some dragon fire the Night's King way.

Anyway, Jon Snow survived the ice cold water, of course, but he's still surrounded by zombies. He seems done for but we get this episode's second savior arriving at the last possible moment. This time it's Benjen on horse who has a flaming whip thingy. Jon Snow is surprised to see Benjen but Benjen is all “I don't have time to explain to you why I don't have time to explain to you.” He then gets Jon Snow onto his horse and sends him back to Eastwatch. Benjen remains to fight the zombies because horses can't carry two people.

Jon Snow awakens all shirtless, sexy, and scarred on a boat. Daenerys is there by his side. Jon Snow apologizes about the dragon but Daenerys seems to be handling it well. Then Jon Snow and Daenerys all but declare their love for each other. That was fast.

Back up north, the undead are pulling the corpse of Viserion out of the lake. Then the Night's King turns Viserion. The White Walkers now have a zombie ice dragon, y'all!

Other Thoughts
When they show the "previously on" clips from the first couple seasons the actors look so young.

Again the talk about Jon Snow bending the knee to Daenerys is discussed as a matter of pride. I still feel like he'll simply lose all his followers if he bends the knee, regardless of his personal pride.

Honestly, I had no clue that whinging was a word.

If Arya from 5 seasons ago was yelling at Sansa like this, I'd get it. Present-day Arya should be much older and wiser.

I read Laura Hudson's review of this episode before writing this and was reminded that Arya worked under Tywin Lannister and pretty much did nothing. So for all of Arya's victim blaming of Sansa about not doing anything, what did Arya do to get vengeance on the Lannisters when she had a chance? She even had three death wishes and used none of the them on Joffrey or Sansa!

I will admit the flame swords are pretty sweet.

Why doesn't Sansa suspect Littlefinger at all?

Why does Brienne need to go to King's Landing? It sounds like Jon Snow will be representing the North there. What would her role be?

I figured Gendry giving up his hammer to run faster was going to end up biting him in the butt.

For whatever reason, I just assumed the zombies would have some sort of six sense and just know when the water was completely frozen.

I wonder how Cersei will react when she realizes the Night's King can take could take care of Daenerys's dragons for her?

I feel like they need explain the White Walkers aversion to water and how that works. Because it looked like they could jump out of the water after they fell in. Also, they apparently could jump in and hook a chain up to Visereon's dead body.

I had thought about Visereon becoming an ice dragon and Jon Snow being able to tame and ride him. Visereon is now the perfect dragon for someone with Stark blood.

Regarding Visereon's death and at the risk of writing fan fiction (and, admittedly, not knowing how this will all play out), I feel like what would have been a better way to go was to have Visereon fly over the Night's King and blast him with fire. However, the Night's King could've like, done some defensive magic mojo to "reverse" the flame into cold and have that cold travel back to Visereon killing the dragon like we saw the lance do. Everything else could stay the same but it would explain why, if the Night's King has those lances, he didn't throw it at Jon Snow and company stranded in the middle of the lake or why he chose to throw it at Visereon instead of Daenerys and the stationary Drogon. It would also explain why Daenerys didn't immediately have Drogon or the other dragon blast the Night's King with fire after he killed Visereon. It would also show the audience that Daenerys and the rest of the living's greatest weapon won't work on the Night's King and they'll have to kill him in a different, harder way.

Tormund: You have to keep moving, that's the secret. Walking's good. Fighting's better. Fucking's best.
Jon Snow: There's not a living woman within a hundred miles of here.
Tormund: We have to make do with what we got.

The Hound: Every lord I've ever met's been a cunt. Don't see why the Lord of Light should be any different.