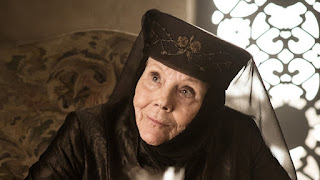 Dragonstone
Jon Snow shows up. That was fast! You know, I'm not necessarily upset at the show for speeding up certain things, like travel, but it is a bit jarring compared to the, possibly overly, deliberate pacing earlier in the series. However, despite not needing to spend several episodes with Jon Snow traveling, this show does seem to have difficulty conveying any passage of time between when Jon Snow left and when he arrived.

Anyway, Jon Snow and Tyrion are the first to meet and they do that Han Solo/Lando Calrissian thing where you act like you hate each other only to then show affection for each other. Not sure who they trying to initially fool but this wasn't the most egregious use of this trope. At least their “affection” was just a smile and head nod.

Tyrion and Jon Snow catch up a little bit since Jon Snow last saw Tyrion relieving himself off the Wall. Jon Snow is lead to Daenerys who, of course, immediately demands fealty because she is the rightful ruler of Westeros. She's nice enough to allow Jon Snow be warden of the North, though.

Jon Snow rejects this saying all this talk of ruling Westeros is pointless until the White Walkers are dealt with. He's not wrong but I can't help but feel he's going about this wrongly. Frankly, they both are. Daenerys needs allies but alienates them by demanding complete loyalty when they first meet doesn't seem the best way to garner support. And Jon Snow might want to try to explain the White Walkers better and not just immediately claim everybody is an idiot.

So, things are tense and seem to be going south. Beyond that, Jon Snow is kind of trapped because they took his boat. That's another way not to gain allies.

Later, Tyrion and Jon Snow have a heart-to-heart. Tyrion says Jon Snow's tales of White Walkers are outlandish but that he trusts him. But Daenerys has to deal with Cersei first. What else could help Jon Snow. It takes him a while but Jon Snow finally remembers the dragonglass.

Tyrion successfully convinces Daenerys to allow Jon Snow to mine the dragonglass. The beginnings of an alliance has been brokered. Perhaps wedding bells are in the future?

After all this business is done Daenerys finally asks Tyrion about the Unsullied army. We'll get to what happens later but, seriously, why is she asking Tyrion this? Shouldn't she have known about whatever Tyrion's plan was BEFORE sending off her army?

On the Sea
Theon gets rescued from the sea by what I presume is one of Yara's people? They seem concerned about what happened and Theon lets them know she was kidnapped despite him doing everything he could to save her. The men aren't buying it.

King's Landing
Euron is marching through the streets of King's Landing with his prisoners: Yara, Ellaria and Tyene. The people are cheering for him and hurling insults at the hostages. I'm very confused why they'd be cheering for Cersei considering she blew up, like, half the city.

So, now Euron expects Cersei to marry him. She declares she will, after the war is over. I guess he believes it despite...I don't know...everything we know about Cersei? Euron is so confident he even asks Jaime advice on sexing up his sister because, you guys, Euron is just the worst and we need to be reminded of that fact every time he's on screen.

Ellaria and Tyene are shackled in some dungeon and Cersei blah, blah, blahs about she's the true victim and everyone needs to pay for what has been done to her. She of course, taunts Ellaria about Oberon, just to be extra classy. Cersei then decides to get out some of lesbian desires and torture Ellaria by kissing Tyene with the same poison Myrcella was killed by. That's called killing two birds with one stone, my friend.

It's not all fun and games for Cersei, though. She has to meet with a banker. That always suck. He continually rubbed his fingers together so Cersei promises to have all the money he's owed by then end of the week. That's an awfully big check Cersei just wrote.

Oldtown
Jorah is inspected and is all healed. He's got some grey scarring but he's free to go. Archmaester Ebrose is suspicious of how this happened but mum's the word on Sam's secret surgery.

Later, Sam gets chastises by Archmaester Ebrose for performing secret surgery. Ebrose is a combination of mad at Sam's recklessness and impressed by Sam's success. So, it all equals out and Sam has to transcribe some old documents.

Winterfell
Sansa is talking with some Lords or just higher ups? Well she's talking to important people about the food supplies with, of course, Littlefinger skulking off to the side. She seemed to come up with a good plan. I'd say this is meant to show that Sansa would be a better peace time leader while Jon Snow is a better war time leader but, after remembering the Battle of the Bastards, I'm not sure Jon Snow is a great war time leader either? What is Jon Snow good at? Rallying people behind him, I suppose. Which isn't an unimportant skill.

Anyway, once everyone leaves Littlefinger starts to talk to Sansa about existing in all universes at once. Perhaps Baelish should make sure his weed isn't laced with anything. But then, Wun Wun shows up!

Like others, Wun Wun has convinced Sansa he's Bran. She seems happy to him. They go back into the garden where Wun Wun poorly explains that he's the Three-Eyed Raven. He then starts talking in detail about, and seemingly fetishizing, the night Sansa was raped. A very creepy dick move by the Three-Eyed Raven.

Casterly Rock
So, back to this army Daenerys sent off with no clue as to what they'd be doing. Apparently, their plan was to storm Casterly Rock. Of course, it's supposed to be impregnable but thanks to the fact that Tyrion managed the creation of the sewers and thus created a secret whore tunnel a few Unsullied were able to sneak in and open the gates.

What the Unsullied find, though, is Casterly Rock is all but abandoned. Grey Worm screams at one of the few remaining guards to tell him where everyone went. Then, Grey Worm sees Euron's invincible army attacking his fleet.

Highgarden
Where did everyone at Casterly Rock go? Well, the Lannister army went to Highgarden, where apparently the Tyrell Army was no match for them. So the Lannisters took Highgarden easily and all the riches within.

Jaime meets with Olenna who wants to know her fate. Jaime goes over all the terrible things Cersei wanted to do to her but, since he's a good guy, Jaime is just going to give her a painless poison. Olenna eagerly drinks it and then makes sure Jaime knows that she's the one responsible for Joffrey's death.

My Rant
Alright, I'm calling BS on this. I mean, I didn't expect Daenerys to steam roll Cersei but this is ridiculous. Her armies are going down like chumps! First, Euron (with his boats that took, what, a week to build?) takes down Yara and her navy and seemingly receives no losses. So much so that he can then attack the Unsullied at Casterly Rock and easily take out the navy there.

Now, obviously the Unsullied aren't masters of the see, but I'd expect them to be able to do SOMETHING. And then there is Yara. Navy was her thing! Sure, she was surprised, but she should've been able to do more. At least make Euron pay a price for attacking them.

That brings us to the Tyrells. Now, Olenna gives us a throwaway line about fighting not being the Tyrell's forte, but still, this is there home turf! Sure, maybe they can't beat the Lannisters, but they should be able to slow them down. They're in Highgarden. This should have become a long drawn out siege. Maybe hold them off for long enough for Daenerys to come help them? Instead their castle is just overtaken seemingly effortlessly? How?

Other Thoughts
The show is really making a big deal out of Sansa being in charge of Winterfell while Jon Snow is gone. How long do the people of Winterfell expect him to be away?

Daenerys is all in on ruling as Queen of Westeros being her birthright because of her lineage. How will she take it when she learns that, when talking birthright, Jon Snow should be king?

Jon Snow meeting Daenerys means cold and heat have come together melodiously...or something.

Varys was acting exceptionally smarmy. Frankly, a lot of people have been acting like assholes. But I suppose his hatred of sorcerers is well founded so mocking Melisandre makes a fair amount of sense.

So both Melisandre and Varys are destined to die on Westeros, huh? I suppose that isn't a bold claim for Varys. Maybe it'll just be old age?

So why is Jon Snow coming back to life a big secret?

I think Jon Snow should explain to Daenerys that if he bends a knee she would only be gaining his services and not the North as a whole since the people of the North would immediately reject him.

I'm not saying that it wouldn't be possible to get the people of King's Landing behind Cersei and, by extension, Euron, but I'd like to see how they did it.

I was hoping Tyene would bite Cersei when she kissed her. She should have.

I'm curious if there's something in the documents Sam is transcribing that might be of interest to him.

I'm really starting to believe George R.R. Martin is using the rest of this series to focus group test his ideas before finishing the books.

Tyrion: She's much smarter than she lets on.
Jon Snow: She's starting to let on.
Tyrion: Good.

Tyrion: I came down here to brood over my failure to predict the Greyjoy attack. You're making it difficult. You look a lot better brooding than I do. You make me feel like I'm failing at brooding over failing.

Tyrion: But a wise man once said that you should never believe a thing simply because you want to believe it.
Daenerys: Which wise man said this?
Tyrion: I don't remember.
Daenerys: Are you trying to present your own statements as ancient wisdom?
Tyrion: I'd never do that.....to you.....