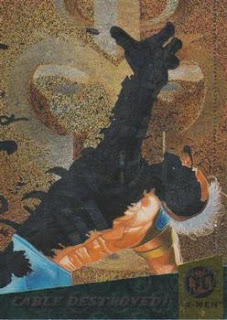 As you may or may not have noticed (depending on how closely you're watching for new posts), I've struggled a bit lately in getting posts up anywhere close to their scheduled release times/days, with both the last Wolverine and Excalibur reviews going up well into the week following their planned release date. A combination of a busier-than-usual summer workload and real life junk (nothing serious, just a surplus of mundane stuff that has eaten up my time at the computer and worn me down a bit mentally) is to blame, but with at least one more abnormal week ahead (thankfully due, in part, to having some legitimately fun stuff planned for at least part of Labor Day weekend), and in the hopes of getting caught up and back to something more closely approximating a regular schedule (and to get Force in Focus running regularly again), I've decided to split what was originally planned for review in the first week of September into two weeks.

That aside, this month is another one with several significant events, including a couple of big returns in X-Force as "Fatal Attractions" continues, the introduction of what will become one of the franchise's longest-running mysteries in X-Men, and a genuinely emotional issue of Uncanny X-Men as the X-Men say goodbye to one of their own.