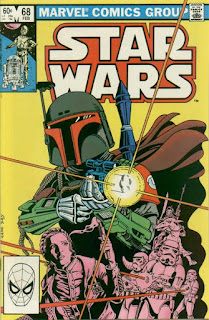 In a Nutshell
Leia meets Fenn Shysa on Manadalore while searching for Dengar.

Plot
Luke, Leia & Lando depart Arbra, each in search of a different bounty hunter who may be able to provide information as to the whereabouts of Boba Fett & Han Solo. Leia, looking for Dengar, lands on the planet Mandalore. She and Threepio come across a group of Imperial-backed slavers, but before they can intervene, the slavers are attacked by soldiers wearing armor like Boba Fett's. Leia meets their leader, Fenn Shysa, and he takes her back to his village, where she learns about Boba Fett's past and discovers that Shysa has captured Dengar, who was attempting to claim a bounty on Shysa. Dengar agrees to tell Leia everything she wants to know in exchange for breaking him free. That night, while Leia distracts Shysa and knocks him out, Threepio frees Dengar. But as the three race for Leia's ship, Dengar reveals that he's altered their deal, having signaled the local Imperial troops in the hopes of capturing an even bigger bounty than Shysa, just as Leia & Threepio are surrounded by a contingent of Stormtroopers.

Firsts and Other Notables
This issue introduces Fenn Shysa, a Mandalorian wearing Boba Fett-like armor. He will appear again next issue and then a few more times post-Return of the Jedi, and like Shira Brie, he is one of the few original characters from this series to survive into the later Expanded Universe, being mentioned in at least one Dark Horse issue, a few of the novels, and having some of his backstory and history reflected in the various non-fiction guides. 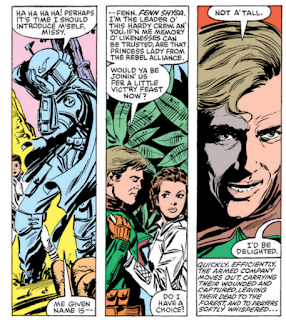 Along with Shysa, this issue introduces the planet Mandalore, along with the concept that it is the home to a group of supercommandoes all wearing Fett-like armor, explicitly making Boba Fett a Mandalorian as a result, all elements leftover from early drafts of the Empire Strikes Back script adopted here.

In addition to learning Boba Fett is from Mandalore, through Shysa, this issue also provides some backstory for Boba Fett, saying he was the commander of the Mandalorian Protectors who fought alongside the Empire during the Clone Wars, before becoming disillusioned and striking out on his own as bounty hunter. 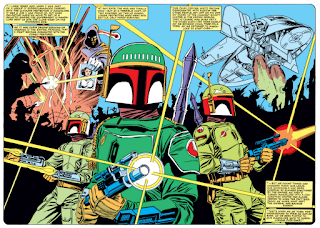 Dengar returns in this issue, and actually gets some dialogue!

This issue also features the first appearance in this series of what will later be deemed the AT-AR (All Terrain Advanced Raider), a smaller version of the AT-ST scout walker that appeared briefly in Empire and will feature more prominently in Return of the Jedi. The AT-AR initially appeared in the Star Wars newspaper strip story "Bounty Hunter of Ord Mantell" a couple years prior to this issue. 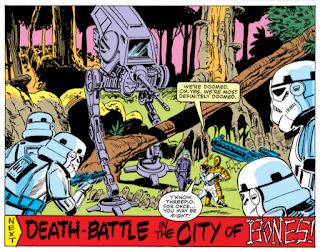 A Work in Progress
Leia dons an orange Rebel pilot flight suit for most of this issue.

Artistic Achievement
There's a great shot of Han in carbonite looming over Leia as she considers her feelings for Han.

Later, as Luke, Leia & Lando depart in separate directions, their ships are depicted in a one-page spread. Throughout the issue, Day uses some Steranko-esque panels, with a tall vertical panel on either side of the page, with some panels in the shape of figures.

Um, Actually
Obviously, pretty much all of Boba Fett's backstory presented here is overwritten by Attack of the Clones and subsequent Clone Wars episodes, though the old Expanded Universe did work to preserve some of it by establishing that the Fett whom Shysa presumably fought under in the Clone Wars was one of the Jango Fett clones, whom rumors suggested was Jango's son, and that Shysa was tasked during the Clone Wars with capturing Amidala, not Leia.

And much of Mandalore's depiction here, in which it is a generally jungle world, will be overwritten by appearances in Clone Wars and Rebels episodes, where it appears as a more open, windswept planet doted by urban centers.

Jabba is back to being a "Hut".

Slavers are said to be as feared as the fallen Jedis; what few Jedi are left post Order 66 are generally in hiding and considered relics of the past and/or myths (also, the plural of Jedi is "Jedi").

The Space-Lexicon
Leia refers to Dengar as a "bountyman", rather than bounty hunter.

Remember The Empire Strikes Back?
Leia and Han's relationship gets rehashed a few times in this issue. 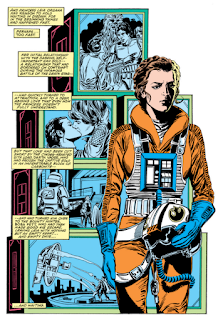 Just Yesterday, In a Galaxy Surprisingly Close By
Fenn's dialogue is written such that it seems meant to be an approximation of an Irish brogue.

Austin's Analysis
This is just a really great issue. The art, at least in terms of panel and page layouts, is top-notch, featuring some Steranko-esque images (like action taking place inside a panel shaped like Leia) alongside some genuinely gorgeous pin-ups (like the full page rendition of Luke's X-wing, Leia's Y-wing and the Falcon departing Arbra in three different directions). In terms of characterization,  this issue finally provides a long-overdue examination of Leia's feelings for Han, while also setting up a classic Do a Bad Thing for a Good Reason (That Will Definitely Backfire) dilemma for her.

And in terms of plot, the series finally makes a concerted effort to address the Han Solo-shaped elephant in the room by having the people who care most about Han finally make a concerted effort to track him down, a plot that should have been the first thing this series did post-Empire. In the process, it evens brings back Dengar and provides some backstory for Boba Fett. While later stories, first in the once-canonical Expanded Universe and then eventually the film canon, will eventually overwrite much that is presented here, using this series as a vehicle to explore one of the more popular (even back then) yet little-used characters from Empire is another "duh" idea it took entirely too long to approach.

All in all, the combination of strong art and characterization along with the return of narrative significance in the form of the search for Han, the return of Dengar, and some Boba Fett backstory, make this one of the strongest issues of the series yet.

Next Issue
Leia must escape from Mandalore.