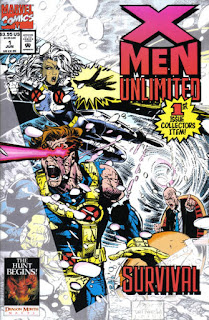 Plot
In Antarctica, a visor-less Cyclops searches the wreckage of the crashed Blackbird for Xavier, who then helps Cyclops find Storm. Elsewhere, new Upstart Sienna Blaze is angry to learn her attack on the three X-Men hasn't killed them yet. Back at the mansion, Psylocke & Bishop set out to rescue their comrades. In Antarctica, Xavier, Storm & Cyclops recall events leading up to the crash for any information about their attacker, remembering being hit by a massive energy blast on their way home from the Savage Land and how Cyclops lost his visor trying to bring the craft down safely. With the blizzard outside the remnants of the plane raging, Storm attempts to tame it, but its size overwhelms her, triggering a massive fever. The next morning, Cyclops & Storm awake to find Xavier gone, having set out in the night in search of a psionic imprint he detected, a search which ultimately leaves him stranded in the blizzard. Storm & Cyclops set out after him, encountering Blaze, who once again tries to kill them. But working with a returned Xavier, they manage to defeat her, though she uses her power to escape, triggering an electro-magnetic vacuum that nearly destroys the X-Men. But Storm is able to protect the trio until Xavier senses the arrival of Bishop & Psylocke, who retrieve them. Later, Xavier recalls his rescue by an unseen friend, as a shadowy figure watches the Blackbird depart.


Firsts and Other Notables
X-Men Unlimited is the X-office's contribution to Marvel's early 90s series of Unlimited titles (which also included Spider-Man and Fantastic Four variations), part of their lets-keep-glutting-the-marketing-with-more-books-this-bubble-can't-possibly-burst-right? publishing strategy. The Unlimited books were a sub-line of titles published quarterly, intended to fill the "fifth week" gap in publishing among Marvels two big title families (and Fantastic Four). Traditionally, new comics come out on Wednesdays; because our calendar is weird, every few months, a month contains five Wednesdays. Since Marvel published four Spider-Man books at this point in time, and four "main" X-books (Uncanny, X-Men, X-Force and X-Factor), this meant that readers could expect a new Spider-Man or X-Men issue to be on the shelves every Wednesday, except for that quarterly fifth Wednesday. Thus, the Unlimited series were born, to give Spider-Man and X-fans (and Fantastic Four fans) a new issue featuring their favorite characters every Fifth Wednesday.

Initially, each issue was 64 pages long (bigger than an annual), with non-regular creative teams and featuring high-quality, glossy paper that showcased improved coloring techniques (eventually, all books across the line would switch over to the glossier paper, which is still (in some form) in use today, and which I absolutely hate; yes, it allows for better coloring, but it makes comics more like magazines than their own thing, and caused prices to skyrocket (among other factors, of course); to this day, when I open a new comic, I'm taken aback and saddened when I'm reminded that comics have a different texture and smell than they used).

The original intent was also to use this series (and it's increased page size) to tell bigger, more notable stories than a regular issue, and that holds true, more or less, for the series' first dozen or so issues. Unfortunately, after that, the series just churns out superfluous stories on the level of an unremarkable-to-bad annual four times a year (it also lasts way longer than it had any business doing, into 2003).

Chris Bachalo draws this issue; an up-and-coming artist from DC's Vertigo imprint, this marks Bachalo's first contribution to the X-office, the beginning of a lengthy association with the characters. He will soon after this help launch Generation X (designing most of the original characters therein), then later work on Uncanny with Steven Seagle, then return to the series alongside Chris Claremont (during Claremont's second return to the book), then segue over to the post-Grant Morrison X-Men for Mike Carey's run from 2006-2008, then even later return to launch Wolverine and the X-Men and, after that, most of the third volume of Uncanny, from 2013-2015. I tend to overlook Bachalo when considering the definitive X-artists, in part because his work is scattered across so many different titles and eras (rather than coming in one long chunk on one specific title) and in part because pretty much all his runs on all titles are marked by frequent fill-ins from other artists (and also in part because, while I like his work on a page-to-page basis, it becomes increasingly difficult to follow as he becomes more established, the end result being comics that look good but are harder to read) but in terms of sheer number of issues drawn and years involved in the franchise on one title or another, along with the characters created for Generation X, he's definitely worthy of being included in any conversation about all-time significant X-Men artists, and all of that starts with this issue.

Sienna Blaze, probably the character with the most appearances before her actual official first appearance, makes her first official appearance in this issue! She introduces herself (to the X-Men, at least) by attempting to kill Professor X, Cyclops and Storm as part of the Upstarts competition, making her the latest (and final) person to join that group. 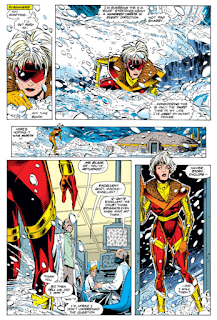 Though somewhat vague here, her power is the ability to essentially create an electro-magnetic pulse, the act of which has a devastating affecting on the planet (as it rips the planet's EM shield), making her run the risk of destroying the world every time she uses her power (she says her attack on the X-Men leaders in this issue marks only the third time she's used her power). This is one of those Morrisonian powers that sounds cool when you first hear it, but becomes ridiculous and/or unworkable the more you think about it (I mean, once it's established that she could destroy the world any time she uses her power, it becomes unworkable - she *can't* actually destroy the world, but then every time she doesn't, it takes way from the threat and unique hook of the character. Plus, world-destroying nihilism isn't the most engaging personality trait). 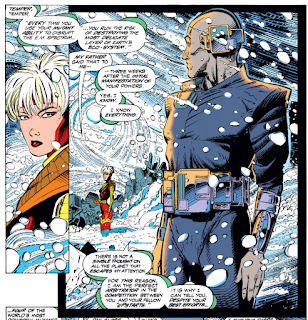 This issue continues to tease the return of Magneto. First, the Gamesmaster, in discussing her attack with Sienna, casually mentions there are four of the most powerful mutants in the world in the vicinity (a fourth in addition to Xavier, Cyclops and Storm). 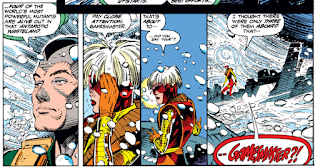 Later, Professor X senses someone in the blizzard and goes in search of whomever it is. He is ultimately rescued by an unseen figure and taken to a massive citadel. This will later turn out to be Magneto (recall that Magneto has a history of Antarctic bases). 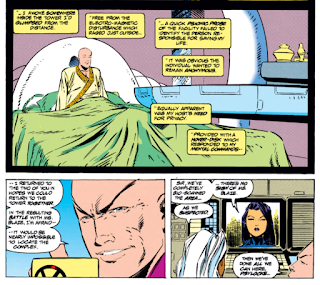 Rounding out the main story, this issue contains six pinups, each helpfully titled and credited on a title page. 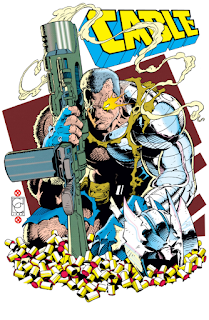 The Chronology Corner
This issue takes place between Uncanny X-Men #300 & #301, before the Psylocke/Revanche story in X-Men and Uncanny X-Men Annual #17.

A Work in Progress
Xavier is able to reduce Storm's fever by telepathically controlling her bio-rhythms.

Cyclops notes that his life truly began with the X-Men. 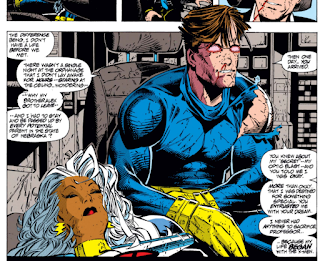 There's a great bit where Xavier tries to get Cyclops to call him "Charles" rather than Professor, something all the original X-Men are comfortable doing except for Cyclops. It's...difficult for Cyclops. 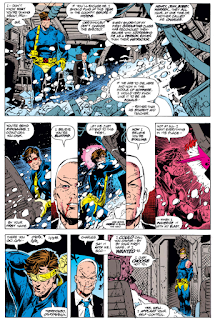 In another Morrisonian bit, Sienna is able to use her power to teleport because something-something electro-magnetism, but this causes problems for the X-Men because she takes part of the EM field with her (or something), not unlike how Nightcrawler's "bamf" is the sound produced by air rushing in to fill the vacuum left by the air surrounding him which leaves with him, only here the "bamf" is massively destructive, because magnets. 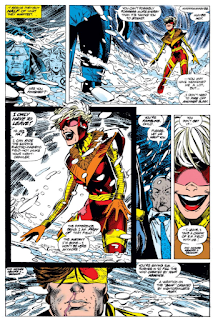 The Grim 'n' Gritty 90s
Cyclops uses the shoulder strap of his uniform as a blindfold, suggesting those pouches are more flexible than one would expect. 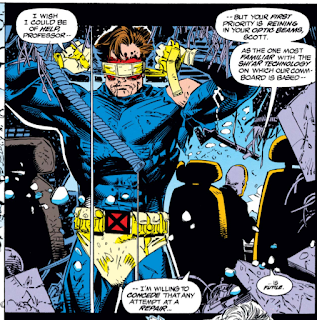 Young Love
While wracked with fever, Storm calls out to Forge. 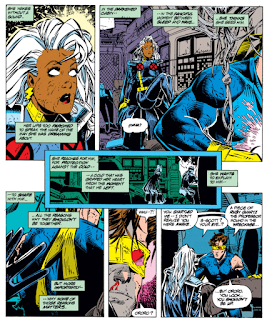 The Awesome and Terrible Power of Cyclops
Throughout the first part of the issue, Cyclops uses the old "tightly wound blindfold" trick to keep his eyes closed (like when he was trapped on Magneto's island with Lee Forester circa Uncanny #150). Later, he fashions a ruby-quartz eye-patch, essentially, out of a piece of his visor that is found in the wreckage.

Austin's Analysis
Considering it is being told in in service to the launch of a new, oversized quarterly series featuring fancy paper and cutting edge coloring, this story is surprisingly limited in scope: for the most part, it features only three protagonits (and one villain), one (claustrophobic) setting (an Antarctic blizzard), with most of the action set in and around the damaged cockpit of a Blackbird. And while it introduces (formally) a new Upstart and contributes to the ongoing "return of Magneto" teases, it is mostly a combination character piece and survival tale. For the most part, that limited focus works to its advantage.

The survival elements are, granted, deeply sci-fi/comic book-y in nature (stemming mostly from the way Sienna Blaze's power affects Storm's), but there's something entertainly-raw in having a blind Cyclops trying to find a hoverchair-less Professor X in the middle of a blizzard, while Storm burns with fever because her body is trying to compensate for the extreme cold/exposure. The scene in which Xavier tries to get Cyclops to call him "Charles" is a great bit of characterization, and Storm & Cyclops play well off each other throughout. The extra pages give the moments beyond the immediate urgency of surviving and fighting Sienna Blaze room to breathe, while the art and coloring lend an appropriate grandiosity to the occasions in which Blaze uses her (absolutely ludicrous) power. Ironically, the elements that made this a big deal in 1993 - the introduction of Blaze (who, pun intended, blazes out pretty quickly), the Magneto teases, the launch of a new series - have aged more or less into irrelevancy, but the core story, of the three X-Men leaders braving the elements and deepening their connections to one other, still holds up, and manages to make the most of the new format.

Next Issue
Tomorrow, the Chalkers return and Charon debuts in X-Factor Annual #8. Friday, Cable returns (from the future) in Cable #2. Next week, Uncanny X-Men #302.