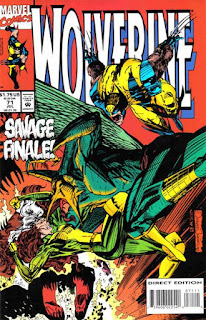 In a Nutshell
Wolverine defeats Sauron

Plot
As Rogue flies into Sauron's citadel and attacks him, Wolverine climbs up out of the pit via the stampede of dinosaurs being dropped on him. He and Rogue capture Sauron and bring him to Brainchild's laboratory, intending to use Brainchild's genetic transformer to revert Sauron to Karl Lykos. But Sauron argues that he and Lykos are essentially two different people: to bring back Lykos is to kill Sauron. He maintains that, in the Savage Land, Sauron has a better right to life than Lykos, and Wolverine grudgingly agrees, setting him loose. Shortly thereafter, Storm and Bishop arrive in the Blackbird, sent by Xavier due to the lack of communication from Wolverine and Rogue. They load up the fist made of iron to bring back to the professor, and when Storm asks what he thinks of the evidence they found, Wolverine declares that he saw enough to know that a storm is brewing, with the X-Men caught in the middle of it.

Firsts and Other Notables
Wolverine's latest Savage Land adventure concludes, with him summing up the various teases about the return of Magneto sprinkled throughout the story by declaring that a storm is brewing, which is one of those fictional tropes that always gets me (ie "we just got through some bad stuff, but there's a storm brewing, meaning something worse is coming down the road...") and, as a kid, helped build up the mystery around and anticipation for the return of Magneto far better than all of Brainchild's constant shrieking urging people not to say Magneto's name (of which he does one more time in this issue). 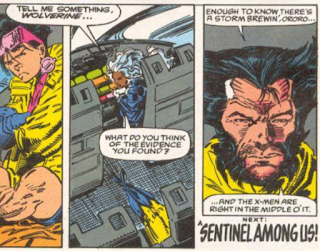 Jubilee's adventure with the pterodactyl riders comes to a close off-panel, as Bishop reveals that he and Storm rescued her just as she was about to be married off, with the riders believing her to be a boy. 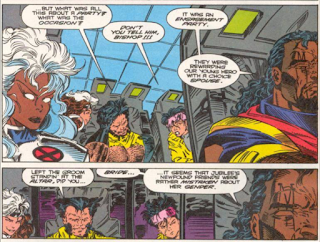 A Work in Progress
Hama apparently forgot (and never knew) that Rogue is invulnerable, as he has her dodging spears thrown by Sauron's followers, which should be of no concern to her whatsoever.

As Wolverine attempts to use Brainchild's genetic machine on Sauron to revert him to Karl Lykos, Sauron argues that he and Lykos are functionally two different people, and that forcing a transformation back to Lykos is essentially killing Sauron.

He then argues that he, Sauron, is worth saving over Lykos because the Savage Land is a place for savages, and everyone there is savage (which doesn't quite seem to fit given the X-Men's history with the seemingly-benevolent Fall People, who, while "savage" in an old world, colonial kind of way, never seemed all that aggressive and warlike when left to their own devices. 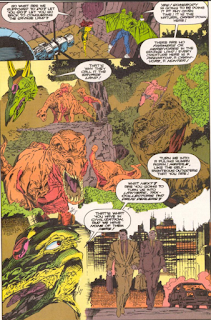 The Reference Section
Wolverine compares his claws to Ginsu knives, a brand of knives famously hawked on TV infomercials in the 70s and 80s which led to a fair amount of pop culture ubiquity around that time and after. 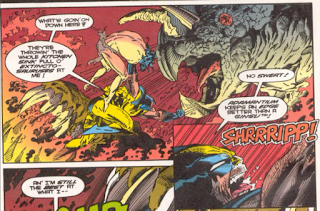 The title of this issue's story is, of course, a reference to the colossally-popular Michael Crichton book and film adaptation, Billy and the Cloneasaurus.

The Best There is at What He Does
Wolverine once again suggests that his healing factor is in low gear despite the fact that it healed his hamstring in moments. 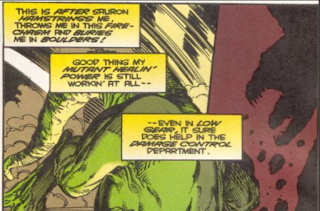 Austin's Analysis
Wolverine, Rogue & Jubilee's Savage Land adventure comes to a close, not because of significant narrative resolution, but rather because Hama decided this would be a three issue story, and the third issue was up. Wolverine climbing out of a pit by riding an avalanche of dinosaurs is certainly fun, but everything after that is fairly arbitrary: once he's face-to-face with Sauron again, Sauron capitulates because he apparently is also aware this is the third issue of a three issue story - there's no real reason given for why Sauron wouldn't continue to fight Wolverine, given how evenly matched they mostly were last issue. After that, Wolverine has to barely restrain the villain as they bring him to Brainchild, and while the notion that bringing back Lykos essentially means killing Sauron is interesting, there's no room at this point to really explore it (and the end result is that Lykos is still "dead" by Sauron's logic, so the resolution is, at best, a wash in terms of saving lives).

Combine that with some other sloppy writing (like Rogue having to dodge spears) and Jubilee's whole subplot resolving off panel, and the story ends up feeling very rushed and, Magneto teases aside, ephemeral (and even the Magneto teases, by their very nature, don't amount to anything more than teases in this story, despite all the page time handed over to them). Three issues should be more than enough for a proper Wolverine/Sauron Savage Land showdown, but after an all-fight issue last time out, Hama apparently didn't save himself enough room to pay off even the basic requirements of the story in a credible manner. Which is a shame, because the end result is a story that feels superfluous, despite also being one of the first stories in this series to directly connect to happenings in the other X-books.