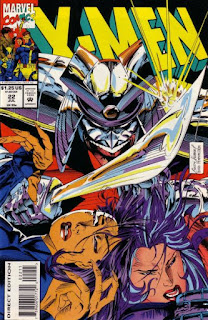 In a Nutshell
The X-Men learn "the truth" about Psylocke.

Plot
Gambit and the Psylockes attack and defeat Silver Samurai, with their battle revealing a hidden page from Lord Nyoirin's diary. Meanwhile, Shinobi Shaw meets with Matsuo, Lord Tatsu'o and Lord Nyoirin to discuss their territorial claims to Jigoku criminal enterprises. In Alaska, Cyclop's tells his grandparents the truth of what happened to his son, and meets their neighbor, Mike Milbury. Back at Nyoirin's estate, Gambit, Beast and the Psylockes read the diary page, which reveals that after Psylocke emerged from the Siege Perilous, she was found by Nyoirin's lover and assassin, Kwannon, and when Kwannon touched Psylocke, their minds fused. Losing all sense of her self, Kwannon fled, eventually encountering Matsuo and becoming transformed into the Hand's agent. Psylocke angrily refutes the revelations held in the diary, but just then, Lord Nyoirin returns, accompanied by Silver Samurai, and declares that both women are who they claim to be; the real question is if either can ever be whole again, or if they want to. Meanwhile, in Alaska, Cyclops checks on Milbury, only to learn he's actually Mr. Sinister, who has come to discuss Cyclop's family tree with him.

Firsts and Other Notables
The big retcon involving Revanche/Kwannon & Psylocke is unveiled here, as Nicieza reveals that, prior to being found by Matsu'o and the Hand, a post-Siege Perilous British Psylocke was found by Kwannon, Lord Nyoirin's ninja assassin (and lover). Upon physical contact, Kwannon's mind fused with Psylocke's and the pairs minds basically got shuffled up. After this, Matsu'o finds the Asian Kwannon, now believing herself to be Psylocke, and brainwashes her into serving the Hand as Lady Mandarin. Meanwhile, Nyoirin, in search of Kwannon, tracks down British Psylocke/Revanche, who now has Kwannon's memories as well, and nurses her back to health. 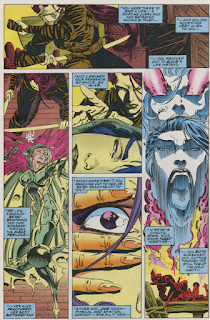 Of course, all of this flies in the face of Uncanny X-Men #255, which depicted Matsu'o discovering a post-Siege but clearly British Psylocke. So this isn't just a retcon adding something between panels or expanding on what was previously depicted: it is rewriting and directly contradicting something clearly depicted in a previous issue (which, outside of major reboots, superhero comics tend to avoid doing). Reportedly, this all came about because Nicieza had never read Uncanny #255, so he assumed the first encounter between Psylocke & Matsu'o happened offpanel, thus giving him room to play around with the details of that encounter. 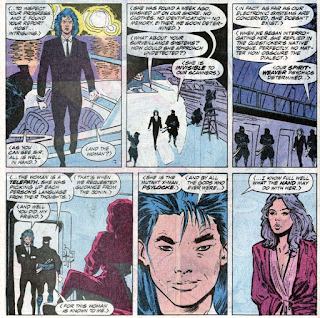 Questions remain for the X-Men, such as how Revanche can speak Japanese and or how Psylocke knows martial arts if her mind was simply placed in Kwannon's body; a teased by Nyoirin at the end of this issue, it will shortly be revealed that Kwannon and Psylocke's minds weren't directly swapped, but rather mixed up and re-dispersed, with each gaining access to the other's memories/abilities.

Mr. Sinister pops up in this issue, his first appearance since "X-Cutioner's Song" ended, in the guise of Cyclop's grandfather's neighbor Mike Milbury. "Milbury" is an alias Sinister will use (and be revealed to have used in the past) again, usually pairing it with "Nathan" (the name of his child guise in Cyclop's orphanage) instead of Mike. Though it's not made overt here, it makes sense for Sinister to have been in close proximity to Cyclop's grandparents, given the way he placed Madelyne Pryor with their company after her creation and moved them off the board after trying to eliminate Madelyne (circa the early issues of X-Factor). 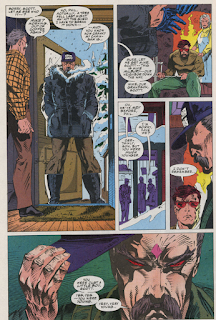 Cyclops' grandparents are seen reacting to the true fate of Cyclop's son. 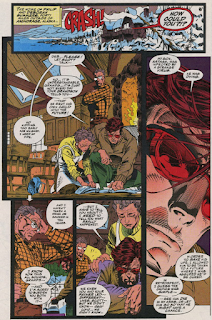 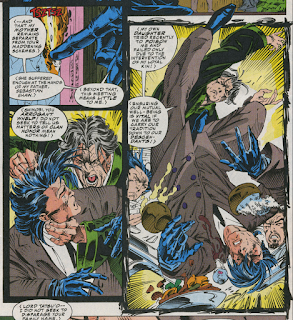 A Work in Progress
Silver Samurai of course knows Gambit by the name "LeBeau", though I don't recall if their apparent specific history together is ever explored.

Beast, who ends the previous issue by being slashed from behind by Silver Samurai, recovers remarkably quickly, in the space of this issue's opening pages.

Shinobi is shown phasing through cars/buildings, not unlike Shadowcat, which is consistent with his power set, but not how it usually depicted. 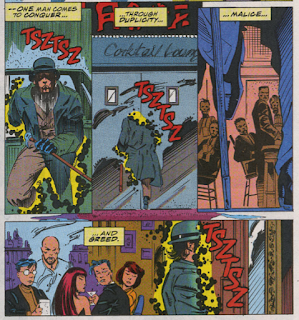 Shinobi also makes a reference to his heretofore unknown mother, in a way that suggests this might be setup for a future plot, but as far as I know, it isn't.

Cyclops notes that he and the X-Men aren't really talking about what happened with Cable & Stryfe at the end of "X-Cutioner's Song". 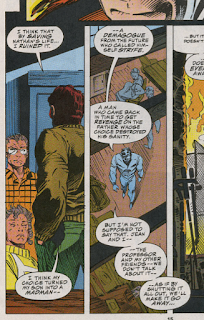 Artistic Achievements
I'm not sure if it's a change in coloring techniques, the result of having had an issue off, or simply Andy Kuber coming more into his own, but this issue has always seemed like a step up in terms of the art, relative to his earlier issues. It's still rough around the edges (and his work will continue to improve throughout his run), but this is the first in several quality "jumps" that can be seen from during his run, with the art seeming deeper and lusher, and the linework more full and less scratchy (of course, those improvements are down to the colorist and inker more so than Kubert, but they're also the same creators who have been working with him on previous issues as well; it just seems like *something* has changed for the better).

Austin's Analysis
Though the story technically continues through the next issue, this is where Nicieza's big Psylocke retcon (and, ultimately, the point of this story) comes out. It's a fairly simple change: instead of being physically transformed into an Asian woman by the Hand, a post-Siege Perilous Psylocke had her mind scrambled via interaction with an Asian ninja assassin, whom the Hand later brainwashed into serving the Mandarin. Of course, it all falls apart because it requires OG Psylocke to encounter Kwannon *before* being found by Matsu'o, and we all saw Matsu'o discover post-Siege OG Psylocke on panel. So right from the get-go, things are off.

Now, the blame for this could be laid at Nicieza's feet, for not reading every previous issue involving the characters he's now writing (or at least cross-referencing relevant issues after coming up with this idea), but at the same time, comics have a safety net in place for this kind of thing, and it's editors. So really, this seems like something Bob Harras should have caught, especially since he was also the editor on the issue which Nicieza missed and led to this whole kerfuffle. Ultimately, it's a fairly harmless retcon, one which removes some of the questionable physical transformation stuff for a more straightforward (by comics' standards) mind swape scenario. It's also easy enough to squint and find a way to reconcile this retcon even with the blunder (which, in the end, is ultimately what happens when Nicieza returns to this story to retcon his retcon to rectify his mistake). But it still feels like a huge miss by editorial, one which, unfortunately, presages the diminished role of the editor in preserving some semblance of narrative and character continuity in modern comics.