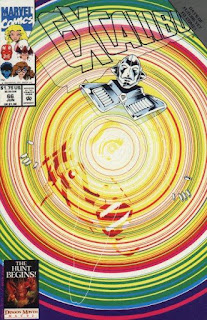 In a Nutshell
The truth between Widget is revealed as Excalibur travels to the future.

Plot
In 2013, Ahab attempts to harness the residual temporal energy surrounding Kate Pryde to follow Rachel Summers back in time. But the combination of that energy, radiation from the Sentinel attack that triggered Rachel's time jump, and Kate's phasing ability cause a malfunction that results in her being fused with a Sentinel and tossed into the timestream, emerging as Widget two years later before fleeing to warn Rachel. In the present, Excalibur returns to Braddock Manor, and Rachel immediately prepares to return to her future timeline. In 2015, Widget encounters the RCX, then senses Rachel entering the timestream just as Ahab launches a Sentinel attack, hoping to capture Widget. The link between Widget and Rachel opens a gateway stable enough for the rest of Excalibur to travel into the future, where they assist the RCX in repelling Ahab and the Sentinels. However, both Widget & Rachel are captured as Ahab retreats. Though the RCX insists Excalibur would be insane to go to the Sentinels headquarters, Nightcrawler declares that since they're stranded in the future, their choice is simple: defeat the Sentinels or die trying.

Firsts and Other Notables
This issue returns to the "Days of Future Past" timeline from which Rachel hails, returning to the events that led to her being sent back in time by Kate Pryde, as well as Ahab, Rachel's Hound master who first appeared during the "Days of Future Present" story which ran through the 1990 X-books annuals (and Fantastic Four).

In the process, Widget's whole deal gets explained, as it's revealed that Widget is in fact a cybernetic Kate Pryde, fused with mechanical parts and inundated with temporal energy (and radiation) as Ahab attempted to use her to track down the time traveling Rachel after Kate sent Rachel back to the X-Men's present (as seen in X-Men #192). Disappearing from then-futuristic 2013, Widget next appeared in 2015 as she attempted to warn Rachel, with the various appearances of Widget showing up, shouting cryptic things and then disappearing sprinkled throughout the previous dozen or so issues instances of Widget emerging from the timestream as she sought out Rachel. 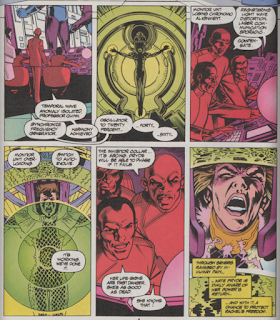 It's explicitly stated her that while Rachel has the mutant ability to send her consciousness through time, it is the Phoenix Force which enables her to transport her physical body through time as well. 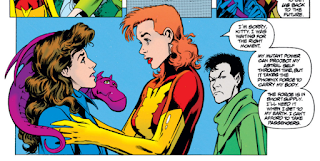 Between issues, Kylun received a new costume, and Kitty notes that makes her the only member of the team still wearing her original look, something that bothers her. This will culminate in Kitty adopting a new costume in issue #71, but if Davis was going somewhere else with this, it never comes to fruition. 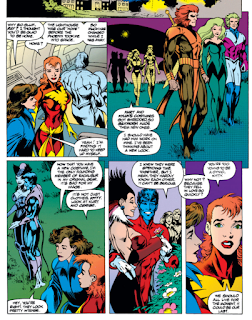 In the future, Excalibur fights alongside a later version of the RCX.

By the way, it's super weird to reference dates like "2013" and "2015" and have to remind myself those are "future" years as far as this story is concerned, in a way that didn't seem as weird when writing about the original "Days of Future Past".

A Work in Progress
In 2013 (prior to the 2015 setting of later events in this issue) Ahab is shown to be contained in a Captain Pike-esque floating wheelchair, suggesting the majority of his limbs in his later look are cybernetic. 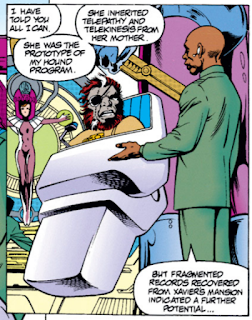 2015 Ahab references the events of "Days of Future Present", and correctly cites their setting as an alternate reality to his own. 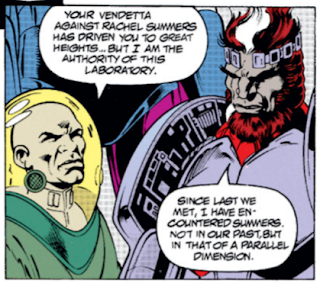 As Phoenix melts off Ahab's hands, he cries out "not again!". This is presumably a reference to something that happened in "Days of Future Present", but I honestly don't remember it. 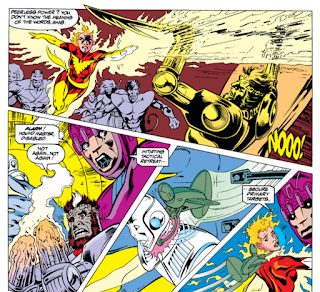 Young Love
Meggan is having second thoughts after seeing Captain Britain without his energy matrix. Brian responds that people are more than their looks, but Meggan counters that he probably wouldn't like it if she returned to her original form. 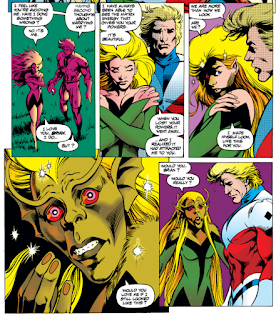 Austin's Analysis
For his final story, Alan Davis returns to Rachel's home "Days of Future Past" timeline. "Days" is a story that looms large over the X-books, and this marks at least the third concerted effort to revisit it, following Rachel's initial return to the present and the expansion of future events, including Nimrod, that ensued, as well as the later "Days of Future Present" story, and while at least "Present" suffered from diminishing returns, Davis returning to this narrative corner of the X-universe makes sense: Rachel is "his" character at this point, and he's spent much of his run building up and clarifying her history & characterization, making a return trip to her timeline a logical course (I'm holding judgement on whether this whole return trip to "DoFP" was worth it until I read the next issue; I've not read this whole story before).

At the very least, he finally ties up arguably the series' biggest (and longest running) remaining mystery right off the bat, the question of who Widget is and where he (she, we know now) came from. Revealing Widget as Kate Pryde not only strengthens Widget's connection to the team, but also calls into question past events in a fun way (recall that Widget sent Kylun to Ee'rath, and the team on the interminable Cross-Time Caper), which is of course what Davis has been doing through much of solo run (ie adding new meaning to past events). Everything else that happens in this issue is mostly setup: getting the characters into the future, and then having Rachel & Widget get captured so the rest of Excalibur has something to do, but the long-overdue Widget reveal, combined with the fun of having Alan Davis drawing futuristic Sentinels, get things started off on a high note.

Next Issue
Next week: Sienna Blaze makes her first official appearance in X-Men Unlimited #1, the Chalker family returns in X-Force Annual #8, and Cable goes back in time in Cable #2.
Newer Post Older Post Home
Posted by Austin Gorton at 12:00 PM