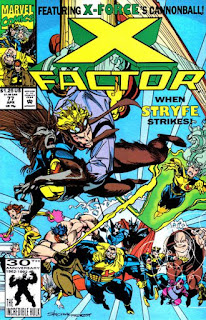 In a Nutshell
The Mutant Liberation Front attacks X-Force.

Plot
At a free clinic, a couple learns from Dr. Tucker that a prenatal test he's developed shows a 55% chance their child will be born a mutant. Meanwhile, the Mutant Liberation Front attacks X-Factor's headquarters, where they're holding Nasty Boys Hairbag & Slab. X-Factor forces them to retreat, but only after they've freed the prisoners. However, as Zero opens a teleportation portal, Polaris is able to grab hold of Stryfe and pull him partially through, trapping him halfway on either side of the portal. As both teams attempt to pull Stryfe onto their side, he uses a hidden weapon to force X-Factor to let him go, and they're left with nothing but his gauntlet. Later, Val and Alex debrief Jamie about his experience with the Nasty Boys, and realize that Mr. Sinister was their leader. Outside, Lorna is trying to get Rahne to open up when Cannonball suddenly flies down and scoops up Rahne. He says he's there to rescue her, but she insists her life is with X-Factor and Alex now. When Lorna and then Alex catch up to them, intending to arrest Cannonball, Rahne pleads with Lorna to let him go, and she does. At MLF headquarters, Stryfe gives the team a new mission: destroy Dr. Tucker, his clinic, and his mutant test.

Firsts and Other Notables
Cannonball guest stars in this issue, having seen Rahne during X-Factor's press conference and believing she's not herself. She basically tells him to bug off (though he's not entirely wrong, as we'll find out her attraction to Alex isn't of her own mind), but helps him escape when Havok tries to arrest him. He also asks if she's seen Rictor, who left to find her in New Mutants #98; he'll pop up again shortly in X-Force. 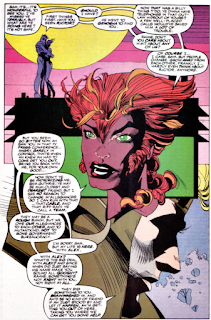 The Mutant Liberation Front, including Stryfe, pop up in this issue, making this their first appearance outside of New Mutants/X-Force, thus making little me believe the MLF was a bigger deal than the short-lived, one-team adversaries they really are. They are motivated to rescue the captive Nasty Boys because Slab is MLFer Thumbelina's brother, a relationship which is established here. 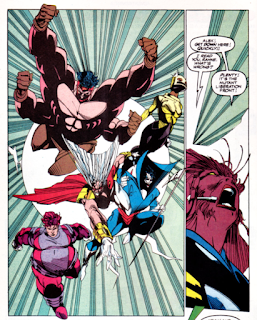 X-Factor manages to get ahold of one of Stryfe's gauntlets, and Wolfsbane finds the scent familiar but can't place it, as Peter David gets in on the "make vague hints about the connection between Cable and Stryfe game" (and is also a nice use of Rahne's history, as she'd know Cable's scent from working with him on the New Mutants).

Discussing the Ricochet/Nasty Boys situation with Madrox, Havok and Val realize that Mr. Sinister was behind the whole thing, something Havok says Lorna is going to flip out about (a reference to the whole "possessed by Malice" thing). Madrox also describes Mr. Sinister as looking like Colossus with a diamond on his forehead. 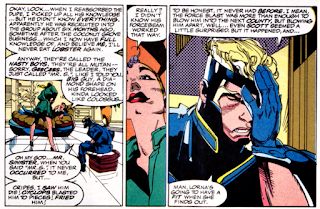 This issue introduces a pre-natal test that is able to determine, with some measure of accuracy, whether a child will be born a mutant, and it will serve as the centerpiece of next issue's plot, an attempt by Peter David to do an abortion story (which ultimately gets scuttled by Marvel higher-ups; more on that next issue). 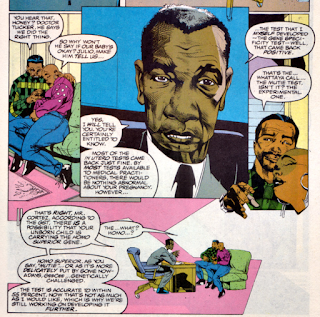 Vic Chalker has completed his battle suit as of this issue, making it large enough to fit inside, and powerful enough to operate. He then proceeds to step outside of his lab, where it starts to rain, and the rain proceeds to electrocute him to death. Thus ends the Vic Chalker subplot, for now, with another Chalker to shortly take up the reins before all this pays off in a future annual. 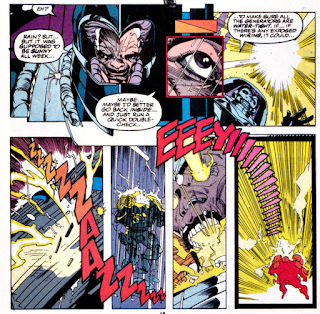 The Chronology Corner
Cannonball appears here between issues #5 and #6 of X-Force, prior to his death and resurrection, whereas the Mutant Liberation Front appears here and in the next issue after the backup stories and main story in X-Force #7 and #9-10.

A Work in Progress
With X-Factor holding Hairbag and Slab of the Nasty Boys, Val Cooper gets into an argument with a public defender over the rights of super-villains, who says that all to often they get shunted off to places like the Vault in violation of their rights, an interesting idea that really deserves more exploration. 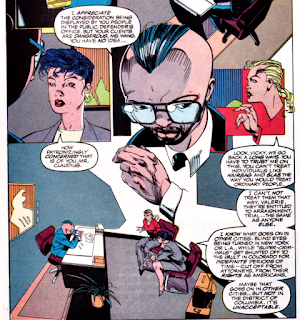 Havok continues to show disdain for the codename "Strong Guy", refusing to use it while giving orders. 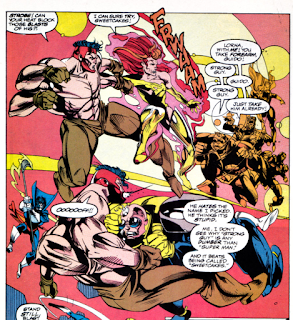 Rahne says she's having a hard time dealing with the events of the previous issue.

The Grim 'n' Gritty 90s
Upon encountering X-Factor, Reaper (somewhat dumbly) believes them to be X-Force with a completely new lineup, something Strong Guy says is going to keep happening until they get their own trading cards. 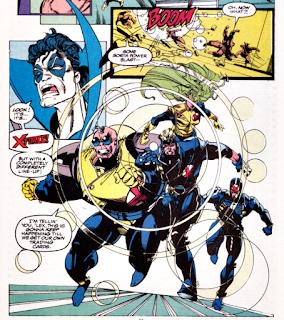 Madrox is mollified over his treatment during the Imposter Madrox situation by the promise from Val of a signed Linda Hamilton (hot off Terminator 2 at the time) picture.

Pun With Peter
The MLF complain that X-Factor talk and joke more than X-Force.

Havok says he doesn't want the team running off half-cocked, to which Strong Guy responds they should go off completely cocked. 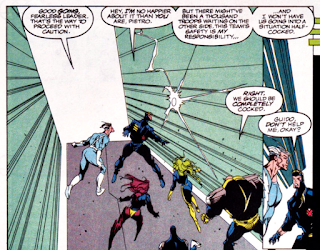 It's in the Mail
A letter writer asks why Quicksilver doesn't wear an official X-Factor uniform, the first of many times that question will be asked.

Austin's Analysis
A transitional issue, this wraps up the previous Ricochet/Mr. Sinister plotline while using the presence of the captive Nasty Boys to introduce the Mutant Liberation Front to this series and setup the next story. In doing so, it also speaks to the history, not just of this series, but of the X-books as a whole. The MLF is ported over from X-Force, helping make them feel more relevant to the larger narrative, and also recalling Wolfsbane;s presence in the proto-X-Force iteration of the New Mutants (she's tackled the MLF below). Ditto the guest appearance from Cannonball, which references the long history between him and Wolfsbane, name drops Rictor and the events of "X-Tinction Agenda", thus makinf the X-universe feel smaller and more knit together.

Reading this as a back issue (next issue would be the first issue of the series I bought off the stands), I didn't always get the references (it would be a few years before I read "Inferno" and all the Polaris/Malice stuff to get exactly why Lorna was going to flip out when she learned that Mr. Sinister was involved with the Fake Madrox), but they helped sell the idea of these books as chapters in an interconnected narrative that stretched back years prior to what I was reading, that these characters had deep connections, not just with their teammates, but with characters in totally different series, which hooked me immediately, and immediately shaped my preferences in comic book stories. Even now, that sense of history and interconnection is powerful and pervasive, and while X-Factor has, since its relaunch, stood somewhat apart from the rest of the line simply on the relative strength of its writing, this issue helps the series fit into that larger tapestry.